As the last components start arriving in the warehouse, we can finally stop worrying about boats being captured by pirates, or sunk, and start talking about the launch, the minis and the future of our new games system.

Mantic tries to offer a great value for money solution to wargaming with lots of figures. We do this by giving away the rules for free, and cramming the biggest pile of models we can squeeze into a box – then offer them at the best price we can. We know many people will proxy in models to use in our games – and our models make regular appearances in the armies from other manufacturers, and this is all part of the joy.

Fate of the Forgestar – 55 Models, 2 Vehicles and 5 Free Steel Warriors!

Some of you may remember when we launched ‘Mhorgoth’s Revenge’ last year – there was not a single new sprue in it – just two armies made from the previous releases, and a rules set. With Warpath we had just a dream! No rules, models and certainly no vehicles!

So there was going to be a seriously large amount of work to get enough interesting, different components to get starter set. Mantic has never launched 7 new sprues, for two armies in one go before. We did discuss rolling through the armies one at a time over the next 12 months then launching the game in 2012 – but we wanted to press the button on the system and let that develop alongside the figure range, so it had as long as possible to be adopted.

So we set about spec’ing the set, and we needed a few safe selections – and a few that raised the bar. Mantic are all about pushing the boundaries! We would need 2 armies – with some kind of support/large kits and one army would need to be entirely new to the current sci-fi scene.

So – back to pushing the boundaries. Well, anyone who has seen the new vehicles for Warpath up close will know just how big (and wonderful!) they are. We have never attempted anything as big and complicated as this before – and whoever had the idea to include 2 in the box game set must be mad (oops – that will be me!). But as they are now in the warehouse ready for packing I am so pleased we did it – I think sci-fi gaming is all about how troops and vehicles interact, and we have now added these kits to our release schedule. We will be doing many more mid-size models, for a selection of the races.

Then we needed a couple of safer bets – we were working on the orcs at the time – so to push them out into space seemed an obvious choice. The sprues were designed to share the torsos and leave lots of room to add variety and choice to the models. 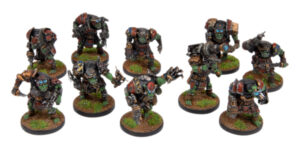 Marauder Grunts – with 40 in the box, that’s enough pieces to add 5 Ripper Talons and 5 Anti-guns to your unit, as well as a multitude of optional accessories.

The Forge Father release however was a wholly different proposition. While people might have some views on what orcs were in the future we had to create a whole new theme and feel for the Forge Fathers. I will talk more about this next week when we focus in on them, but at the start I had to decide what went into the starter box.

At the outset we got the concepts done, and were excited about the whole look and feel for this army – we wanted to get as many units done as we could – and as quickly as possible! Damn those orx! 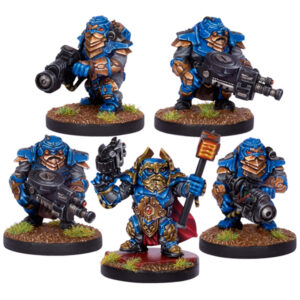 Stormrage Veterans – 2 of each BFG and an optional Heat Hammer means that this unit is packing quite a punch.

As I looked at the concepts, then what we could afford to do for the starter set I realised we could either include Steel Warriors and a vehicle, or Steel Warriors, Stormrage Veterans and a vehicle. When I saw the metal pieces we had made for play testing the decision was easy. This meant the starter game was not only going to have a couple of squads of the basic troop types, the Forge Fathers were also going to get an upgrade unit. On launch they will also get their metal hero, a metal set of Steel warriors, with head, leg and weapon choices, and from January mantic release the Stormrage Veteran section and platoon options, and then the Iron Ancestor…(again more in Forge Father week!). 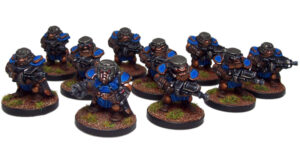 The Steel Warriors – fresh from the painting table and off to the photographers for the packaging shots, Golem sent us this quick snap across to show you guys the new plastics!

As you can see from the photos we think the Forge Father models look fantastic – and with all the upgrades and new releases coming in the coming weeks they will make an unbelievably cool force. For those of you who worry about the legs (and aren’t convinced by the photos!) there are many ways you will be able to build your army with only sci-fi legs.

However, there is no way I would ever want any customer to buy something from Mantic and be disappointed – only ‘overjoyed’ is acceptable when you get a Mantic parcel!!! So, if anyone has placed a pre-order and does not like these photos, please just drop me a line before they are shipped and I will refund you in full!

We are hugely excited by Warpath, and the many very cool releases we have coming up. Next year is dominated by plastic resin kits, with lots of new armies, units, heroes and two more games – and every one is a brand new sprue! Today, for example, I just saw the Corporation Troopers sculpts, and they are nearing completion…