I’m sure we’ve all made some New Year’s resolutions that we’re going to struggle to keep, but how about this for a suggestion? If you’ve never played DreadBall: The Futuristic Sports Game (to give it its full title), why not make 2014 the year you give it a go? I can think of plenty of reasons why that’s a great idea – here are just five of them… 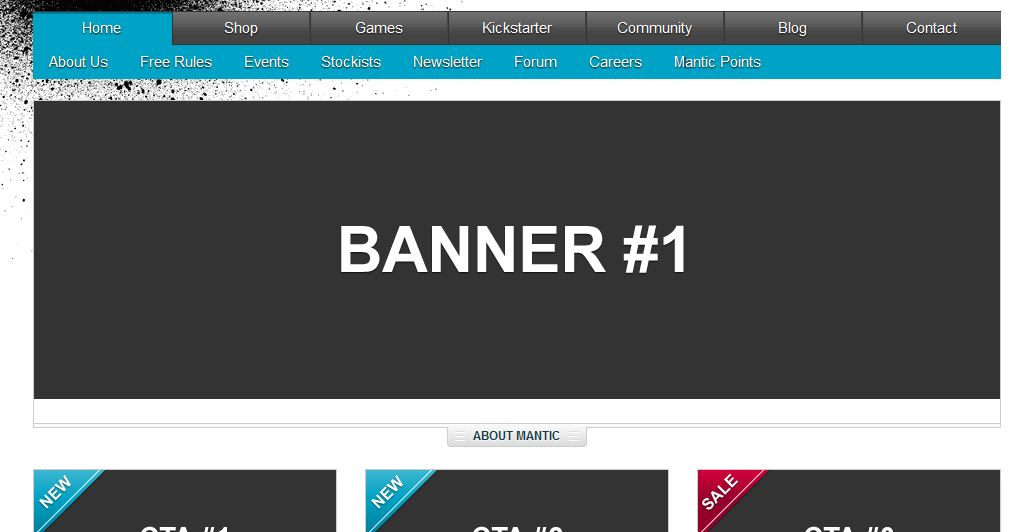 A rare shot of me winning a game!

Hobbies are generally pretty costly to get into, whether you’re into abseiling or… something beginning with z. Tabletop gaming is no different (although here at Mantic we do our best to make it easy for you – especially with crazy nonsense like our New Year Sale!), but with DreadBall you’ve got a self-contained game in a box for £49.99, or as little as £29.99 if you go for the Kick-Off edition! Yeah, there’s a whole bunch of extras to get, like Season books, new teams and a host of glittering MVPs, but there’s nothing missing from that DreadBall Deluxe Edition boxed game. You and a friend can pick a team each (the graceful Corporation or the Slam-happy Marauders) and play through a series of games, with your players levelling up and gaining new in-game abilities, each of which will alter the game experience in a subtle way. That’s an almost endless amount of replayability in one box!

Also, there’s plenty of help out there for new players who want to get their heads around the rules. Beasts of War’s DreadBall Academy (shown above) features a series of episodes, each one focussing on a different aspect of gameplay, ranging from the basics to the more advanced stuff. There are also plenty of others out there – YouTube user Andy2D6 did a series of bitesize tutorials, and our good buddy Bidge also put together a couple of videos on the subject. And we couldn’t forget Miniwargaming’s Learners League! In short, there are plenty of places where you can learn to play.

If you’re a miniatures collector who loves painting and modelling projects, you know how easy it is to get army fatigue. You know what I mean – you’ve just painted your fourtieth skeleton, completing a unit… and you’ve got two more to go. Ugh. Is there anything as dull as painting bone, you ask yourself. Having couple of small projects waiting in the wings can be an absolute godsend at times like this! Instead of moving straight onto more of the same , you can just pick up something different and give yourself a break for a bit! That’s where something like a DreadBall team, or even a single MVP, can work like a charm. Painting a sports team is a very different experience to painting an army unit (you can really go wild with bright colours and corporate logos!), and with only eight players in most team boxes, they make an excellent side project. What’s more, with Team Boosters, Coaches and Cheerleaders, they don’t have to stop there! I’ve met countless players whose collections started with “I’ll just paint a couple of these…” and spiralled into a team of fourteen with full support staff and a custom board! 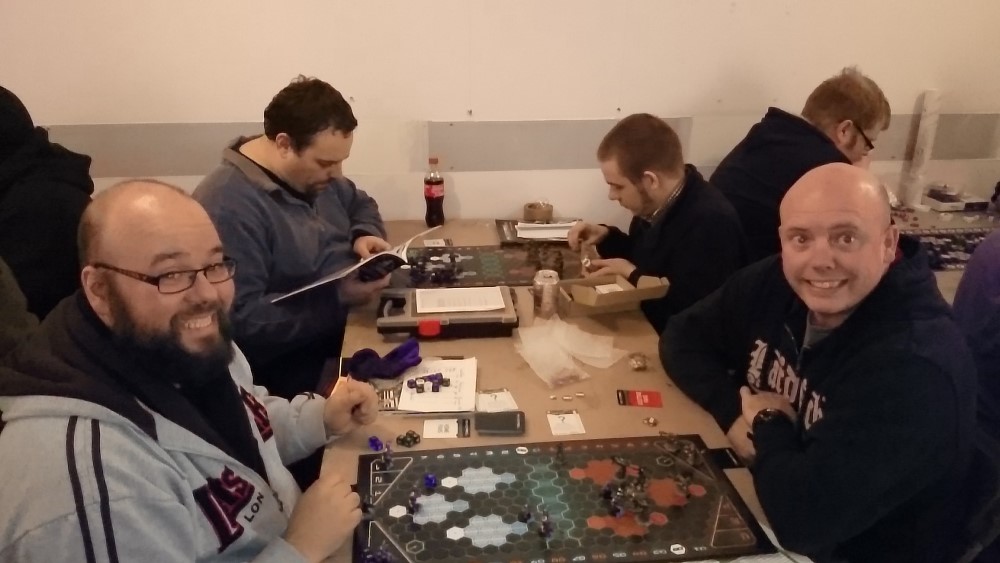 I’m not much of a spectator, it’s got to be said. I’ve always preferred getting stuck in myself to watching others, especially when it comes to gaming. However, DreadBall is a real exception to this. I know I’m biased, but I honestly think it’s one of the best tabletop games to watch as well as play! It’s just like watching a real sports match; there’s tension, there’s excitement, and everything moves fast enough to stay entertaining. For those very same reasons, DreadBall makes for an incredible shared experience. I’m always hearing stories from players who have started up leagues in their local stores and clubs, and they invariably recount their favourite moments from games: strokes of tactical genius, incredible against-the-odds victories and last-minute Strikes. I think that’s why DreadBall leagues are so popular. They’re a great excuse to get together with your mates and create some lasting memories which you can all pick apart later over a serving of your favourite post-game beverage. What’s more, it’s even easier to get other people involved than it was to get started yourself! If you’ve already got the game, they only need to pick up a team (and maybe a copy of the rules) and they’re good to go. Once you’ve got a group of gamers, and you’ve played against each other enough times to hunger for something more, there are plenty of events around the country – and by all accounts, DreadBall events are some of the most enjoyable tournaments around! I spoke to several groups of gamers at the Mantic Open Day in November, all of whom had come to take part in the DreadBall Tournament, and they all commented on how laid-back and fun the games were, even for novice gamers. See what you’re missing out on? 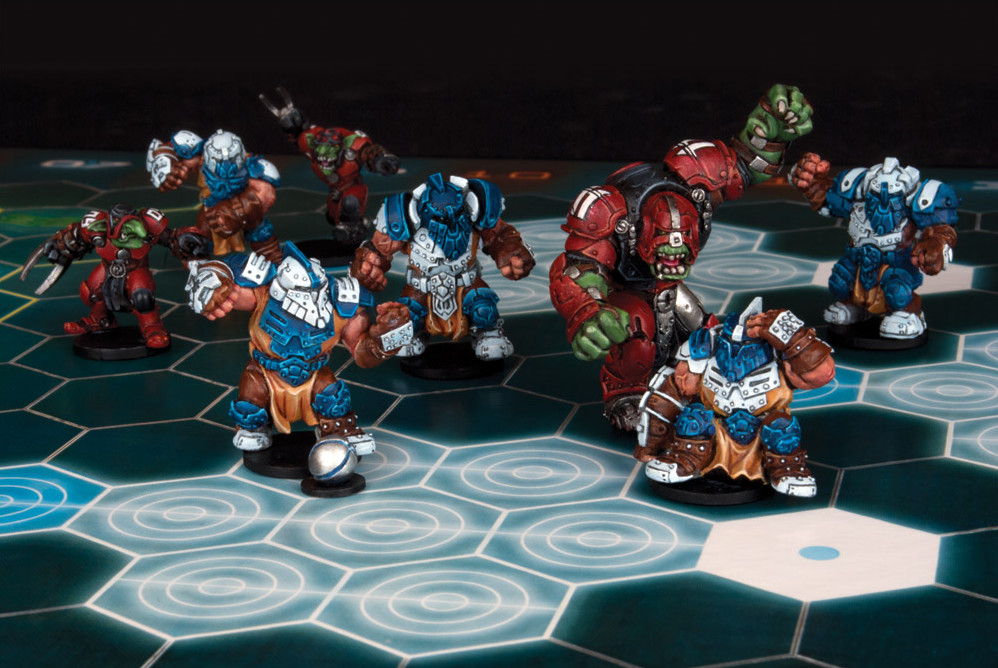 DreadBall is one of those awesome games that’s full of hidden tactical depth despite the fact that it’s easy to pick up. Even after your first couple of games you’ll start thinking up new ways to get around your opponent. My favourite aspect is that the situation is always changing – you can make overarching strategies, but you always need to be ready to react to what your opponent does in their Rush. There’s even more scope, though, once you start taking into account the various options for team building and player advancement that you find in a League or Exhibition Match. It all adds up to a game that is different every time you play it! However, despite all this, the game flows so quickly that most matches take under an hour, including set-up. You can easily fit two or three games into an evening, so even if you don’t attend a gaming club you can invite a few buddies around and get several games in against different teams. That’s fast and tactical covered, but I really should touch on the third point I mentioned – fun. Yes, it’s a tactical game, and yes, things can occasionally get quite serious, but I can’t recall a single game of DreadBall I didn’t enjoy. The dice mechanic and Event Cards bring a delightful random element that leads to some real surprises, and those memory moments I talked about earlier. You’ll find it hard not to laugh along with your opponent when his puny Zee flattens your Guard with an insanely lucky Slam, or when the ball shatters and its replacement KOs your star Striker. That second one actually happened to me – an incredibly unlikely turn of events that just got funnier and funnier, and resulted in us both having to have a five minute break to compose ourselves. Now that’s a game. 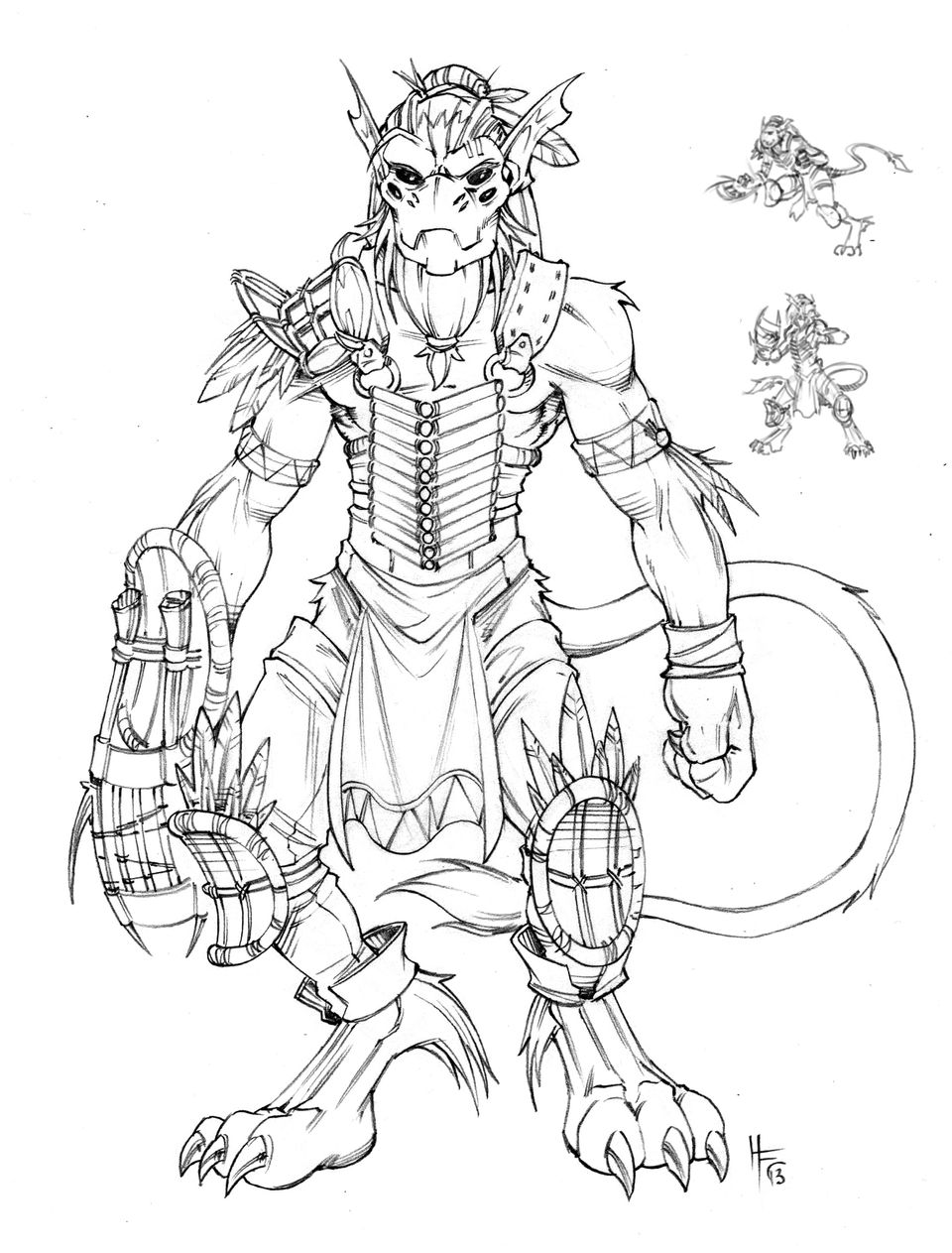 It would be pretty easy to look at a game like DreadBall, with its host of expansions and multiple ways of playing, and think that there’s not much more we could add to it. Well, you couldn’t be more wrong! We’ve got plenty of ideas and we’re planning on continuing to support this game for as long as we can! For example, check out the handsome fella up above. That’s A’Teo Adysi, “The Savage”, a new Striker who will play alongside your team for the right price. He’s part of an upcoming DreadBall expansion which brings a whole host of new rules and challenges for experienced players. We’re going to release packs like these – which we’re calling the Galactic Tour Series – on a regular(ish) basis, with each one adding new optional rules and components to the game. With updates like this, there’s no way DreadBall will be getting old any time soon! Oh, and of course, there’s that even bigger thing we’re doing in the near future… but that’s a story for another day 😉 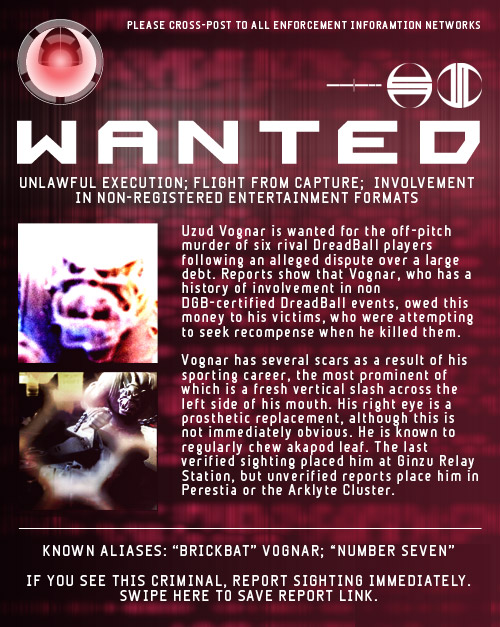 What could this be, eh?

There we have it! Five great reasons to get involved with DreadBall. If you haven’t already, why not check out the Mantic Store and get started today?