I just found out that I’m “Gamer #2”, sounds like a bathroom code. (Mallrats?)

Alright with a plan set (see blog 1), let’s dive in and see what we got in the box. 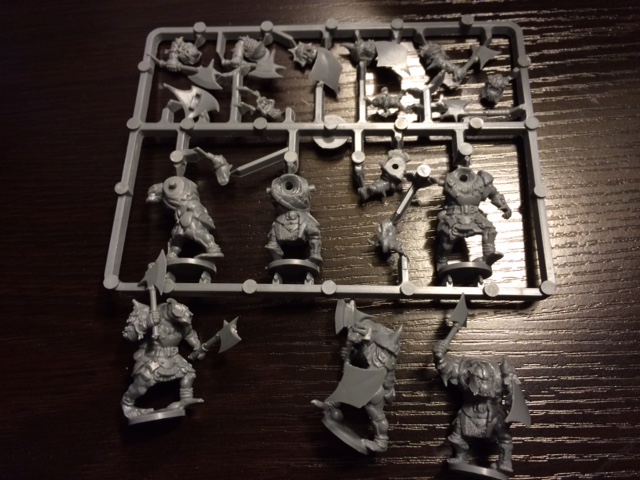 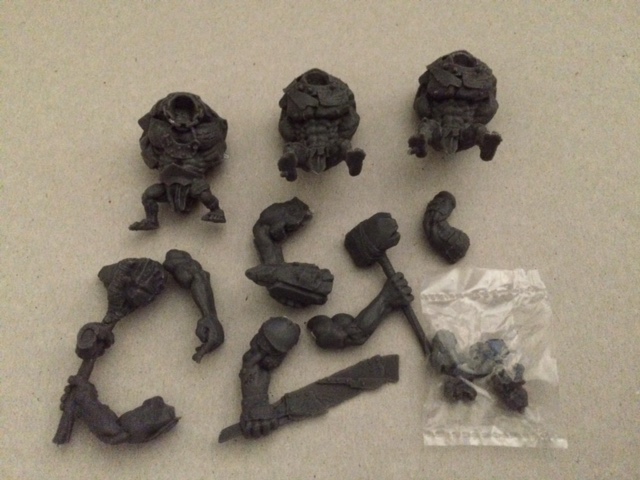 Ax sprue on the left. Trolls unassembled on the right. The Ax, along with the Greatax are hard plastic which means I can use Liquid Cement to assemble (and do some relatively easy conversion work). The Trolls are resin plastic which will require superglue.

I’ve begun the assembly process of these but also need a couple other essentials. To do any type of speed painting, you want to start with a base coat, I use Army Painter sprays as they act as a primer and a base coat. I went with Goblin Green. 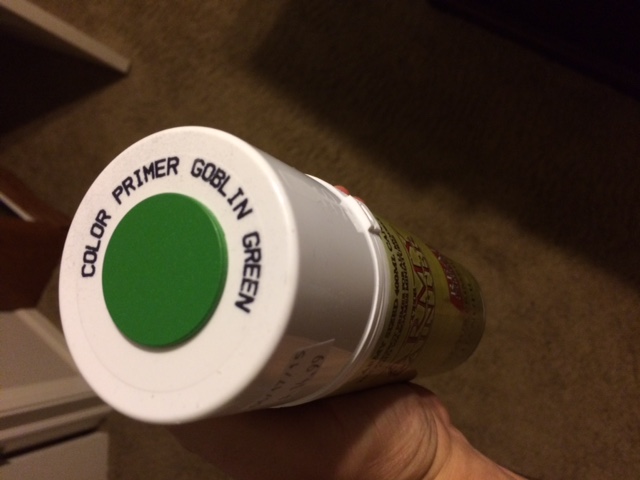 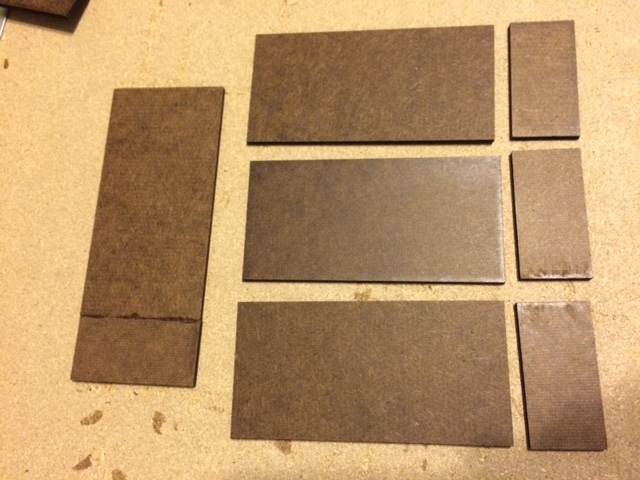 I also needed to start working on bases. I prefer to build units in Troop format, ie representing 10 models. This allows you to mix and match from using them as Troop, combine with another for a Regiment, or combine with 3 more for a Horde. Also, I can paint a Troop size set of models already glued on the base. I can’t do that with models in 3-4 ranks or more. I use a company called George Bases as they are carried at my FLGS, Games Plus. The sizes are on the package. I wasn’t able to find 125×50, but I was able to find 100×50 and 25×50, and the price was good. $5 a bag, smaller the base the more you get in there. So I bought these and will just superglue them together

I love the basic Orc Ax. While they may not have the elite hitting power of the Greatax, or the sheer number of attacks as the Morax, they have 5+ Defense and are cheap points-wise. I can get a horde of Ax for 5pts more than a regiment of Morax.

I started assembling my Ax onto my bases. I’m using 7 models per base. While I don’t believe in a hard rule about number of models, I’ve found sticking to around 7 per Troop base works well. Turns out Orc players get some free Orclings on the sprue already, so while I’ll make a base of them to use in Kings of War sometime, I just wanted to put one in this Greatax’s hand to really show the little guys that he’s the boss. Underdogs only win in movies. 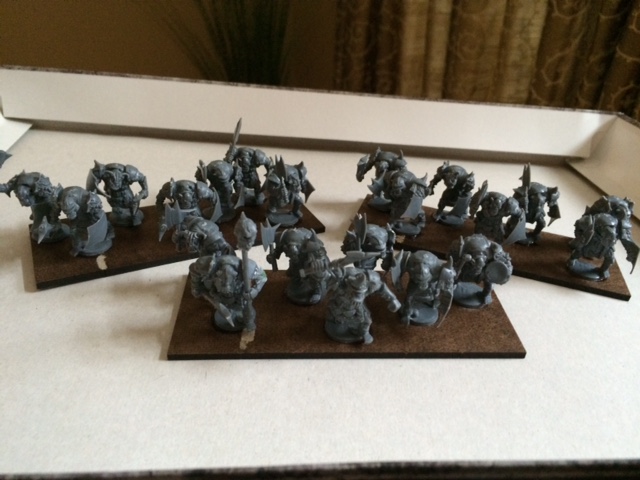 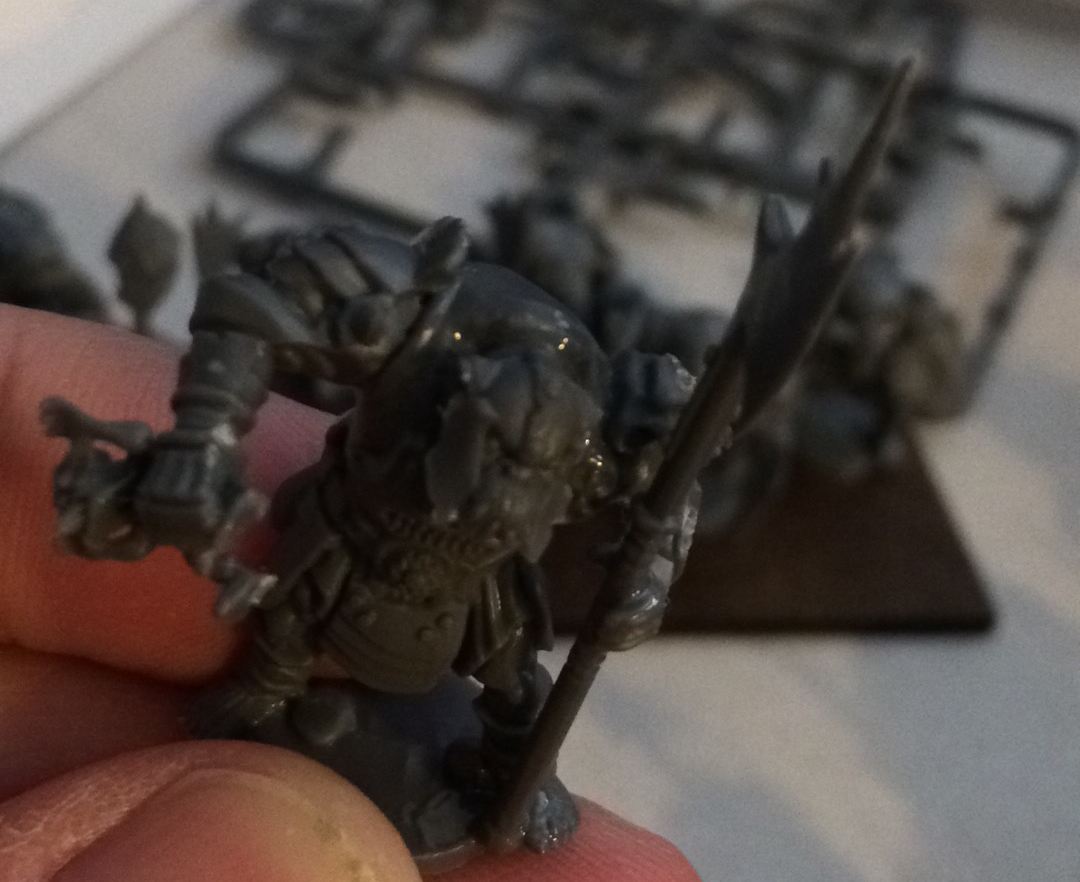 Both the Ax sprue and Greatax sprue give you some flexibility with how you want to build your models. You can mix and match to have some heads and arms on different units, it seems you will end up with extra weapons so you could even cheat and say use 4 Ax as Great Ax by just dropping their shield and adding a 2 handed axe.

Something is missing however. That base in the pic above is too smooth and clean. I picked up some corkboard at my local hobby/craft store and decided to tear it up to act as rocks on the base. This also helps when using less models than the amount they are representing as it’s not only more filler on the base, but also allows them to be in full GI-Joe action poses, climbing and such. 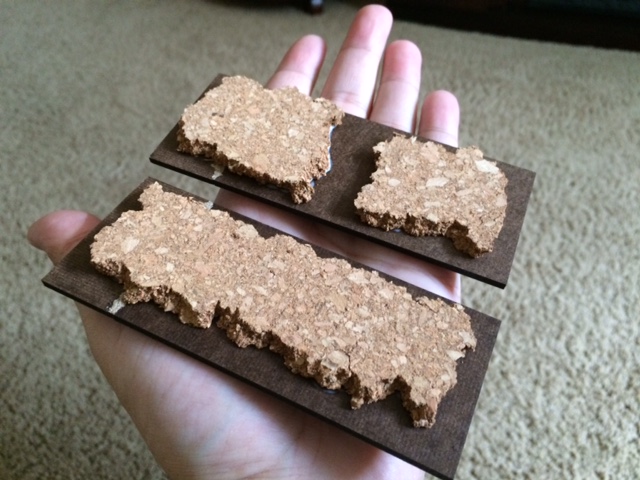 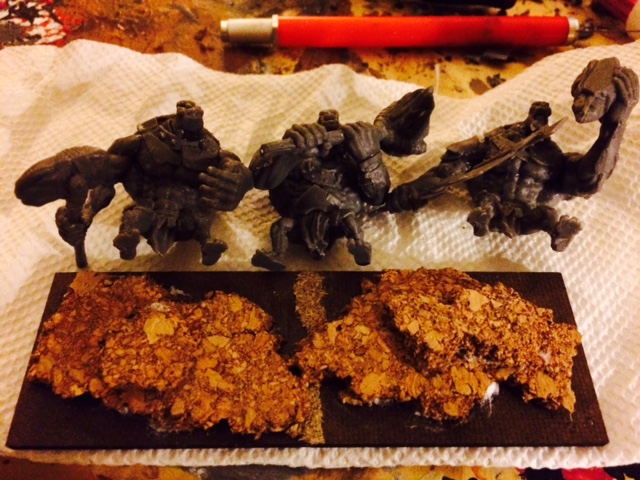 You will need to use clippers and/or X-acto knife to trim the circle bases off the feet. I left a few on as rocks and other basing supplies will cover it up. My rule of thumb is if they are more prominently displayed on the cork/rock, the more likelihood you want just their feet remaining and not the circle part of the built-in base on there at all. 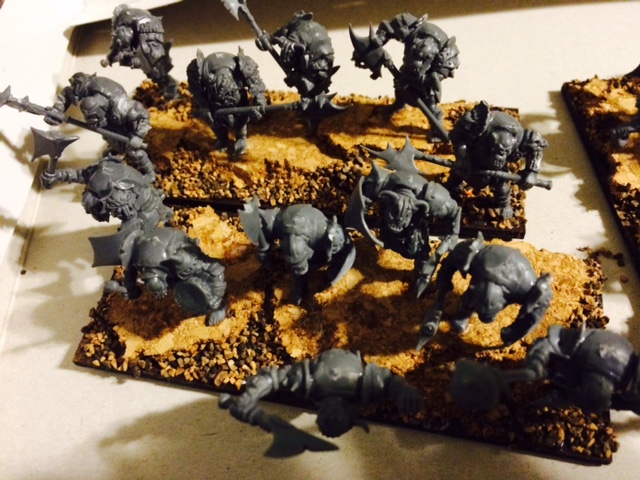 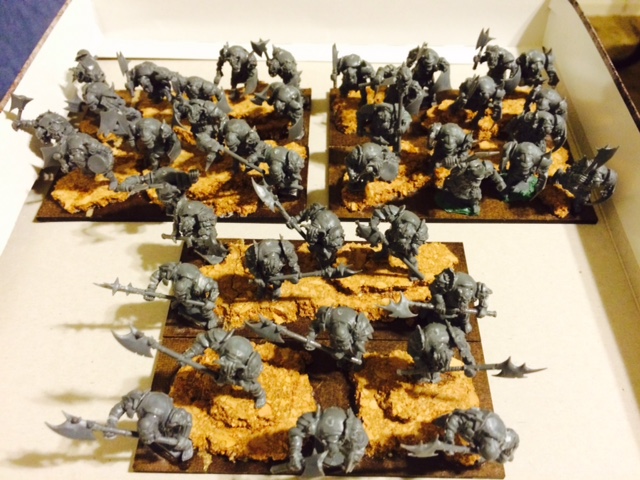 Now that I’ve got my Ax, Greatax, and Trolls assembled, I’m off to play! 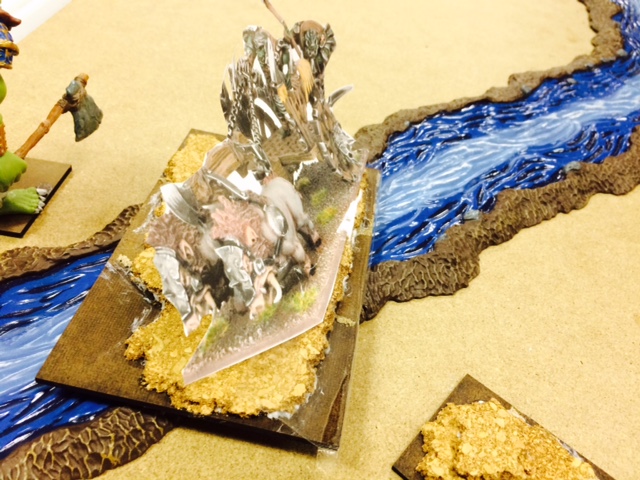 Great thing about practice games, proxy is ok. Here you see a print-out from ManticGames.com representing a regiment of chariots!

Anyways, I’ve played a few practice games with the Orcs, and I’m really enjoying the play-style of ‘fight until there is no one left to fight, then fight some more!

Before we close out this blog, I want to share a few pics of the added rocks I put on the bases and also the basecoat of that Goblin Green. And the fact that it IS EASY BEIN’ GREEN, LOOK AT MY THUMB! 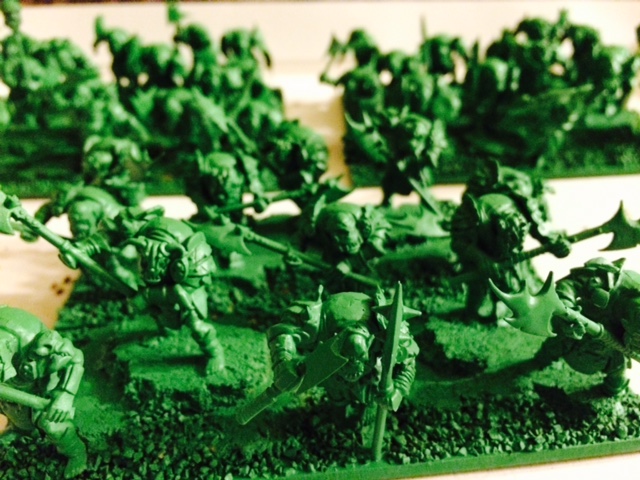 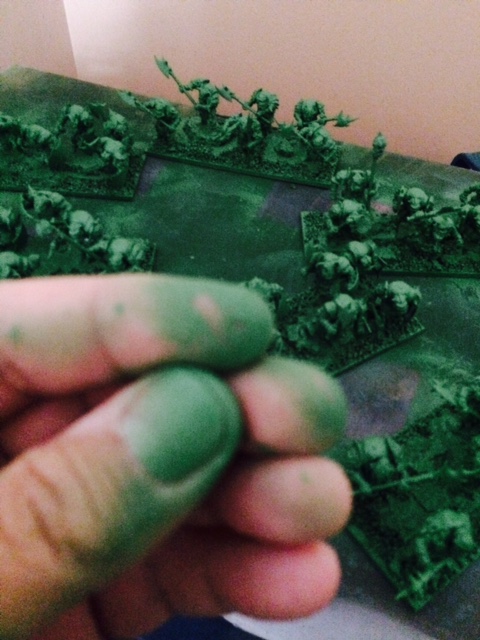 Army will be painted in the next blog as well as some Orc intel (oxymoron?) after playing several games with them.