Bernard Lewis attended the Tempest Tournament and, during the award ceremony, spotted that David Crabtree won Best Army Players Choice with his Dwarf army, based and converted from the Mantic Abyssal Dwarf range. Ever the budding Journalist, Bernard quickly snapped some pictures and interviewed David about his Abyssal Dwarfs, his future plans and what he thought of Mantic. Here’s a sample:

Why do you choose Mantic models for your armies? What’s there appeal?

Being a full time student I don’t have a massive amount of disposable income and I’d been worried for a long time that I would eventually be priced out of my hobby. Fortunately the Mantic models are affordable to people in my position and despite the price they don’t look cheap. As I mentioned before, these days you need a lot of infantry for gaming and it was this that proved most problematic from a financial perspective. I try to get my infantry from Mantic and similar companies as much as possible now, so that I can afford to be a little more extravagant with my characters and conversions. Paying more for a big conversion hurts a lot less when you’ve saved around half the money you would have spent on core infantry! My vampires and chaos dwarfs both use mantic models for the majority of the infantry. 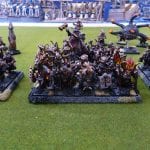 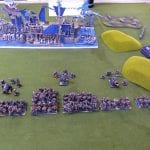 Caught your interest? Well, for more of the interview with David and more images of his fantastic army, check out the full report here!

On the subject of Abyssal Dwarfs; they are some of the sets being affected by the rise in metal prices, so you’ve got until June 21 to pick up say, an Abyssal Dwarf Army Set, cheaply – so order now to avoid disappointment!