Deadzone: Contagion is the new expansion for our tremendously successful Deadzone game. It pits your Strike teams against a new threat, in the form of uncontrollable, multitudinous zombies. 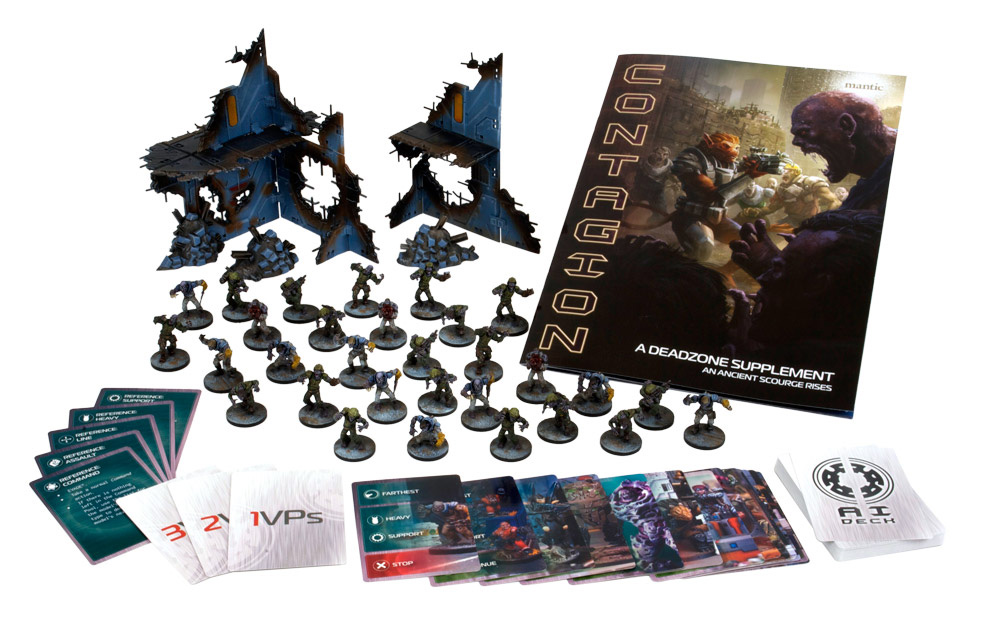 And I mean literally uncontrollable. Coupled with the A.I. deck, the Contagion rulebook contains a new set of rules which provide an artificial opponent for you to play against, as well as an exciting campaign to test your solo skills against the undead hordes. As the undead amass in opposition, do you have the guts and skill to survive the Deadzone and escape alive?

And if Plague Zombies aren’t your cup of tea, then the rules cater for that, too. There is an intuitive system that expands the A.I. rules for use with all of our existing Deadzone Range. You could use these if you aren’t able to find yourself an opponent, or if you are experimenting with a new composition for your strike team, of if you just fancy a unique challenge.

Some of the most dangerous mercenaries in the galaxy are present in Nexus Psi and they’ll often work for only the highest bidder. The latter section of the rulebook has a full page dedicated to six new characters in Nexus Psi, detailing their back stories and any special rules that are unique to them. Paired with the Deadzone Wave 2 card deck, you’ll have everything you need to field any one of these personalities in your own games.

In the same vein, if you particularly enjoy fielding mercenaries, then the Black Ops mission allows you to field not one, but eight of them at the same time! You and an opponent take control of these legendary individuals and engage is deadly corporate espionage to ‘liberate’ sensitive information from a high security vault.