I posted about Salute earlier in the week, and a lot’s happened since, but Mantic was in more than one place last weekend! 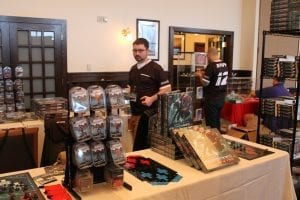 Yes, Ronnie and the gang made their usual appearance at Adepticon in Chicago. As well as giving away lots of subtle hints about Deadzone (I’m sure subtle’s the right word), they also had a chance to show of a host of Mantic games (mostly DreadBall, judging by the photos!)  and meet a swathe of our fans face-to-face. If you want to see what was going on at our booth, why not check out the gallery I just posted on our Facebook page?

It was great to see lots of Mantic models turning up elsewhere at the ‘con. There were several Warhammer tournaments going on, and lots of players decided to use our miniatures (especially Mantic Zombies!) rather than Games Workshop’s own models. This isn’t something you’d see at Throne of Skulls (GW’s official tournaments), so it’s great to see Adepticon taking an approach that lets players use the models they want! I posted several photos of our models over at the Mantic In The Community album on Facebook – have a look!

How have you used Mantic models in other games? Have you used our heroes to represent your roleplay characters? Bought a few boxes of our monsters to fill the corridors of your favourite dungeonbash board game? Drop us a comment and let us know, or send some photos to james.hewitt@manticgames.com!