Sergeant Frank Black looked across the mess that used to be Maple Avenue. His men were dug in among the scant cover, watching out for any signs that the Martians were coming back. He was starting to get jumpy. It had been too long since they’d last seen the enemy.

There was a soft cough from behind him, and he couldn’t stop his hand dropping to his sidearm as he turned. The old mechanic was stood there, wiping his hands on an oily rag and shaking his head. “Sorry, son. Engine’s totally seized. You could drop it on one of ‘em if you still want to make use of it, but it’s not gonna run again.”

Black swore under his breath. They didn’t have time for this. They needed to get to the rendezvous, and quickly. When Ramirez spotted the small parking lot behind the burned-out Gas Showroom, it had seemed too good to be true, and sure enough it had been.

Joe had done his best, but between fire, shrapnel and falling masonry, every one of them had been totalled. He was about to tell the men to form up and get ready to move when one of the sentries yelled out, warning them to get their heads down.

The sergeant ducked into cover of the nearby truck, pulling the mechanic with him. He heard a low droning sound, something so alien it couldn’t be mistaken for anything from Earth, then the saucer came around the corner of a nearby apartment block. It was one of the smaller ones – a scout, or so the science guys had guessed – and it was coming straight for them. There was no way it would miss the squad, spread out as they were. He hesitated, trying to work out the best course of action, but suddenly plans became irrelevant when one of the men opened up.

The saucer swerved aside, changing direction faster than anything Black had seen before the invasion started. He just had time to yell for his men to take cover before the craft returned fire, a lance of superheated energy flashing out towards the squad. One of the men – Miller? – let out a horrific scream, a death-scream, as the rest of the unit opened up. Black swung his rifle to bear and snapped off the safety. If this was the end, he planned on going down fighting… 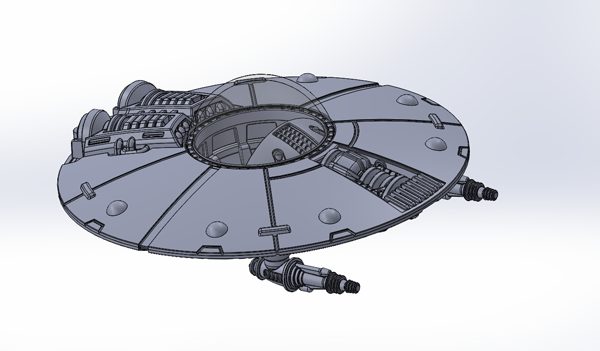 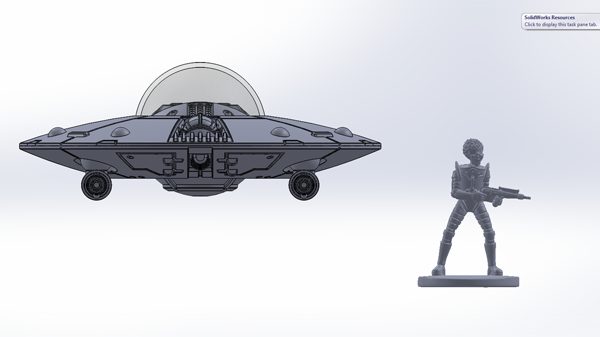 Sitting down on the job…?

This saucer is an iconic Mars Attacks image – pop on over to the Mars Attacks Kickstarter, add yours on, and let’s bust this stretch goal!