After the success of UK Games Expo on the weekend (Dwarf King’s Hold: Dead Rising was a huge success, and the number of people interested in Warpath was massive!), we’ve two more events for June.

First up is Valhalla in Farnbrough, where we’ll have all the latest new releases and a Kings of War demo. This is held on the 19th June.

The weekend after is War Torn in Scarborough, where we’ll have a large Kings of War demo, all the latest sets available, such as the Abyssal Dwarf Army and the new Orcs and Plastic Resin Wraiths, and much more. 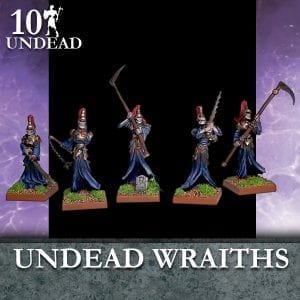 The new Wraiths will be available at

War Torn will be a great day out for the family, and is actually holding a World Record Attempt. From their press release:

A war games club in Scarborough which recreates battle scenarios on giant tables using armies of small figurines, will be attempting to break a world record on Armed Forces Day this June.

The Scarborough War Games Club will be co-ordinating 10 battles which were fought during the Peninsular War of the early 1800s, in a single game, which could see as many as 40,000 figures in play at any one time – a new record for war gaming says the club.

The weekend itself is being jointly organised by the Scarborough club and the Loughton Strike Force and is likely to attract war games enthusiasts from around the country, who will be bringing set displays and introductory games. There will also be a trade show on site, offering a variety of the hobby’s best miniatures and accessories.

And money raised from the event will be donated to the Help for Heroes military charity and the borough’s own Mayoress’s Community Fund which raises cash for a variety of good causes in the area. There will also be a veterans’ parade along the seafront and a host of stalls, events and activities aimed at all the family.

For information on the upcoming shows and events, please visit our Events Diary. Don’t forget to get your tickets for our open day on the 9th July either!