Yesterday was our Open Day, and a great time was had by all!

If you didn’t make the Open Day, we’ve got some really REALLY great bargains here until Midnight Sunday!

Over the coming days, we’ll be sharing lots of stats and information on the events that ran, but for now, I thought I’d share the images of some of the fun stuff that went on.

Ronnie and Jake talked about various things in the seminars, which we’ll cover more in the coming weeks,  but I thought we’d share a gallery of the best stuff that we saw and did at the event.  The studio had an awful lot to show off and everyone was wowed by the figures on display.  Alessio Cavatore, Warlord Games, Mantic Digital and Jake Thornton were on hand to join in on the events.

The shots below were ones either taken by me or, (in the case of the Kings of War photos), Matt Gilbert, one of our Pathfinders. 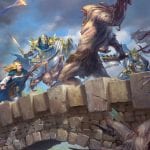 You can find a wonderful write-up of the whole event at GMorts Chaotica (Hiya!) who stopped by to say hello in the kids room at one point 🙂

FistyGlueMan was even in attendance (though I don’t think I met him…we’ll have to remedy that!) and check out what he spotted!