Last Sunday saw what we believe to be the very first Kings of War tournament take place in Germany and the guys kindly reported on the event. Written by Carsten “LutherO” Bar, the original report, including pictures can be found on Brückenkopf: http://www.brueckenkopf-online.com/?p=26024 but with thanks to Timo Heinrich, we have a translated version here for those of your who can’t speak German. Read on and enjoy!

Out of 20 places, only 12 were taken. Still the spirits of players and organizers were high.

The concept of “learning by doing” was well received by the participants. After the first game the players were using the rules pretty smoothly. In the case of questions the organizers were immediately at hand.

Each paticipant had to play three games. There was no limit to the number of turns. After two hours the last turn was declared and the scores then counted.

The record is twelve turns. A good example of how smoothly the Kings of War rules can be played.

The pointcosts of destroyed units were counted, according to the victory condition “Kill!”. 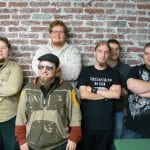 For the lucky winner Mantic sponsored great prices.
But no one went empty-handed, since Mantic provided not only the main prizes, but also dozens of promotional sprues, Mantic Journals and further goodies. These were raffled among all participants.

All in all about 320 Mantic miniatures were given out.

Looking at the results it looked like a fierce content and one we hope was very enjoyable by all who took part. So what do you guys think on a Kings of War tournament? Have any of you participated in a tournament we’ve yet to hear about? Drop us a comment below and let us now your thoughts!