Originally, we’d planned to have Containment Protocols, the Deadzone Short Story Compilation, completed by today – we were going to release it alongside the other e-books that went out earlier today, but due to the frankly insane amount of work we’ve all been doing it just hasn’t been finished in time! Instead, it will be coming out in 2014 – but we wanted to give you a sneaky preview. Kickstarter backers already saw this a couple of days ago, but here it is for everyone else: An Unusual Day at the Office, the opening story from the compilation, by game designer Jake Thornton! 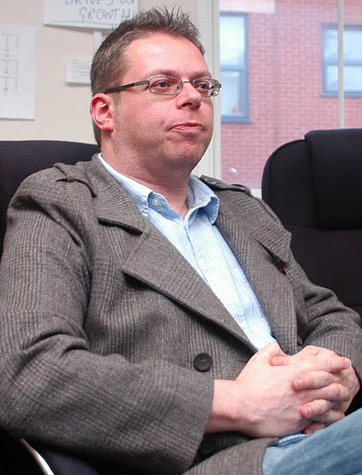 Are you sitting comfortably? Then he’ll begin.

Radchik sat quietly behind his blaster-proof neodurium desk, watching his reflection in the polished obsidian walls of the Councillor’s antechamber. He was smiling slightly, though there was no-one else in the room to see it. Surveillance might notice, of course, though they would be unlikely to even recognise the emotion. They were a dour lot. Still, Radchik was pleased with himself. In his own, quiet way, he had much to smile about.

It had been five years exactly since he was promoted to the position of Conciliary Aide First Class. Five years since he had met the Councillor and first been inspected by the steady gaze of those dangerously unemotive black eyes. He had held the gaze without looking away, and suspected that this was what had earned him the right to work here, at the pinnacle of Corporation government.

It was a lonely job in many ways. He had no living colleagues – security required that there be only robots handling such sensitive documentation. Many of the Councillors had no living aides at all. At least, that’s what he guessed from the names on the memoranda and the way they were produced. There was no inter-office banter, no gossip around the coffee machine, no office parties, and so Radchik knew today would be like any other in the last five years.

The fact that he was here at all was merely a foible of the Councillor who preferred to deal with life forms rather than constructs. This put Radchik at a disadvantage when it came to speed of processing, though he was used to dealing with the various layers of internal politics by now. Mostly that just meant keeping his head down, ignoring the sniping and getting on with things. If he needed defending the Councillor could do that for him better than anyone else. As long as he was worth keeping.

There would be no doubt that the Councillor would replace him if he was found wanting. He strove, above all else, to be brutally efficient and was a man of few emotions. In all the time he had served the Councillor, Radchik had never seen the old man ruffled. “The Old Man”. Radchik smiled again at the thought. He never said the words out loud, but in his head that was how he thought of the Councillor. Old, wise, fatherly almost. Caring for the uncountable billions of the Corporation’s citizens without glory or recognition. The sense of responsibility must be enormous.

Radchik saw the problems as they came into the Councillor’s office, sorted through them and prioritised what should be presented to the Councillor himself and what could be safely delegated to the automated systems below. That was quite enough responsibility for Radchik. Thinking about this reminded Radchik that it was high time he began this process. He began by sifting through the accumulated comms from the overnight traffic. The Corporation never slept, though some of its operatives still had to pause every now and again. There was the usual round of petitions, trade agreements, minor security issues, and so on. A promotion here, a commendation there, punitive measures for cowardice in the face of…. All usual stuff. As they appeared on his screen, Radchik swept them into the appropriate file, mainly following the AI assisted recommendations, but not always. After five years Radchik had learned a lot about the Councillor’s preferences for dealing with certain aspects and leaving others to subordinates, regardless of the official protocol the AI was trained for. By the time the Councillor arrived there would be an accurate and up to the minute itinerary for his day waiting. That’s how he liked it.

Today there were probably only two items that needed the Councillor’s personal intervention: a supposedly minor rebellion on Drentil IV, and a trade embargo of the Snavan sector. Neither looked like much, and it was only because Radchik knew the background and the Councillor’s personal interest in these matters that he raised their priority. The AI would have delegated both.

Radchik had started to collate the complex background information on the various companies involved in the embargo when an alert sound made him jump. Not a fire or a security breach, just a discrete alert, but an unfamiliar one. He checked the screen. It was a visitor.

The alert stopped while Radchik stared at the word glowing quietly on his screen. Visitor? Nobody came to visit. Not in person. Not here. In five years he had never seen another living creature in the office apart from the Councillor. If he had any friends or family they were well separated from his work, as were Radchik’s. No matter how dire the situation, departments communicated digitally. What could be so important that it could not even be trusted to the multiply-redundant security of the council’s own comms system? What could be so dire that it could only be communicated in person? Perhaps it wasn’t dire at all. For a moment Radchik wondered if it had something to do with him, with his five years’ service. In his youth he had worked in offices where there would be cakes and presents for such a thing, but surely not here. It must be something else. He pondered for a moment the many threats and disasters that had crossed his desk and the more he remembered, the colder he felt. If assassination, rebellion, and planet-wide natural disasters were all things you could send a memo about, what was this?

Moments later, on the stroke of 7am standard, the Councillor strode into the office, on time as always. Radchik immediately rose to his feet. The Councillor still looked the same as when Radchik had first met him. If anything, even younger. With unlimited credits at his disposal, the possibilities of rejuvenating medicine were almost endless. He could be almost any age, though presumably chose this early fifties appearance with the salt and pepper hair to impart a sense of wisdom and experience. It worked.

“Five years” was all the Councillor said as he passed Radchik’s desk, and for a moment Radchik thought he saw the glimmer of a smile on his face too. That was possibly the most emotion he had ever seen him show. Today was turning out quite dramatically, and it had barely begun.

As the Councillor went into his inner office, Radchik sat down again and turned his attention back to the screen and its peculiar alert. It showed that whoever the mysterious visitor was they had passed security and were approaching the Councillor’s offices. Radchik felt the first flutter of alarm. He had expected security to hold the visitor until he was summoned, but he was on his way. There was no time to do a background check and find out what this was about. All Radchik could do is hope that the unprecedented intrusion would not reflect too badly on him. He tried to reassure himself. It couldn’t be an assassin or anything like that – he’d passed security. What to do? There was no protocol for this. It never happened. “Still”, Radchik thought to himself, “it is happening. Best deal with it.” He rose from his chair once more and checked his reflection again in the polished obsidian wall. He was smart and well groomed, as one would expect from a Conciliary Aide First Class. He was ready.

The woman that stepped into the room was as nondescript as she could be. Medium height, plain grey suit, mid-brown hair raked back into a tight bun and bland features. She wore no badges or rank markings. She could have been anyone, from anywhere. She had to be 8th Directorate. Radchik’s blood ran cold.

Ignoring Radchik entirely, the woman strode briskly past and opened the door into the Councillor’s inner office. Radchik blinked and unfroze, dashing round this desk to apologise for the intrusion. But when he entered the office he just stopped. The woman had approached the Councillor’s desk and was standing there, waiting. She had moved so quietly that the Councillor hadn’t even looked up from his screen, and it was only the noise of Radchik’s hasty entrance that caught the Councillor’s attention. He looked up, and for the first time saw the grey suited woman. All the colour drained from the Councillor’s face. “You”, he said.

There was clearly no need for introductions. Radchik, afraid of compounding his mistakes simply stood as quietly as he could, hoping not to be noticed. To leave now would only draw attention to himself, and that would not be good. Whatever was happening here was obviously way above his pay grade.

It seemed like a long pause, but it was probably only a heartbeat. Then the woman spoke. “It’s happened”, she said. “Your area. Nexus Psi”. Her voice was even, uninflected by any emotion. The Councillor, started to rise. “I thought we had… ”

“So did we. Apparently we were wrong.” That seemed to settle things. There was another pause, and then the woman simply turned and left without another word. Radchik stood stunned, watching the Councillor.

Forgetting his position for a moment, Radchik spoke. “Sir?” he said. “Who was that?” The Councillor met Radchik’s gaze with his cold, black eyes. “8th Directorate messenger. I haven’t seen one in over seven years. You won’t see them often, but they’re easy to spot as they’re all identical and all have an overinflated self-importance about them. It’s not your fault she came barging in. They always do that. Bloody robots.”

“Oh yes. One of a group that share a hive mind. They make ideal messengers as they simply dump the information onto another one of the group if they’re threatened and then self destruct. You can’t make them talk or bribe them. It really is a secure way to transfer news. And it’s always bad news. The worst. They’re probably all you’ll ever see of the 8th Directorate. At least, all you’ll ever see that you know belongs to them. Not my favourite department, but they have their uses. Unfortunately, this is one of them.”

Radchik was beginning to feel a bit embarrassed by his ignorance. Best to slip back into something more familiar. Following orders, for example. “Do we need to deploy a strike force, Sir, or is it a fleet action?”

There was a pause. “I’m very sorry, Sir. I’m still not sure which sub-protocol we need to invoke.”

The Councillor said only one word. “Plague.”

What did you think of that? Excited for the rest of the stories in the compilation? Let us know in the comments below – and once again, Merry Christmas! We’ll be back in the office on 6th January.