Last week, spent a couple of days with the Beasts of War guys, putting together some awesome Deadzone videos that show off just how easy it is to get involved with our sci-fi skirmish game. In a feat of incredibly fast editing, they’ve already managed to release the first video: a demonstration of the game’s basic rules! Warren and James are old enemies, having faced each other on screen several times across the DreadBall Academy series, and we’re sure you’ll enjoy watching them sink their teeth into a brand new game! 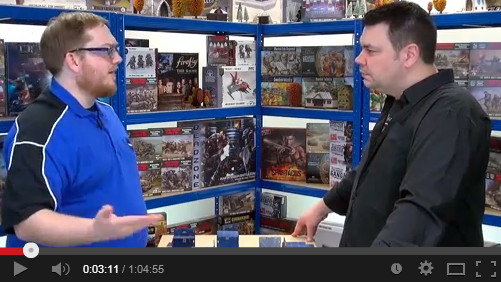 Beasts of War’s Nottingham-based Studio 2 isn’t as big as Studio 1, but that suits Deadzone just fine – after all, it only requires a 2’x2′ area of table!

The video only shows the basics of the game, but it’s really easy to see how quickly you can pick it up and start playing – and just how tactical it can be! (There’s also a hilarious moment which shows off just how deadly explosions are, so watch out for it…)

If you’re intrigued, you can pre-order Deadzone from the Mantic store ahead of release on 14th February 2014. Also, if you got your hands on a copy in the November pre-release (or you were one of our Kickstarter backers) and you want to play along, you can download the Quickstart Rules here! You’ll still need a copy of the Deadzone rulebook, but you should find that the quickstart guide gives you a nice, easy introduction to the game’s main mechanics. Have a look, and let us know what you think in the comments below!