Diary of the Mantic Roadshow: Salute

Our Events Diary is chocker over the next two months so alongside our regular blogs we’re going to be keeping you up to date with everything we’re doing in preparation of the Mantic Show taking to the road again.

I’m responsible for Salute again this year and one of the things we talked about after last years trip was how to make it bigger and better – how to show that Mantic has truly arrived. So we set to work about turning our pitch into a destination stand.

The first part of this was our demo games – we really wanted to show everyone how great the games were, and not just because we said so. We’ve got volunteers seemingly everywhere, which only highlights how great our community actually is. 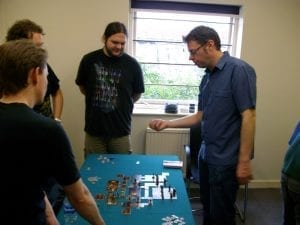 Demo Games are just great fun, particularly when you get to beat/correct the Games Designer.

It’s easy for us to say how great our stuff is, so we wanted those who turned up to the stand to hear it from someone else, and that’s why I’m bringing no less than 3 Pathfinders, 3 people who want to be Pathfinders, and four volunteers from the Chelmsford Bunker, kindly organized by Tom Pugh, all who can talk Mantic and play through Kings of War, Warpath, Dwarf King’s Hold and Project Pandora.

It’s there own figures you’ll be playing with, and it’s there own enthusiasm that will boil over. There’s no script – no don’t say this or you can’t talk about that (as Ronnie’s trips to Beasts of War often highlight), which is really fresh and genuine.

Ronnie and Joe are also at Adepticon the same weekend as Salute.

Of course, myself and Ken will at the show from Mantic, and there’s rumours that a certain Mr Thornton and Orcy might be making a guest appearance, and maybe even a new games designer we’ve been chatting too… but it’s too early to talk about that!

And that’s the other beauty about the shows – we get to talk to you face-to-face about all of the latest rumours and gossip, which in itself is a great reason to see us at Salute/Adepticon/Open Day/Triples/UK Games Expo in the next two months.

Check back tomorrow for more show gossip and why not head over to our Facebook page and let us know you’re coming to see us?