On Tuesday we looked at the Ada-lorena and Crystallan teams – two teams cast in ultra-cool translucent blue plastic!

In this update, we’re going to get to know the Koris and the Tsudochan teams… 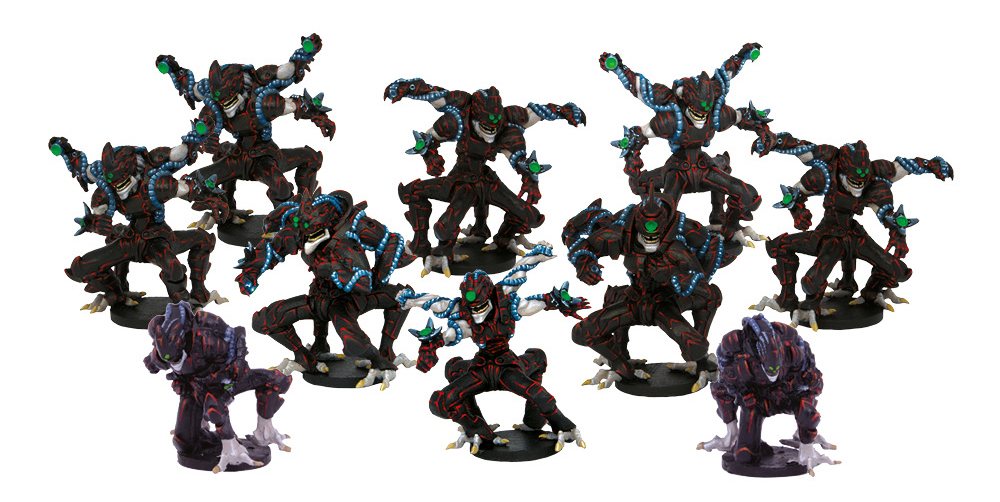 All of the ideas for the Season 4-6 teams came up in a big internal creative meeting, and the Koris and the Tsudochan ended up being two of the most difficult teams to work up from concept to final model.

Ideas for both teams were to do with innovative ways of moving across or manipulating the pitch itself, whereas other teams we’ve looked at basing mechanics around certain ideas: the Crystallans are based around teamwork, the Hobgoblins manipulate the threat hexes etc.

The basic idea for the Koris was that they would have the ability to open up Wormholes that they could use to move across the board. 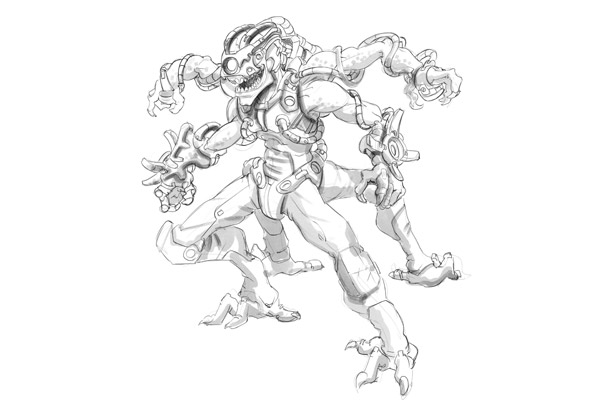 We came up with this idea that they would spin these portals, like a spider would a web, which led to their arachnid appearance.

They are mischievous, utterly alien, and this was reflected in the art by the multi-limbed appearance. The MVP, Kryphos, takes this further with the addition of mechanical limbs to already augment his otherworldly appearance. 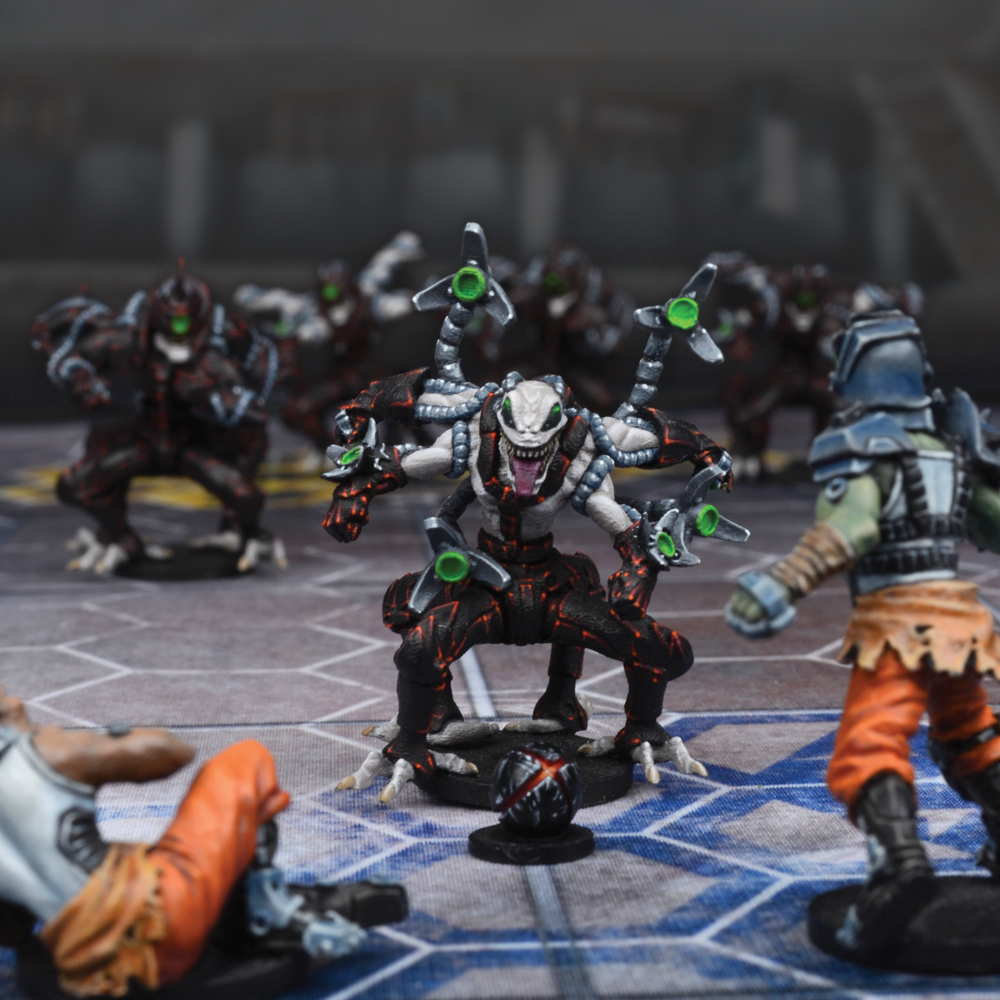 I really like the idea of the Koris as the ultimate tricksters, just opening up portals and sucking anyone unfortunate enough to get too close, and this was reflected in their background and the final rules.

The first thoughts for the Tsudochan original derived from an MVP called Hood, who was a zen-calm monk (Hood would eventually be renamed M’zai Kein.) 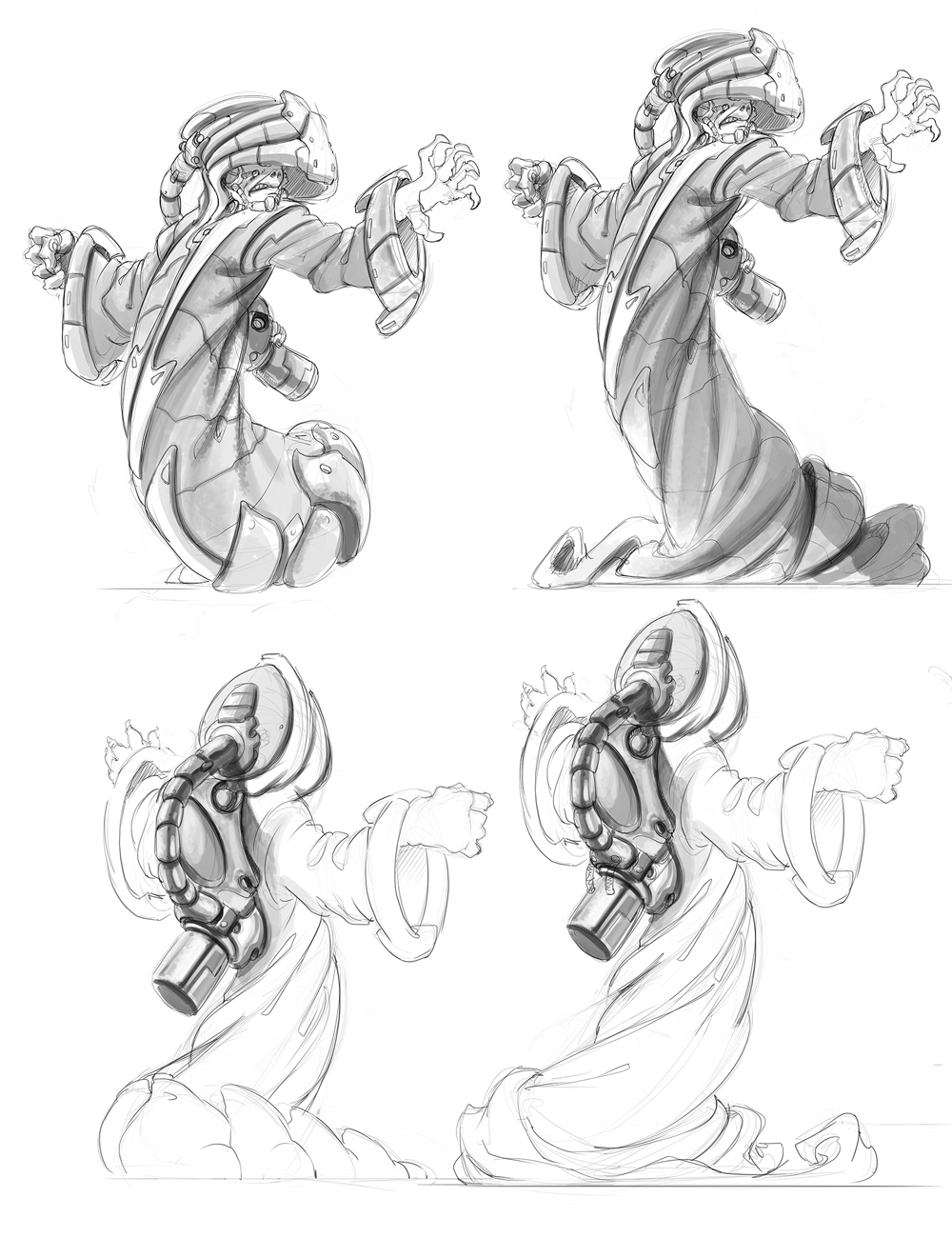 We worked this up into a team of monks who would use their training to be able to move things on the board – they could swing off other, move crates and obstacles, even throw opponents around. They’d have a strength and agility that you’d underestimate (not dissimiliar to everyone’s favourite backwards talking Jedi Master.)

This ultimately evolved into the force-like ‘Push’ ability, which we believed would be more interesting on the tabletop.

We didn’t want another human team, so with the Tsudochan we looked at the range and it became apparent that we could work them up with a reptilian look, which isn’t really something we’d done. 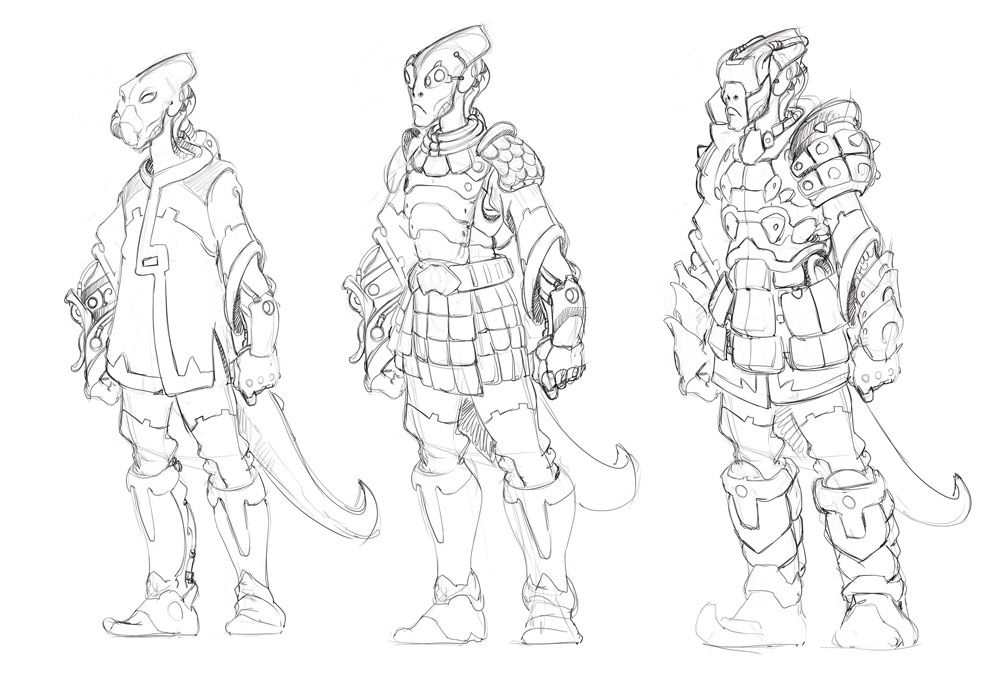 It took a few goes to get right. Firstly, the initial designs weren’t sci-fi enough, and there wasn’t really anything to symbolise or embody their ‘psychic’ ability. This is where we added the headpiece, a device to manipulate the wearer’s latent ability and an interesting element on the model that can be painted to add contrast to the robes. 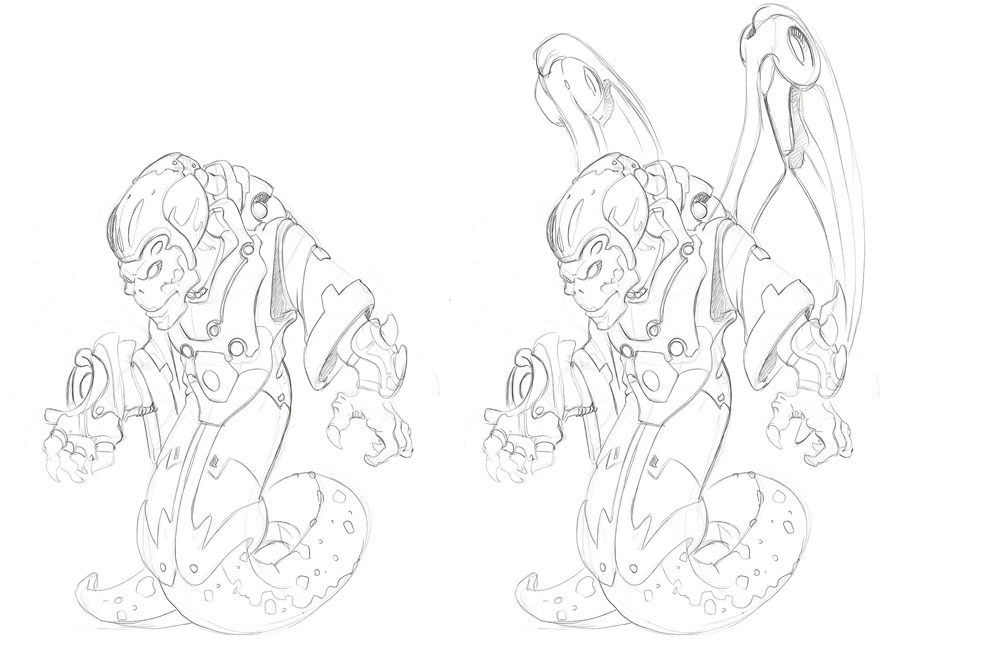 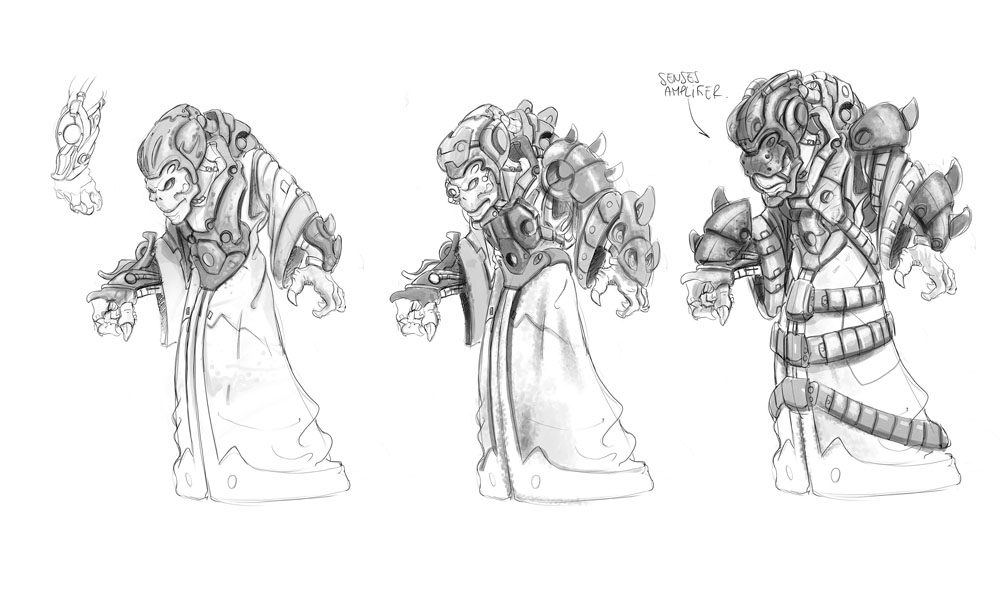 From the concept and design came the rules and background – enter the aliens!

As if teleporting Teratons wasn’t enough, one of the new additions to the ranks of DreadBall teams are the Koris of the Wu-ling Wanderers who can create miniature wormholes through space!

The Koris are a confusing group to study both because of this wormhole technology and their near-inability to tell the truth. In turn, they find the expectation of other races for facts to be unembellished and straightforward to be odd in the extreme. If you have told that story or relayed that fact once already then what good is it to do it exactly the same next time? Surely it would be far more entertaining, intellectually challenging, and simply more fun to add a twist. To spice it up. A change in motive here, a new character there, a new sub-plot, a difference in place or time: it’s like writing a novel, but the raw material is reality.

So ingrained is this tendency to make up stories that almost anything researchers have found out has later been discovered to be a fabrication. At least they think it has. 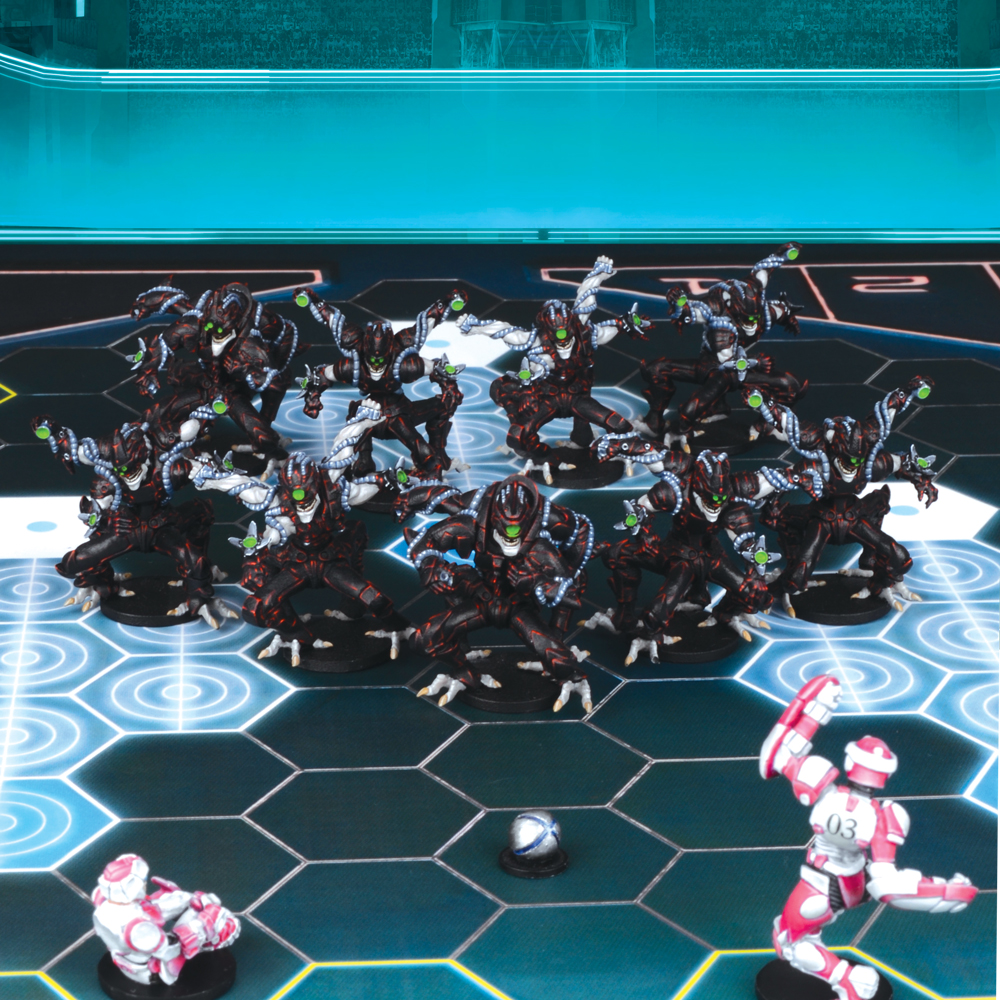 The Fran-Taar Philosophers team came about almost by accident. Having pitched up to the offices of the DGB to attempt to spread the good word, via their usual means of an athletic display of feats of various skill with cunningly masked teachings from their ancient rites interspersed amongst the spectacle, they were spotted by one of the DGB’s talent scouts and found themselves invited to a tryout. Turning up at the appointed time three days later, the troupe of travelling monks found themselves demonstrating their skills to a wider audience than they were used to, and asked to place a small silver sphere into various areas of the space in which they found themselves, whilst avoiding the attentions of various other beings who seemed intent on
taking the sphere for themselves.

Of course, the monks quickly realised what was going on, and as they did so, they stepped up a gear to start performing feats that had the several talent scouts from various corporations who were present to fall over each other trying to sign them up. The monks quickly realised the potential for spreading the word that playing in front of large crowds in televised games might realise. Fran-Taar – a media publishing company – was the lucky corporation which signed them, and has sponsored them ever since. Whether the board of Fran-Taar realises just how much they are quietly advancing the cause of these intergalactic spiritualists is unclear, but if they are, it is likely they view it as an acceptable trade-off for the revenues that the association generates. 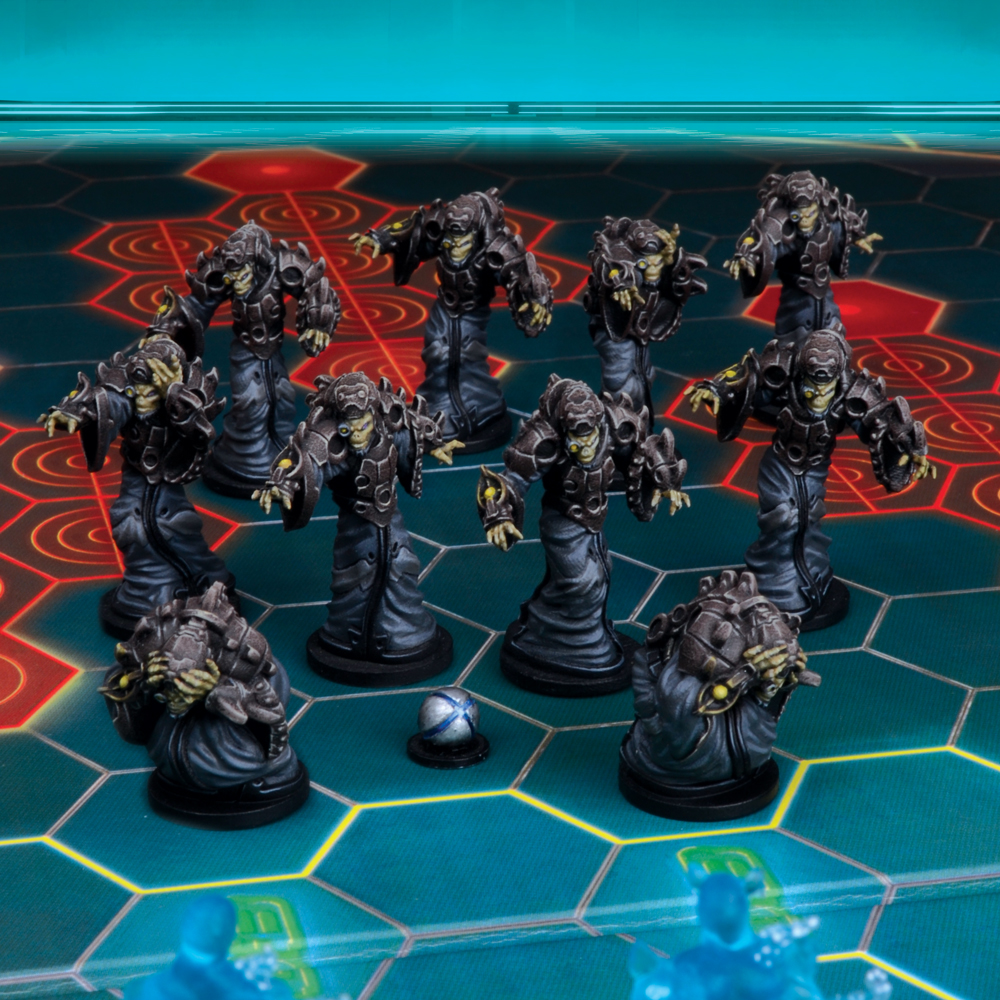 So, with all four teams now detailed, which is your favourite? And what are you looking forward to most about Season Six?

Let us know in the comments.

The new Season Six Book, Teams and MVPs are now available to pre-order from your friendly local gaming store and the Mantic Website.