It seems a lot of you are frothing at the mouth to try and get hold of a Dwarf King’s Hold Bundle before they go the way of Dead Rising and sell-out. After one or two pieces of feedback from those of you who were lucky enough to pick up the first edition of Dead Rising (and the £5 off voucher and rare bone-coloured frames that were exclusive to the first run of the game), we’ve now made a new bundle available for Green Menace where you can get the exclusive web scenario and Dwarf Driller as well! 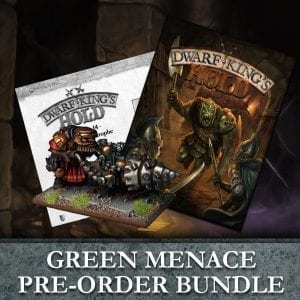 The exclusive scenario includes rules for using the Dwarf Driller in game and is the first scenario where the Dwarfs get to the fight the Orcs, and so requires a copy of both games. Of course, you can also get the Dwarf Driller through the Mantic Points scheme!

This new bundle is only available during the pre-order period, which last until Monday 25th July, so you better hurry up and get yours now! Alternatively, if you’re looking for ane excellent fantasy dungeon crawler to play with the kids, or just to spend an evening with your mates down at the club, the Dwarf King’s Hold: Game Bundle includes both Dead Rising, Green Menace and the exclusive items mentioned above (and of course, we imagine you can build some pretty ridiculous dungeons by combining both tilesets!) – check it out here now!