Grab a beer, and take out your pipe, now hear the story of the Dwarves, my son…

This is the first blog of Dwarf week – we will have news and pictures everyday this week previewing the next Mantic Games plastic army -The Dwarfs.

To start it all off we go to the Sculptor…

‘So we knew that we had to – just had to – make the Dwarfs (is it Dwarfs or Dwarves? – not sure – we’ll use both, not to placate, just to make editing easier!).

Again a lengthy discussion (i.e. much bacon butty munching) followed between me and the folks at Mantic about what we wanted the Dwarfs to be – solid but not fat, strong and bulky.

I also wanted them to have a more sculpted, muscular feel. The Elves have a character all their own, being slender and graceful – the figures are very graphic in their pose and line. The Dwarfs are solidly 3D, they occupy space and all show grim determination – the antithesis of an elf in fact.
Also we saw the Dwarfs as being very different to the elves with respect to our Dragons and other animals. The Elves revere and cooperate with the Dragons – they are their companions and pupils. To the Dwarfs however, Dragons are animals to be controlled or destroyed and used. They see the Dragons as sources of great power and utilise them in that way. Each dwarf as a rite of passage has to take from a live dragon one of its scales – no mean feat as I’m sure you’ll all agree! This scale once recovered becomes the first part of the Dwarfs armour and is the last thing taken from him at death. Some dwarfs of course take more than one scale (greed is good if you are a dwarf) and several of our veteran and champion dwarf models show this. The dogs they care for, but when battle comes around they are quite happy to throw them (literally!) into the melee! 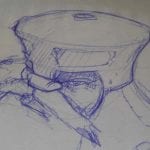 Anyway back to the models. Hammers abound, helms and shoulder armour give them a top heavy appearance and they all stand ready to face their foes, armed to the teeth – full of blood, beard and beer. Plus of course the usual Mantic treatment as far as fun and entertainment goes..!’ Bob N.

(p.s. from the editor – come and see the three-ups at Salute this weekend – and for those who can’t make it, don’t worry every day this week you’ll get more via the blog!)