He's a slippery one!

Everybody knows that Orx and Goblins are hairless. Everybody also knows that they tend to have some sort of inferiority complex about this, and so it is not entirely uncommon to see them sporting implausible looking topknots and mohawks made of artificial hair. Slippery Joe has decided that what he really needed was a moustache, and not just any old moustache. 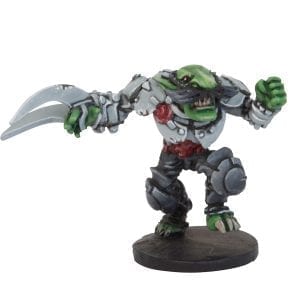 Joe has what might best be called an old music hall villain moustache – a great, black soup-strainer of a thing that sits like a giant slug on his upper lip and which he twirls thoughtfully as he leers at the crowd in what has become his personal interpretation of showboating. And despite his comical appearance he gets to twirl the waxed tips of his moustache rather more than his opponents would like as he is a prodigious Striker. Yes, Striker!

Goblins aren’t normally up to the intense training that it takes to become a professional Striker, being naturally too flighty and nervous. Slippery Joe is one of a very rare breed indeed, and he is almost as proud of his training as he is of his moustache, which is saying something. 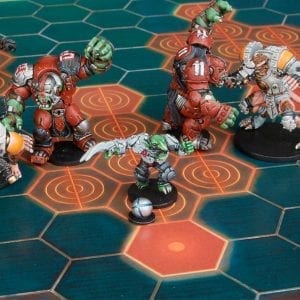 DreadBall – The Futuristic Sports Game is now available to pre-order and will begin shipping late November. Enter our competition to win upwards of £400 worth of DreadBall models.