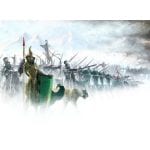 With our very own rules set fast approaching I am sure you are all starting to get your armies ready to play with. What better way to start a new Elf army, or to add to an existing force than to pick up our brand new Army Deal!

Included in this Elf set:

This army deal is available right now! This is a deal we are running for a limited time, so you really don’t want to miss out!