So, here we are gearing up for Dwarf week 3 – but before we do, I just want to give you the lowdown on the  excellent Summer Incursion WHFB Tournament at Maelstrom Games.

Having beaten Ronnie’s dwarfs (that’ll teach him for using non-mantic models – they cause bad dice rolls!) and Mat’s Undead (I mean really, how many Ghouls???), it was my rather plucky Elves who took to the battlefield. 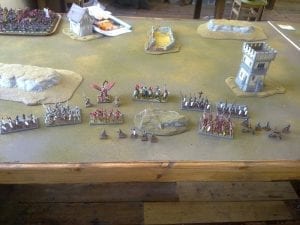 How did it go? Well, it turns out my Elves weren’t so plucky after all…

Saturday saw three games and they were all against a chaos army of some description – the fantastic unoffical Dwarfs of Chaos list, Beastmen and Warriors of Chaos.

First up, Dwarfs of Chaos led by Mark – a game of great guessing from his artillery which just casually led to a pie plate landing on 2 units at once, oblitering them. Nice. A pistol to the face took my Prince’s life and in the end ended as a minor victory for Mark after my Dragon Princes and Dragon ran riot(ish) through some of his more expensive units.

Beastmen next – an army loaned to Tim Fisher by the Maelstrom boss himself. And what an army… 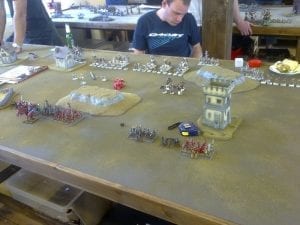 This was never going to end well...

The eagle eyed amongst you may spot the  5 Chariots that Tim had bearing down me, 4 of which at one point plowed into my Spearmen block killing 19, leaving nought but the standard bearer who dutifully rolled double 1 for his break test, holding the beasts in combat – now that’s an Elf! As it was, I expected to win this one but, alas, I couldn’t account for any more points and lost too much in return – Minor Victory for Tim.

So, two *small* losses and onto Game 3, against Guy Ringham and his Warriors of Chaos. I have to say, this was a thoroughly enjoyable game and Guy was an ace opponent, despite not only Gatewaying my injured Prince and his dragon into oblivion, but also my Spearmen block! I started strong but this game ended up having three extra turns which saw my Elves crumble under high strength attacks and Guy securing a top end Victory against me. 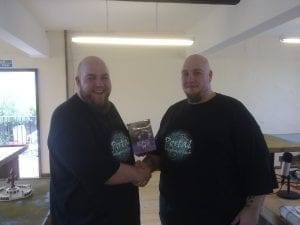 Ed beats his brother Dave to win an Undead Warhost!

Few beers and a world cup match finished the night, and onto Sunday morning where the first game was against Beastmen again and my first of two encounters with the Portal Wargaming Club. To be honest, Sunday was a day to forget – Adrian Wain”s Beastmen taking out my Prince with a horrendously lucky piece of movement, Ben Halford’s beautifully painted Wood Elves outshooting my Army before finally losing to Dave Barfield’s Orcs and Goblins horde (if only we had orcs…) 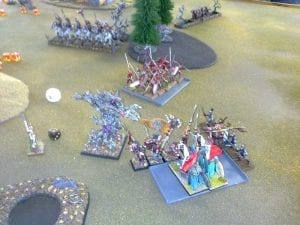 Mmm, was looking so promising too!

So, in the end I lost all 6 games (I figured Ben Currey who does the Bad Dice Podcast needed the win more…) and still didn’t come in last place! I think that was probably the only piece of luck I had all of Sunday. I would be manly and take the blame myself, but it actually was some appaling dice rolls that led to my losses (I mean, seriously, double 6’s when you need one’s? Double 1’s when you need sixes? – You cannot be serious!).

Despite the tremendous amount of bad luck I suffered, the tournament was still a blast and, with a Mantic army no less, my army garnered a lot of attention from passers-by. A fun filled weekend and one I’d thoroughly do again!

Have you been to a tournament with a Mantic Army? Maybe you’ve got one painted up and want to show it off? Well, why not submit us your war-stories and pictures of your armies for our Galleries! Visit the website for more details.

Remember, Dwarf Week 3 is just around the corner!