There’s plenty of skull-bashing going on at the moment – the Dwarf’s are busy fighting with the Undead down in their Hold, and with the new Orcs now out, the Undead have a fearsome new foe to face on the tabletop. This calls for some reinforcements.

In June, there’s a new Undead wave coming spearheaded by the Undead Vampire Lord on Steed and his new Knights: 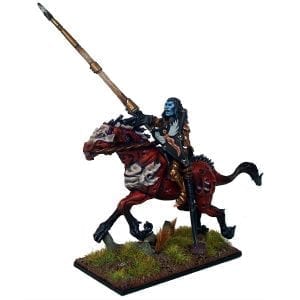 The new cavalry figures are metal/resin plastic hybrids converted from our Revenant Knights. We need a name for these awesome new figures and we want you to choose it!

All you have to do is submit entries to our forum here before midnight 17th May to pick a winner – there might just be some Undead goodies in it for you!

We’ll put up WIP pictures of the sculpts shortly but for now we need a name for our new Undead cavalry figures. Suggestions in the office have been varied to say the least, ranging from Vampire Knights to Vampire Lord on Steed and the Fang-Tastic four…

Let’s see if you can do better, place your entries here!