Five action tokens. Six players. You don’t have to be a maths whiz to see that some of your players are going to do more than others in any given rush. It’s very rare that you’ll feel like you’ve comfortably got enough actions to do exactly what you want at any given time, so you need to prioritise carefully and think ahead.

Those five actions are the foundation of any plan you make. No matter how many free actions you think you can blag with lucky dice rolls, your plan needs to be founded on what you know you can (probably) do. Personally, I like to build my plans around four actions. It might seem like a real squeeze, but it never hurts to have a spare action to compensate for the all-important dice roll that you’re bound to mess up. If you then find that you didn’t need it, you can then use it to buy a card (more on that in an upcoming article) or do something extra on top of what you were planning. 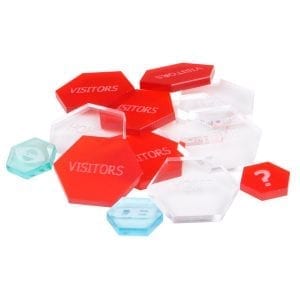 Some of the best players I’ve seen are methodical when it comes to planning their turn. You can see them meticulously counting out their actions before they even move the Rush counter, passing action tokens from one hand to another, following an invisible ballet across the board while crunching probabilities and weighing options in their head. It’s a thing of beauty, and I suggest you look out for it, because it’s one of the warning signs that you might be facing a tactical mastermind.

Golden Rule 2: Position is Nine Tenths of the Law

It’s very easy to be left behind in a game of DreadBall, especially after you score a Strike. You do a little victory dance, move the score tracker towards you, and gloat heartily – then you remember that you don’t get to reset your players, your entire team is either out of position, deep in enemy territory or out cold, and the enemy rush is about to start. 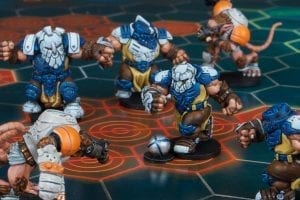 Six players isn’t a massive number when you’ve got a whole arena to cover. In a perfect, theoretical play, you’d want to make sure that you had every hex in the arena covered by a player who could block (i.e. Slam opponents) and a player who could handle the ball. This would give you great defensive flexibility, which I’ll explain a bit better in Rule 3. Obviously, this perfect play isn’t realistic, but you need to keep it in mind as an ideal whenever you move any of your players. Don’t just look at where they’re going, look at the gap they’re leaving when they move. This is one of the many balancing acts you need to think about in a game of DreadBall; is it worth not having a ball handler covering your own Strike Zones if it means you’ve got a better chance of making a Strike yourself? Can you afford to send a second Guard after that enemy player if it means you’ve got no hitting power in his end zone? Are you covering the centre line, ready to grab the ball if either team makes a Strike?

One of the easiest ways to spot a new DreadBall player is to look out for bunched-up players. This game moves far too quickly for group hugs.

Check back tomorrow for Golden Rule 3!