Guy Haley and the creative team have all been in Mantic Towers this week hard at work on Journal 5 – and it looks set to be an absolutely splendid issue! While there will be lots about Warpath naturally, there is also a first class article about the Orc Gore riders and another unique scenario for Dwarf Kings Hold, written by Jake himself! It’s now available for pre-order, before being shipped out next week. 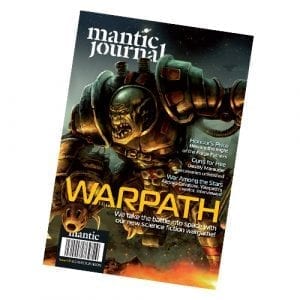 All this work has set me thinking about the Journal, why we started it – and its future, alongside all the other paper proucts we now produce.

Issue 1 came out in the middle of 2010 – and we originally planned for it to be a very occasional publication looking at the new releases from Mantic and other goings on in the hobby world. At this time Mantic had no printed material to speak of – no games, no books – so nothing really to communicate what Mantic was all about. We didn’t even have many people on our electronic newsletter – and when you are starting a revolution you need a platform from which to spread your message (some say drone on – but what do they know!).

However, Guy’s enthusiasm was infectious and before I knew it we had a quarterly Journal (well nearly quarterly – but certainly a regular missive!). At the time, we also got going with our own games, and the newsletter subscribers grew and grew.

I feel at times this has stretched Mantic in a few different directions, and the message has occasionally been fragmented. We have lots of fantastic background, but this slipped between the cracks of the magazine and the game rules – and ended up appearing nowhere!

All the while there have been some other great magazines with real character that now regularly feature Mantic – such as Unseen Lerker here in the UK, Ravage in France and Tabletop Insider in Germany.
So, we are making a few changes!
The first is that issue 5 of the Journal will be the last we print! Those of you who have issues 1-5 will have a very special collection of Mantic history.
Going forward we are going to be generating lots more background and stories to fill out the fantastic worlds Alessio and Guy have created. This will create room for many of the enthusiastic writers who are crafting stories (such as Jonathan P.and Max M.) set in either the Kings of War or Warpath universes. By building the core worlds we create the room for you to build your unique army or story.

This background will be given away to our newsletter subscribers free of charge, and then developed and collated into the core rules sets – so the Battle Books won’t just have an army list – they will also have background about each race, heroes for each army and tactics and stories.

However, we can’t get rid of Guy and his crew that easily! We will be using the Journal team to create an annual catalogue – one book where you can see the whole Mantic range – in full glorious colour.

So, if you aren’t already, jump on over to the newsletter sign-up and get yourself subscribed.