Kings of War arriva in Italia!

Our Pathfinders are a great bunch, and for ages they’ve been doing a great job of running demos and events across the UK (and Norway – Hi Asbjørn!). Well, now they’re starting to appear elsewhere! Joe from the US trade team is launching Pathfinders in the US, and Alex Visentin (a.k.a. reVenAnt) has recently taken up the mantle in Italy. He’s storming it, too – as evidenced by the fact that he’s just run the first official Kings of War Tournament in Italy! He’s even written it up for us. Over to you, Alex!

Hi all! So we finally managed to realise the first Kings of War official tournament in Italy, at Turin… and since this was so great, many more tournaments will follow!!!

The day was made up of three “Kill!” scenarios, 1 and a half hours per game, and an army value of 1200 points. We had 10 players, playing Undead, Dwarfs, Abyssal Dwarfs, Orcs and Elves. Most of them owned Mantic Games models – making big armies has never been this easy!!!

I joined the tournament with a thematic Undead army list, made of THREE Hordes (a Skeleton one with spears, and two of Zombies), a heavy hitter Regiment of 6 Werewolves, 2 single Werewolves, three Necromancers and a Standard Bearer. Really experimental, but I really like Mantic’s new Werewolves and so wanted give them a chance.

It was a long car trip, but I arrived…. 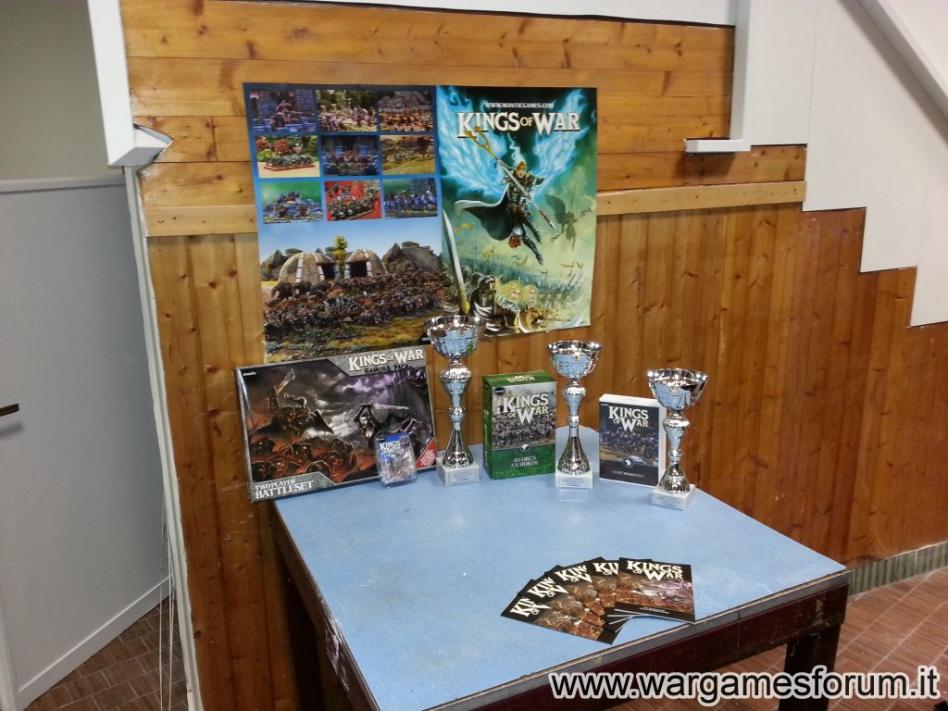 Some great prizes were on offer!

I played a mirror match against an elite Undead army list with Soul Reavers and a Vampire on Pegasus. At the start of the game I was playing a bit too reserved, and gave my opponent a little help as this was his first KoW game. This shows how easy it is to play Kings of War!

With a couple of mistakes per player, and a failed Nerve test on the Vampire on Pegasus in the last turn, we had a draw with the points slightly in my favour, and very few units lost per side. 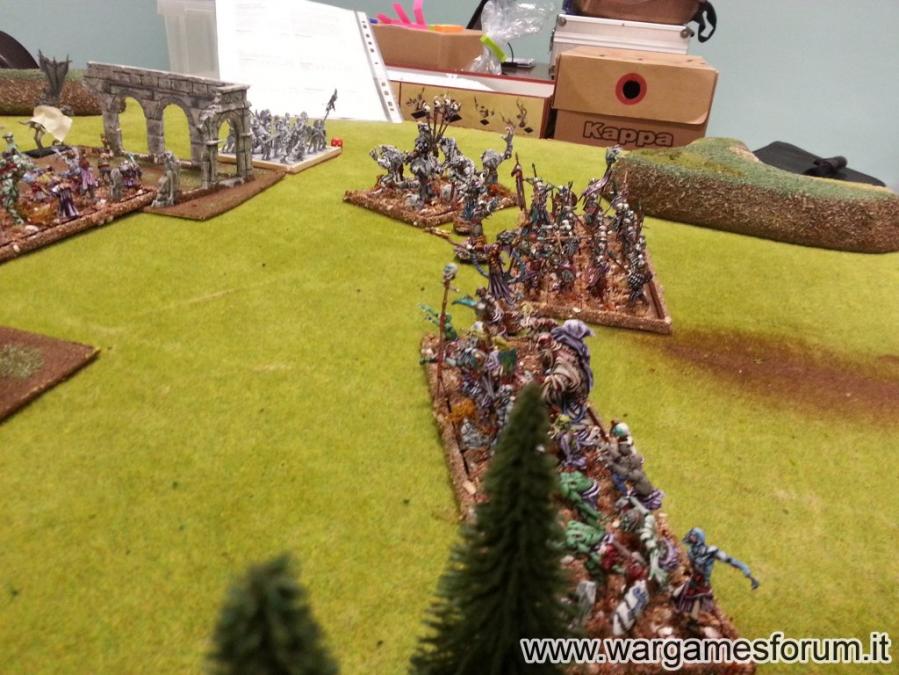 Alex’s Undead surge across the battlefield…

I was matched against ciantru, with a really nice list of Elf infantry made up of lots of Spearmen Regiments, 3 Bolt Throwers and a couple of Mage-Queens. A huge building in the center of the board led me to completely ignore half of the table.

A Horde of Zombies managed (thanks to a total of 13 successes from Dark Surges) to run as fast as Elven Knights (XD) and became a real menace for the Bolt Throwers.
(During one of these attacks I may have won the world record for number of dice thrown, with 30 Zombies’ Attacks trebled against a single Bolt Thrower!!!) The lone Werewolves helped them in that role, but one of them was slain.

Elsewhere, the side I ignored was held by the Skeleton Horde, which managed to kill a Scout unit before being slain. A “top-class hit” from a Necromancer took out a Mage Queen with 2 Zap wounds, and a double six Nerve Test. The Werewolves regiment, which took lots of charges, ended the game alive with two or three enemy trophies.

We had a really tactical and enjoyable match, in which dice helped me a bit – compliments to ciantru!

A victory for me, while at table one there was a draw. 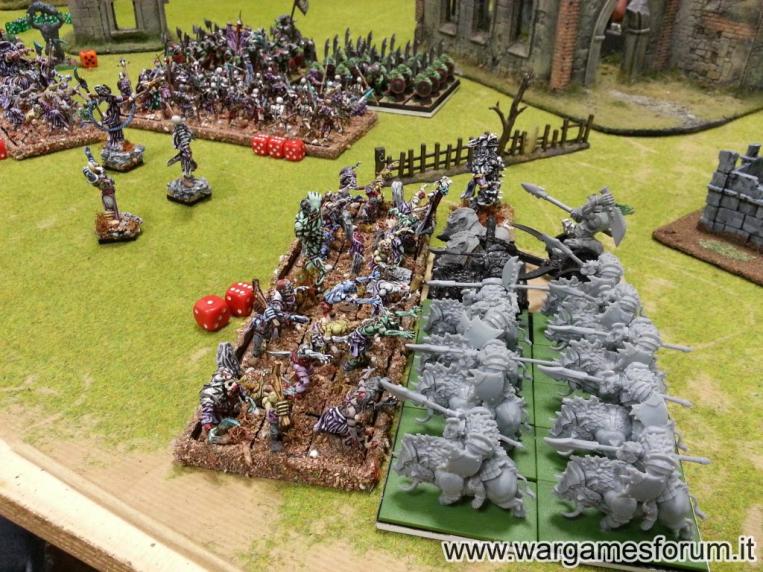 Presumably, those are statues of Orcs. Why else would they be grey? 😉 – James

Really bad match for me! I’d already had a look at this army, and I love Orcs. My opponent had an uncountable number of skirmish units such as single Chariots and single Trolls, as well as Sniffs, lots of Gore Riders and two Ax Regiments. I was almost doubled in term of number of units, so my only choice was a defensive deployment, with the lone Werewolves deployed on the flanks to menace his unavoidable advance.

The first turns were really tactical – only the Werewolves moved around while I stood zapping with my Necromancers. I managed to Rout a few units, but these were worth only a few points! cultistapazzo is a really good and experienced player; I’ve learnt many things from his list and play style, and his movements gave me a headache!

In the last turns I could only take his charges. Luckily my Hordes managed to hold their ground and also deal a few points of damage in return. Luckily for me the game ended at this point, because I was completely surrounded by Greenskins…

When the time came to count points, I was almost sure we had a draw, but unexpectedly we had a 255 points difference (with a win threshold of 240) and so a slight victory for me. The best prize of the day was the compliments from this opponent, who told me it was one of the better KoW games he’s played. For me it was the same! 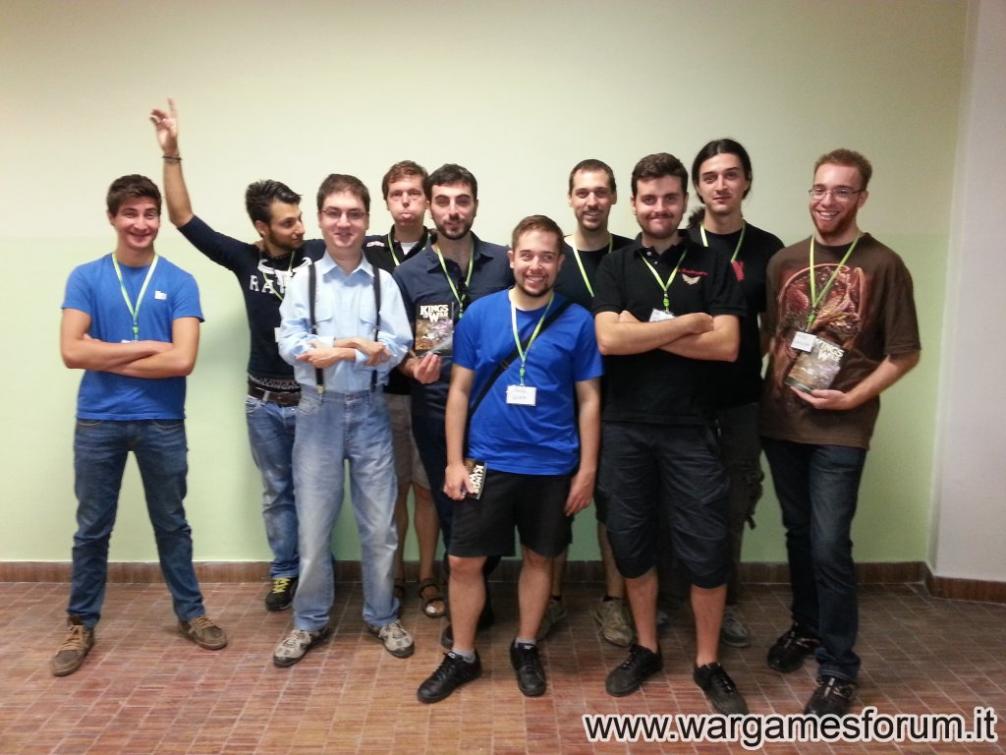 That’s Alex, with his hand up – in response to “So, who do you think came last?”

At the end of the tournament I came second –  a result I’ve never expected! All of the people really enjoyed this first official Kings of War tournament in Italy, the prizes were absolutely great and we can’t wait for a proper follow-up!

Here are the final results:

[I’m assuming these are Forum handles. Or are these their biker gang names? – James]

Regards all,
reVenAnt [a.k.a. Pathfinder Alex!]

Amazing stuff! Make sure you check out WarGamesForum.it – especially if you speak Italian. I’m limited to “Potrei avere un biglietto per Roma?”, but the pictures are still worth checking out! If you’re interested in becoming a Mantic Pathfinder, or if you’d like some help with an event (especially in Italy!) let us know in the comments below!