Hello, Manticites! (Is that the correct word for Mantic fans? Not sure what else it could be. Manticologists? Manticinos? Any suggestions?)

Hope you all had a good weekend. Here in the Mantic office we’re back to the grindstone as if we never left; I’m ploughing through LOKA surveys like a man possessed, Curis is laying out a rather shiny new Kings of War expansion book, and Chris is noticeably absent as he’s left the country for a fortnight’s holiday! Elsewhere in the office, Stewart’s just sent out the Deadzone survey and is trying to keep up with the multitude of replies that that are currently assaulting his inbox. He’s also posted an update on the Deadzone Kickstarter page, showing off a few things that Sylvain (our über-talented in-house sculptor) is working on; here’s a sneak preview! 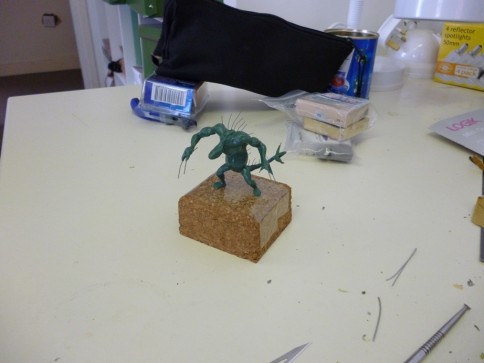 I wonder what it could be…

Anyway, what I really want to talk about is the response I had to the newsletter I sent out on Friday. I asked people to get in touch if they’re Kings of War fans, or if they have a regular KoW gaming group, and so on. It didn’t take long for the emails to start flooding in, and it was lovely to read through them and find out how much people are really getting into the game! A story shared is a story bettered, so I thought I’d share a few highlights with you…

I have recently had a game of KOW (last night) and was shocked at how simple the mechanics were and how easy it was to grasp. I hate playing a game that makes me feel silly for not grasping the rules relatively quickly.
– Joel

Mantic is a success and has set the standard for wargame companies old and new. […] Thanks to Mantic for doing what is says on the tin, affordable war gaming
– John

Once I got [my friend] to try out the KOW rules three years ago it’s become our go to game of choice whenever we are both free!  Also, I’ve been able to pull in a few non-gamers to play KOW with its elegant simplicity – my wife being one of them.  Our small stable of players is slowly growing and the plan is to eventually play a massive strategy campaign with moves, counter-moves, subterfuge, espionage, etc etc.  The reason why we’d be able to do this is because the game mechanics are so “simple” that after months of playing the game, new players feel no hesitancy to try out some more specific and expanded rules/ideas.
– Chris

I’ve been playing wargames for more years than I care to remember, from the very simple to the very complex. KOW is one of the simpler rules sets I use but its simplicity belies a tactical complexity that is really enjoyable and challenging. […] But best of all is the really affordable cost of your miniatures and your unrestricted trading terms for Antipodean colonials such as myself. After paying through the nose for other supplier’s material it is nice to be able to acquire such a large and fearsome force without that nasty “HOW MUCH!!??” feeling.
– John (another one!)

That’s just a tiny selection from the emails I’ve received, and they’re still coming! What’s your Kings of War story, though? How did you get involved, and how did you introduce it to your gaming group? Tell us all about it in the comments section – I’m loving what I’ve heard so far!

Of course, I’ve been telling my own Kings of War story through recent entries on the blog, and regular readers will know that I went away at the weekend with a plan to build my Undead one-player battle set. Well, progress occurred! 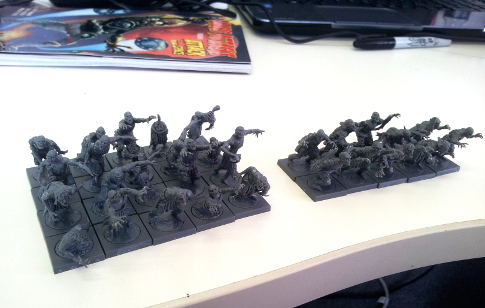 Okay, not quite the progress I was hoping for, but it’s a start! The skeletons are still on my work desk at home, partially assembled. I’ll get some more pictures up when I’m done. Top tip for anyone building Kings of War models – make sure they fit together in a unit! I put each model in its place as I built it, bending or cutting as necessary to make sure it could fit snugly with the models around it. Once they’re painted I’m going to be sticking all 20 of them together on a home-made Regiment base (no ranking up before games for me!), but for now I’ve numbered their bases underneath using my trusty Sharpie so I know where they go. See? I’ve thought this through, and everything!

Are you working on anything at the moment? If so, why not send it to us in a mention on Twitter, or post in on our Facebook page? We look forward to seeing what you guys are up to!