Hi gang! Hope you all had a good weekend, and I hope you had as much fun reading the Kings of War Week content as much as I enjoyed putting it together! I’ve got a couple of bits that I couldn’t fit in by the end of the week for various reasons, and here’s one of them. Jake Thornton, the man behind DreadBall and Deadzone, isn’t someone you might immediately associate with Kings of War. Did you know, though, that he wrote the Advanced Rules section of the hardback rulebook? I asked Jake to give us some insights into the process. Here’s what he had to say! 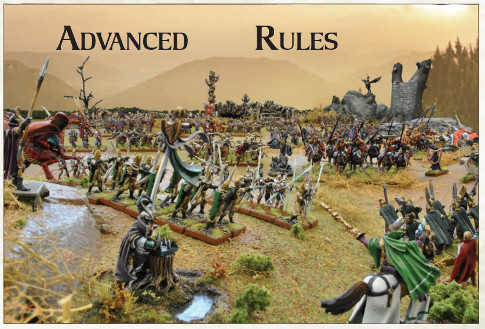 This glorious two-page spread precedes the Advanced Rules section in the hardback.

It’s been well over a year since Alessio asked me if I’d like to write the advanced rules section for the (then) upcoming swanky hardback edition of Kings of War so I had to dredge back through all the other things I’ve worked on since to remember quite how it came about. Ah, the nostalgia of 14 months ago! It feels like so much has happened since then, and out of curiosity I went back to check my files. It was before I’d finished the third box of Dwarf King’s Hold, before DreadBall and definitely before Deadzone – and that’s just the Mantic projects. I’d almost forgotten about Kings of War and so when James asked me to write a little for the blog I went back to re-read what I’d done. As soon as I did it all came flooding back…

So how did I come to be involved in it then? It was as simple as I said: Alessio asked me to do it. He was busy on the core rules and trying to get everything to mesh as he wanted and the advanced rules were a discrete section that he was kind enough to say he thought was my kind of thing. He wasn’t wrong. Multi-player games, sieges, campaign systems and all the rest are just the sort of fuzzy-edged parts of gaming I like to discuss, and so I jumped in with both feet. 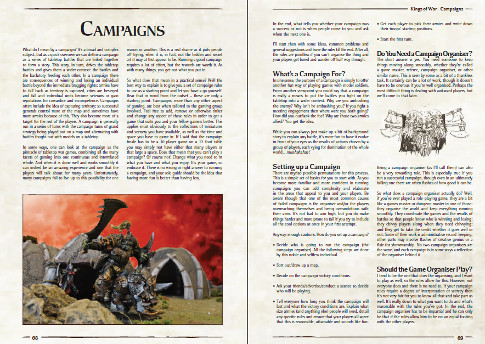 Jake’s like a wise ninja master, dispensing wisdom to one and all but still willing and able to beat you if necessary. (At wargaming, that is.)

Most of this was a process of me sitting and writing out my experience of many, many years of gaming, running campaigns, fighting multi-player battles and so on. These are all areas of gaming that can fall into a number of common traps, so I took the opportunity to offer some suggestions and guidance for avoiding at least the most frequent of these. Campaigns, sieges and the like are viewed by many as the pinnacle of gaming and have provided me personally with some of the high points of my own gaming experience. However they are loads more work than single games and so most folk have had much less experience with them than single two player battles. As I’ve been involved in quite a few campaigns and massive battles over the years I thought I’d try to work out the most frequent causes of failure and let people in on the secrets (such as they are) before they started. The aim was to help them past the teething troubles and into the fun bits with the minimum of fuss.

As well as these discursive sections there was a need for more concrete rules, and there are indeed rules for a simple campaign, more involved terrain rules and a whole system for sieges. These are all useful pieces, though I personally think that the guidance is more useful. Certainly, when I was doing this sort of thing as a young lad I could work out my own campaign mechanics pretty easily, but I fell into each and every one of those pitfalls I mentioned because I had nobody to guide me around them.

One thing that many of these subjects have in common is that providing hard and fast rules for them can be tricky. They are all complex and hugely mutable, and depend a great deal on your personal collections of armies and terrain as well as the personalities in your gaming group and how long you want to play for (both in terms of a single game and campaigns). What this means is that any set of rules is likely to need some tweaking to deal with the local environment. You are therefore encouraged to tinker with the rules to make them fit your specific group. I’d encourage this anyway as it’s a fun thing in its own right, but it can be quite important when you’ve decided to fight a siege and haven’t got any city walls. Improvisation can be fun, but also leads to all manner of strange circumstances, and the rules are unlikely to have foreseen every possible permutation of the battles you can fight with your personal terrain collection. With army lists to follow and sets of miniatures to buy, these sorts of things crop up very rarely in two player games, but in multi-player games, sieges and campaigns they’re far more common. And don’t get me started on the variations of individual pieces of terrain. 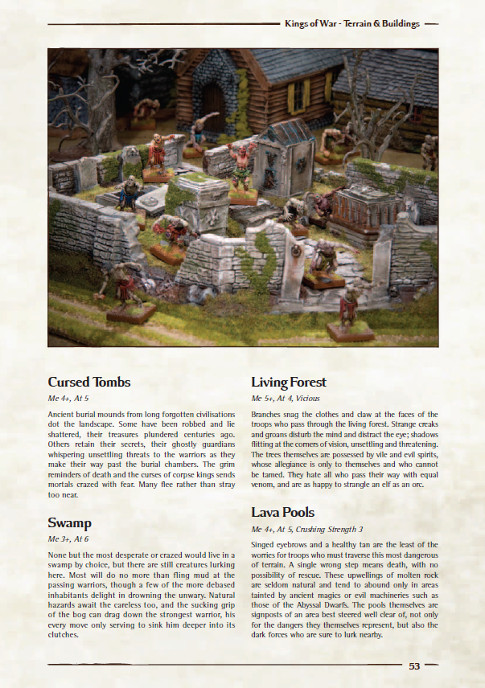 Sieges are an interesting area because we’re not so much dealing with a siege as with an assault. Sieges were mostly about starving folk out over weeks and months or even years. Not much fun for an afternoon’s gaming. Instead, the unspoken assumption is that you’ve given up on all that waiting nonsense and gone straight for storming the walls. After all, you did bring the ladders and it would be a shame not to use them.

My aim was to include sufficiently varied options for the walls, gates and towers so that whatever you had in your scenery collection would be usable. This enormous variability is one of the real challenges here. How to write something that works as a game but uses an unknowable set of ingredients? Defining things as sections allowed pieces to be destroyed and breaches to be smashed so the assault could pour through as well as accommodate pretty much whatever you might have to hand. All good stuff.

Overall the advanced rules section aims to open the doors into a world of possibilities beyond a straightforward clash of two players and their armies. I had fun writing it and I hope you guys have as much fun exploring what is possible in the embattled world of Mantica.

There we have it! Some interesting ruminations from Mr. Thornton there. Have you tried out any of the advanced rules? If so, let us know what you think in the comments below!