Merry Tuesday, one and all! Kings of War week is in full swing, and we’ve got lots more lined up for the rest of the week. I hope you enjoyed yesterday’s coverage; if you missed it, we delved into the history of Kings of War and looked at how the rules grew from a sheaf of notes to a glorious hardback book. Speaking of the hardback, that’s what we’re taking a look at in today’s posts!

The Kings of War rules have always been available as a free download, but any wargamer will tell you that you need more than rules to create a proper game. A big aspect of wargaming is the narrative element, no matter the setting. It’s a very time-intensive hobby, and those long hours spent building and painting your miniatures are a lot more enjoyable if you can give your units a backstory, but that’s not easy when there isn’t much information to go on! The Kings of War background existed for a long time as short pieces of fiction on the Mantic website, but it was clear that we needed to weave them together and maybe revise a thing or two. Thankfully, we didn’t have to look far to find a writer who was up to the task! 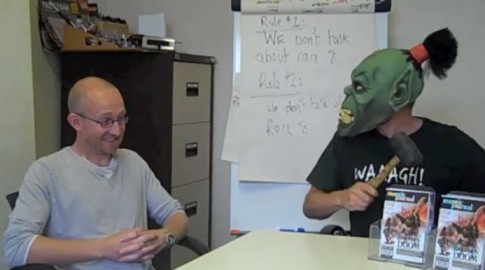 Guy Haley is a well-known author and editor, and he was an ideal choice to pick up the various threads and work them into the world of Mantica. He was the editor of the Mantic Journal for its entire run, so he was ideally placed to look at what already existed, make any alterations that were necessary and magically create an entire world! We asked Guy to walk us through his creative process back when the rulebook was released, and he had this to say about it:

How do you make an entirely new fantasy world for a wargame? That’s a question I had to ask myself when Ronnie at Mantic commissioned me to piece together an overarching background history for The Kings of War rulebook.

I’m no stranger to worldbuilding, I do it all the time in my own fiction, but creating something for a wargames system is a bit different to making a world up for your own stories. Game worlds come about in one of two ways – they’re either planned out in detail by a small group, or they evolve from the ideas of many gamers over the course of years. Both continue to develop organically over time, of course, but only some start that way.

Mantica came about by a hothoused version of the latter; organically grown, but at speed. It involved the input of quite a few people, all whose ideas were somewhat different. This is a good thing, as gaming ideas born from the brains of the many are generally more involving than those that spring from the few.

It was my job to pull it all together.

Standing on the shoulders of giants

I’ve been involved with the world of Mantica from near the beginning. In fact, I came up with large parts of it while we were making the Mantic Journal – I came up with a rough outline some time ago that formed the basis of the final version in the book, I drew the map, and I wrote the history for the orcs and dwarfs from scratch, among other things.

With a project like this, you’re always drawing on the ideas of others. For example, much of the undead and elf material had already been written when I came on board. This material provided plenty of detail, while their histories were fortunately vague enough to stand adaption.

Other directives and bits of background material came from the models themselves. They were designed to a brief after all, to fit a certain look and evoke Mantic’s ideas of what an elf or goblin should be. Further concepts came from Alessio Cavatore, the writer of the rules. In most cases he decided on a direction for the armies, and wrote a list to suit. So I knew, in the main, how a race looked, how they fought, and what their traditions of war were. I’ve had conversations with Ronnie and Alessio about the world and how it works, with both of them giving input and ideas to my suggestions and coming up with major elements themselves. The Abyss, for example, a key part of our world, that one was Alessio’s. The rest, particularly the history of the world, was up to me. 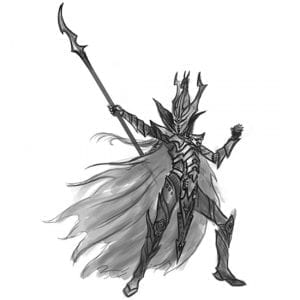 There’s a big danger when creating fantasy that it doesn’t immediately slide into cliché. Elves, dwarfs, orcs, men and more, all living on one world… Pick up any sub-Tolkien fantasy trilogy and you’ll find variations on the theme. A wargame, especially a fantasy wargame, demands the full menagerie, and there are certain apects of each creature you can’t mess with. A dwarf is never going to love an orc, otherwise you might as well call them both something else. The trouble is, there are some highly original wargames out there that have all manner of different characters and species, but they’re not particularly popular. I completely understand why – when I play a fantasy wargame, I want to play out battles between haughty elves and wicked monsters, not refight the last stand of the cat people of Mew-mew. That’s not to say that cat people aren’t cool, but they’re perhaps not wise business.

The difficulty for a writer in this situation is not to come up with something that’s completely derivative. You want to employ heroic fantasy archetypes, not rearrange tired cliché. There’s not a great deal of room for manoeuvre, but sometimes having strict boundaries drives creativity.

Firstly, I tried to make Mantica obliquely topical. A lot of the fantasy games and books from the 80s that are still popular today play upon apocalyptic themes, many indirectly inspired by the then-prevalent fear of nuclear war. Fantasy needs a threat, a reason for conflict, it’s a defining part of the genre, so I plumped for something similarly world-ending – environmental ruin. Mantica is a wreck, reckless elven magic in the dim past caused half its gods to go insane, and precipitated a series of terrible wars. There was a magically induced ice age, a great inundation that drowned many kingdoms and all manner of other upheavals. Most of the remaining societies in our “present” are fragmented, and struggling to recapture their ancient glory. There’s plenty of new land revealed by retreating ice, and a lot of ancient enmity – perfect for never-ending war.

Unlike some wargames, I wanted Mantica to have a story that could move forward. I didn’t want a “one minute to midnight” feel that renders the actions of our heroes somewhat hopeless, so I put the great wars in the past. In some ways, Mantica is a post-apocalyptic world. Now is a period of retrenchment, but the threat of dark gods returning hangs over all. There are dangerous ruins everywhere, while deadly artefacts and monsters created in the God Wars can be found across the world. The inhabitants of Mantica might pray for a bright future, but it could all go horribly wrong…

I also tried to move away a little from the standards of each racial stereotype: Our dwarfs are powerful and resurgent, mankind’s glory days are in the past, the elves are crippled by internal tensions. The elves in particular are interesting, as it’s been their arrogance and meddling with magic that have unleashed two of the world’s greatest evils. These aren’t huge divergences from the accepted fantasy norm – they fit the archetype – but cumulatively they make the world our own. Hopefully, this keeps us out of the realm of cliché. 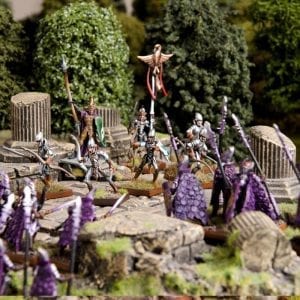 A bit of Tolkien, a bit of Beastmaster

For the tone of Mantica, I drew upon two specific influences. I went back to Tolkien for the grand sweep of history: the rising and falling of nations, the reforming of the world, doomed love, the conflict with the divine… We’re talking The Silmarillion here rather than The Lord of the Rings. But the detail of it, at the day-to-day level, comes purely from Sword and Sorcery. Sword and Sorcery pretty much was the be all and end all of fantasy before Tolkien came along, and it’s a sub genre I love – Conan, Fafhrd and the Gray Mouser, The Eternal Champion… These stories are about the actions of individuals, good and bad, rather than the relentless push of fate. They’re full of horrible creatures, dark magics, and mad wizards, desperate struggles in dark places against terrible foes. Sword and Sorcery is darker than Heroic Fantasy for sure, but there’s a grain of hope in it, and an ownership of one’s actions. Tolkien’s Middle-earth, for example, is a creation in a state of perpetual degeneration. Other heroes find themselves just pawns of destiny. Mantica needn’t be like that.

What Mantica looks like in the future is very much up to you, as the world is now established, so it’s entering its secondary phase, a time when there’s still tons of stuff to be defined, and great sagas to be written. By choosing this mix of deep history and individual action I’ve tried to put the fate of a world in your hands. Have fun deciding it.

Guy’s done a great job writing the world of Mantica, detailing a rich history and delving into the world’s geography. (Sadly, he neglected home economics, P.E. and arithmetic. Sorry, couldn’t resist!) As he said above, he’s painted on a broad canvas and left large swathes of the world open to interpretation, a canny move for a fledgling game like Kings of War. There’s more than enough room for expansion, for mighty battles to be fought, and for gamers to add their own tales of adventure. All of this is helped along by the full-colour map of Mantica (by the awesome Pete Borlace) that occupies a double-page spread in the rulebook. 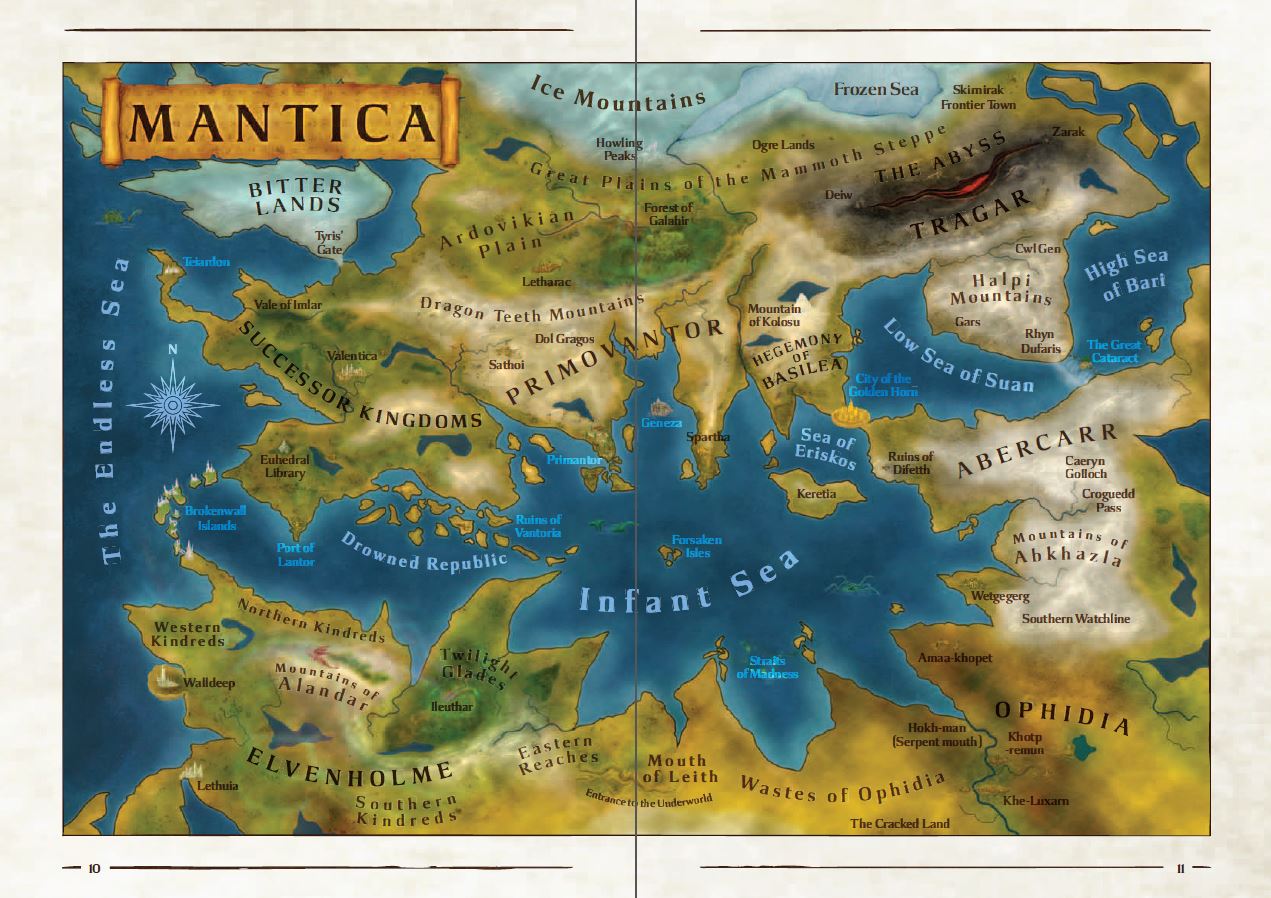 All in all, the hardback rulebook’s background section is a great way to get inspired when putting together a Kings of War army. I’ve had great fun reading about the twisted realm of Ophidia, and it’s given me a few ideas about the Undead army I’m working on. (Demonologists, you say? That would definitely make my force stand out…) I’ve the Kings of War background has influenced your own armies, why not let me know about it in the comments section below, or post some pictures on our Facebook wall?

Make sure you check back later today when we’ll be talking about another section of the hardback in detail. See you then!