It’s been great fun putting together this week’s Kings of War content for the blog, and one of the things I’ve enjoyed most is talking to some of the people behind the scenes of our favourite fantasy game. In my quest to find interesting things for you guys to take a look at, I got in touch with Heath Foley, concept artist and new(ish!) addition to the gang of freelancers who are responsible for creating our miniatures range.

Heath’s done a crazy amount of work for us considering we sent him his first brief less than a year ago, and he was kind enough to give us some insights into what he does. Take it away, Heath!

To start things off, I’ll give you some insight into my process. It all starts out with a brief; this is just a generalized description of the characters physical appearance, with some flavor text added in for inspiration that Mantic sends me. From there it’s my job to visualize that character or creature into a design. Typically, I get a flash in my head after reading the description, and I do my best to transcribe that image onto paper. The challenge lies in creating something dynamic and new but which still feels familiar and fits the aesthetic of the world. Mantic is excellent at giving us the freedom to explore ideas (and make mistakes from time to time!), and it fosters a huge amount of creativity. 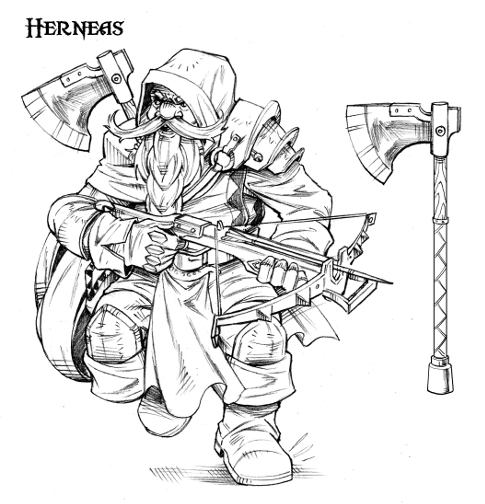 Heath’s concept for Herneas the Hunter, a new character from Kings and Legends.

I’m fairly green in this industry, only recently having achieved my first year of creating concept art full-time. In that time I’ve been lucky enough to work with six different companies on over a dozen titles, the biggest company being Mantic Games. I actually met the guys from Mantic during GenCon, while I was helping out On The Lamb Games, another company I was creating art for. Mantic was pushing Kings of War, and as soon as I saw it I loved the look and feel of it. (I’ve been drawing characters in armor, or monsters of some sort, ever since I was a kid. It definitely got me sent to the principal a few times – apparently drawing creatures holding weaponry was frowned upon!) After talking to Ronnie and the team for a while, I casually shoehorned my business card into the conversation, hoping to expand my portfolio. It wasn’t long before they came back with some work for their DreadBall Kickstarter campaign.

I’m sure you know how successful the DreadBall campaign was, and my job was primarily to be an emergency artist. That is, I had to produce art at an insanely fast rate to catch up to rapidly approaching stretch goals! I returned to this role during the Deadzone campaign as well, although I was also used more heavily in the pre-production of that game. Before that though, they put me on Kings of War, which is right where I wanted to be.

Kings of War has been one of those projects that you get excited about way before pencil even touches paper. Being a fantasy nerd my whole life, this was a dream job. I started off creating a few designs for high-level Kickstarter backers. (People who pledged at a certain level were given the opportunity to have a miniature sculpted in their image – several of these have ended up as heroes in the Kings and Legends supplement! –James) It was a real challenge getting the mini to look like them while adding armor, magical powers and other fantasy elements. It was a good starting place, and the guys at Mantic seemed happy with the results because they soon gave me something even more challenging: creating core units for the Basileans, their first human army for KoW.

It’s easy to assume that basic troops would be less work that heroes, but the opposite is actually true. A hero is a one shot piece with one pose; they are unique and fun to draw, but they’re not what makes up the bulk of the army. The basic troops require variety, different posing, alternate armor and multiple heads, none of which you have to think about with a hero. Mantic started me on the Basilean Sisterhood, which really was my first foray into a proper character sheet. Character sheets are used primarily for sculptors so that they have a design to work from, and generally include some alternate views, detailed shots of certain elements, and alternate weaponry and armor. The reason they have all of this is so the sculptor can create multiple variations of the same model type; no one wants to have an entire unit made up of exactly the same model! 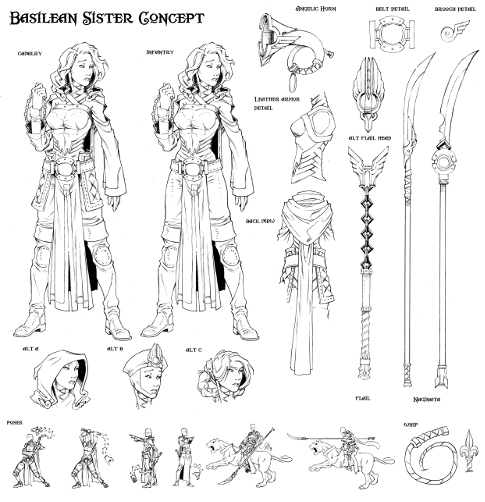 As you can see, Heath gave us plenty to work with!

The Sisters were my first chance to really dive into my own process for KoW, and I loved it. In my mind, they needed to be battle-hardened nuns, so you can’t just put them in skimpy armor with a giant weapon – they would be killed in an instant! I made them look light and quick but still deadly in their own right. Luckily for me, Mantic loved the design and gave me the Men-at-Arms and the mighty Paladins to design as well. I love drawing things in heavy armor so the Paladins were right up my alley! I put everything I had into it; I think we ended up with over two dozen helmet designs by the end. I soon completed these two briefs, but the requests just kept coming. Next I worked on the upcoming cavalry units for the Elves and the Twilight Kin, as well as a few heroes and monsters for the Kings and Legends supplement. At the moment I’m coloring a few pieces for promotional work and interior art, but primarily they’ve got me designing characters. 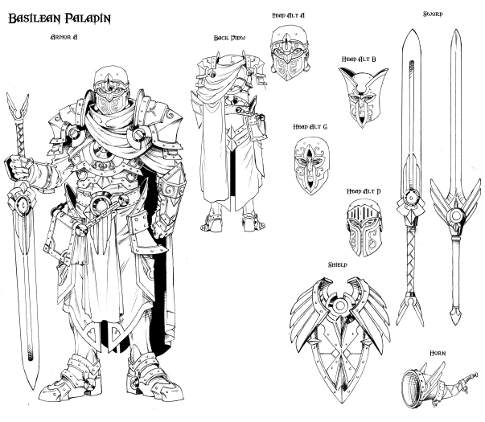 As a concept artist, I have a very simple philosophy. I design characters that I would want to play. This doesn’t mean that every single unit needs to be the most amazing thing ever, but every piece is an opportunity to do something unique and fun. Its one of the reasons I like working with Mantic so much – they give me plenty of room to experiment and have fun with designs. They also challenge me to create higher quality designs with every new piece, which causes the minis to be that much better. I’m very excited to see where they take these games in the future, and consider it a privilege to be along for the ride.

If you’re interested in seeing more of my work, including the designs I’ve created for Mantic and many other projects, feel free to visit my site at: http://artofhf.wordpress.com/

Thanks Heath! I’ll be adding more of his concept art to Facebook today, so head over there to check it out. Stay tuned to the blog for more Kings of War all this week!