Kings of War Week 2013: The Rules, They've Been A-Changing

Hello again! If you didn’t catch the first part of today’s Kings of War Week 2013 article, it’s worth checking out before you read this one.

So where were we? Oh, yes. We’d just bagged the legendary Alessio Cavatore to write us a wargame! The next part’s best told by the man himself – and conveniently enough, Alessio did an interview for Behind the Rules back in November 2010 in which he gave all sorts of interesting insights into the design process. Let’s have a look, shall we? 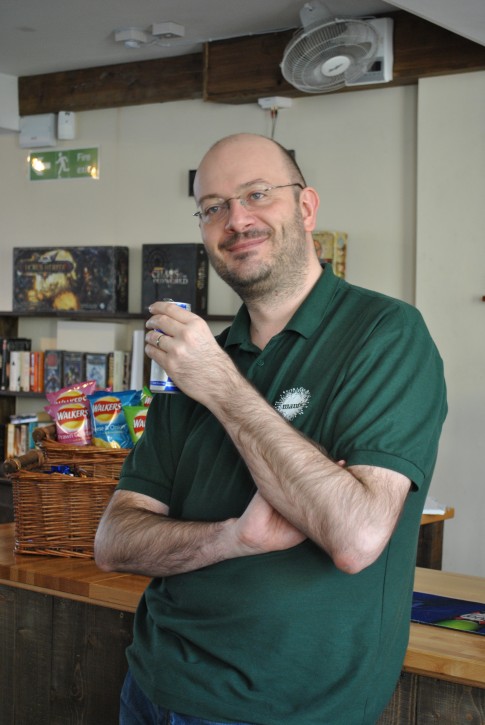 The man himself, seen here with a can of Writer Fuel.

You’ve just finished Kings of War, a new game for Mantic Games. What brief did you write to, or set yourself?

The first step was to look at the Kings of War model range. It’s vital that the rules service the models. That’s one of the first things we say when River Horse [Alessio’s company] helps you with your game system is: do you have an existing range? It seems to surprise people when you start like that – they just expect you to write a set of rules, rather than rules that are designed for their models. The other key aspect was the packaging, the way they sell their models – they sell them in tens, twenties and forties. A ten is called a Troop, twenty is called a Regiment and forty is a Horde. So the next question was: do you want a model-based game or a unit-based game? In other words, should the smallest element in the game be the individual models, who can be removed and killed, or should the unit as a whole have a stat line?

And what was the decision?

Because of the way the models are sold, I recommended unit-based. I’m also doing some work for Warlord Games on their coming expansions for Black Powder, which is unit-based, and it’s a method I really like. So what came out was a game that has elements of Black Powder, has elements of Warhammer, has elements of other games. In fact I had never written a new system completely from scratch, and I started thinking as I wrote: oh, this rule is a bit like that rule in that other system – maybe I shouldn’t use it. I was killing myself trying to write original mechanics that had never been used anywhere, and it got me nowhere. In the end I realised that with so many people dealing with the same problems, you’re going to end up with some similar solutions. So I decided not to worry about it, and just write rules that seemed to work well. Bizarrely, when I stopped worrying about it, I came out with quite a few original mechanics, that, mixed with some solidly established principles, that I’ve taken from other games I love, make for an interesting blend of newfangled and familiar, I think. But of course I’d say so!

So how does it differ from Warhammer? How do they compare?

When a Kings of War game starts, with the units deployed, it does inevitably look a lot like a Warhammer battle. However, once the game is underway it actually has very little to do with Warhammer. The biggest difference is: each unit has a profile – there is no removing of models as casualties – instead you put down markers to indicate damage, psychological as well as physical. And when enough damage has been done the unit breaks and is removed – there are no fleeing units. All of this means the game is much shorter than the equivalent Warhammer game.

How does the turn system work?

The system is: I move, I shoot, I attack your models in combat, then you do the same. It’s written so that I do everything in my turn, you do everything in yours, So in this game, if I do enough damage, I get to roll against your bravery or courage – I called it Nerve – and hopefully break your unit. The interesting thing about this is that, if you want, you can decide to play the entire game with a chess clock or a timer. So in a tournament, or if you just like to experience the pressure of ‘real battle’, you can add in this time factor. Obviously you couldn’t do that in Warhammer because you do stuff in my turn. If you’re playing with a timer, you agree a time limit, say one or two hours, and when your time runs out your entire army breaks and runs – losing the game.

That’s quite novel for a full wargame.

I thought intellectually it would be an interesting thing to have, but there’s a big difference between writing a rule and playing it, and when I tried it out, it was very revealing. I’ve written a new system, it’s simple, it works, but it still feels like playing a tabletop wargame – Warhammer, Flames of War, whatever – the rules are different but it’s the same fundamental experience, one that I’m very familiar with. However, the moment we started using the chess clock, it was a different, new experience – you do different things, you feel different things. Almost like the difference between playing a turn-based computer game and a real time strategy game – there’s an element of genuine panic!

And you’ve kept the system short and sweet?

Yes. It’s very simple. The entire Kings of War rules are just 12 pages long, including all the special rules, the scenario, rules for alliances, timed games. I’ve been asked a few times when we’re bringing out the full version – people assume this is just the quick play summary sheet! But no, this is the entire game. We also made it quite humorous, particularly in the special rules with things like the Elven Sabretoothed Pussycat and the Dwarf Throwing Mastiff.

Is there anything to stop me using my Warhammer models to try Kings of War?

Not at all. Mantic’s models are considerably cheaper than GW’s, so a lot of people buy them to bulk out their Warhammer armies. If gamers go the other way and use their Warhammer models to try out Kings of War, then I’ll be very chuffed. I’m told that fans on the forum have already started creating their own army lists for races that Mantic don’t yet produce – I hear there’s one for ‘Lizard-kin’ for example.

And how is the game being sold by Mantic?

They don’t sell it. It’s a free game that will be put inside boxed sets from Regiment size upwards and later on will be posted up as a free download. Then we will publish updates every year or so, to keep the rules polished and fresh.

Looking at Alessio’s answers, it’s interesting to see what’s changed and what’s stayed the same. We’ve always stuck to the idea that our rules should be available for free, but we’ve now also released the hardback rulebook in response to gamers wanting something meatier with advanced rules and background. This means that both options are available; we never want our customers to feel that they have to choose between buying awesome models for their armies and spending their hard-earned cash on a load of printed material just so they can play a game!

In the period following Alessio’s interview, Kings of War went through a long “beta test” phase. Mantic has welcomed comments and feedback from the gaming community, knowing that the hundreds or thousands of games that are played around the world on a weekly basis will soon turn up any loopholes or grey areas in even the most thoroughly-tested rules. Kings of War underwent several changes over this period – for instance, the Nerve system used to be a lot more complex, and even involved looking things up on a chart, something that almost sounds crazy when you know how streamlined the current rules are! Alessio’s spent a lot of time over the years reading through forums and emails, sorting the sensible suggestions from the crazy ones, and to see the product of his hard work all you need to do is get involved in a game of Kings of War. 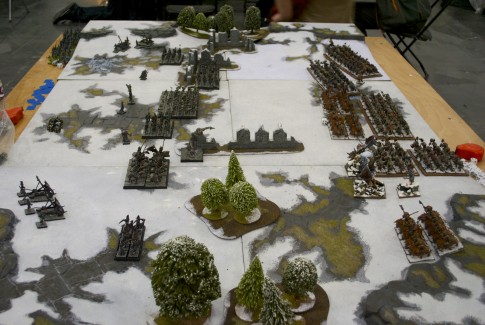 Alternatively, come along to one of the many events and shows we attend and see a game in action – this one was at Salute 2013, and saw a massive Orc horde taking on an Undead legion. For a game this big, it was over in no time!

So if you want to start playing Kings of War, where’s the best place to start?

If you’ve already got a fantasy gaming army (from Games Workshop or anywhere else), you can head over to the Gaming section of our website and download the rules entirely free. You’ll find the 32-page rulebook as a PDF file, which includes starter force lists for four armies (Dwarves, Elves, Orcs and Undead). From the same page, you can also download the full force lists for each of our nine current armies, including the Ogre Force List which has been added today! These lists give you the rules for each unit in your army, plus their points costs and options that will come into play when you start picking your gaming force. 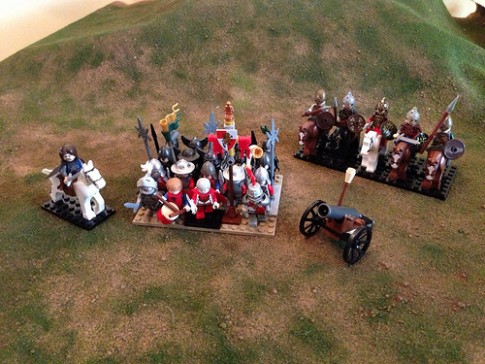 If you haven’t got any models yet, you could always get creative like Forum user Doctor_ocks. Click the image for more pictures – it’s an inspired approach!

If you don’t have any models yet, we’ve got some good news for you – we just happen to have a few that you can use! I’ve already waxed lyrical about how great our Battle Sets are, and each one – whether one player or two player – comes with a printed copy of the 32 page rulebook. The same rulebook is also included in all of our army deals. The way we see it, if you pick up an army you might as well have a copy of the rules! One of the things we hear from a lot of our players it that they like having multiple small rulebooks; they like being able to keep one in each of their figure cases, so that each of their armies has a copy of the rules present at all times. (As a long time wargamer, I know how annoying it can be when you turn up to play a game but you’ve left your rulebook at home, so I can definitely see where they’re coming from.) Of course, if you want to go the whole hog and really get started, you can pick up a copy of the Kings of War Rulebook, which is so good it deserves its own post. Check back tomorrow where I’ll be going over it in more detail!

That rounds off our first day of Kings of War Week coverage. I hope it’s been fun and informative! If you’re just getting into the game, tell us about your experiences so far in the comments below. Also, feel free to ask us any questions – we’ll do our best to answer them!