After yesterday’s slight break in Khaos Dwarf Week (we’ve had to give the paintbrushes a break, they’re furiously overheating), we’ve still got a lot of Khaos Dwarf stuff to show off. What this means is that we’re having a ROLLOVER and there is still more Khaos Dwarf madness to come next week, along with a few other bits and pieces we’re sure you are chomping at the bit to find out about.

Those of you who have downloaded our Khaos Dwarf Beta Army list will have noticed the Thunder Rippers – Khaos Dwarfs armed with Blunderbusses. Well, it seems this unit has been causing a bit of controversy – much like our Khaos Dwarf Lord!

Firstly, the name – Thunder Rippers. After a bit of thought we felt that this name could be better – and who better to name this powerful unit than you guys! So, with the fine fellows at Dakka Dakka, we’ve been running a naming competition. We’ve had names ranging from Thunderwatch to Evil Midget Blasterers (a by-stander in the street even suggested calling them Derrick), but if you think you can do better, there’s a fantastic prize to be had.

Of course, if you guys fancy a little bit on inspiration, check out the paintjob the guys from Golem have whipped up for the soon-to-be-renamed Thunder Rippers. I can still see the plumes of smoke as their brushes cool off! 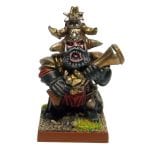 This competition is closing on Tuesday 25th January, as is the Heresy Competition, so if you want to get your entry in, now is the time to do it! Check out the competition page for details.

What we’ve also noticed is the fantasticly varied feedback we’ve been having on these guys having a breath attack instead of a normal attack in Kings of War. This is the kind of feedback we like so if you want to have your say, we’re still taking feedback until the 25th January so please post your feedback in our Beasts of War discussion group!

The Thunder Rippers are currently available to pre-order in our Khaos Dwarf Army Deals including Gorgoth’s Colossal Legion of Terror which, with Free Rules, Free Shipping and over 90 plastic and metal miniatures, is a one-time offer as these large deals never stay the same for long (just read our announcement here for proof of that!).

Make sure you guys keep checking back to the blog all next week and, as ever, drop us your comment below and let us know what you think of the paintjob!