Loka – why you should give it a try 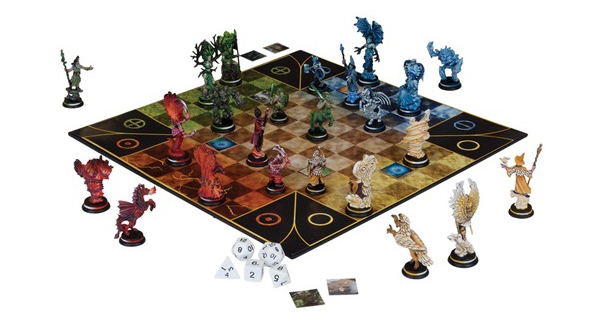 I’m a bit of a chess fiend.  I also like games I can break out and play with the eldest, who is 14.  And Loka fits that bill.
So, in the first of what’s probably going to be another series of posts, I thought I’d introduce you to the games that I’m playing and talk about why you should maybe consider giving it a try.  So, when I was up in the office on the first week of actually working for Mantic, and the interview before, Chris was talking to me about Loka, an elemental board game a bit like chess. Produced with River Horse Games, and designed by Alessio Cavatore, it was our third Kickstarter, and is, in my opinion, a gorgeous game that I’m glad I was told about. It’s available from the Mantic website, here.

Now, before I go further into this, Loka isn’t just chess.  It’s chess-like, but there’s scenery to interact with (though, the first game we played and photographed, we didn’t use it, just to get the hang of the rest of the game) and dice.  And different tactics.  Well sort of.  Some chess tactics do translate really quite well to the game, others…not so much.
The thing that delighted both myself and both of my competitors was working out HOW to get into a position to use a D20 attack, which I’ll explain later.  I was also really pleased that it was easy to get into and easy to play.
Before I talk about the gameplay though, I wanted to focus a bit on the pieces, which are quite honestly gorgeous.  I’ve already convinced myself I need one of each so that I can paint them and use them as our bespoke house chess set (replacing our antique Chinese one).  There are four elements, in red (fire), blue (water), green (earth), and yellow (air).  Green and Yellow team up to make up the ‘good’ team, while red and blue are the ‘evil’ team.  If you’re playing two players, it means one gets red and blue, the other green and yellow. I haven’t played as a four player team yet, but I do like that tactically, you have to have had a chat before playing, because you’re not allowed to communicate at all during the game.  And of course, you battle with dice.

Setup and other pre-game considerations 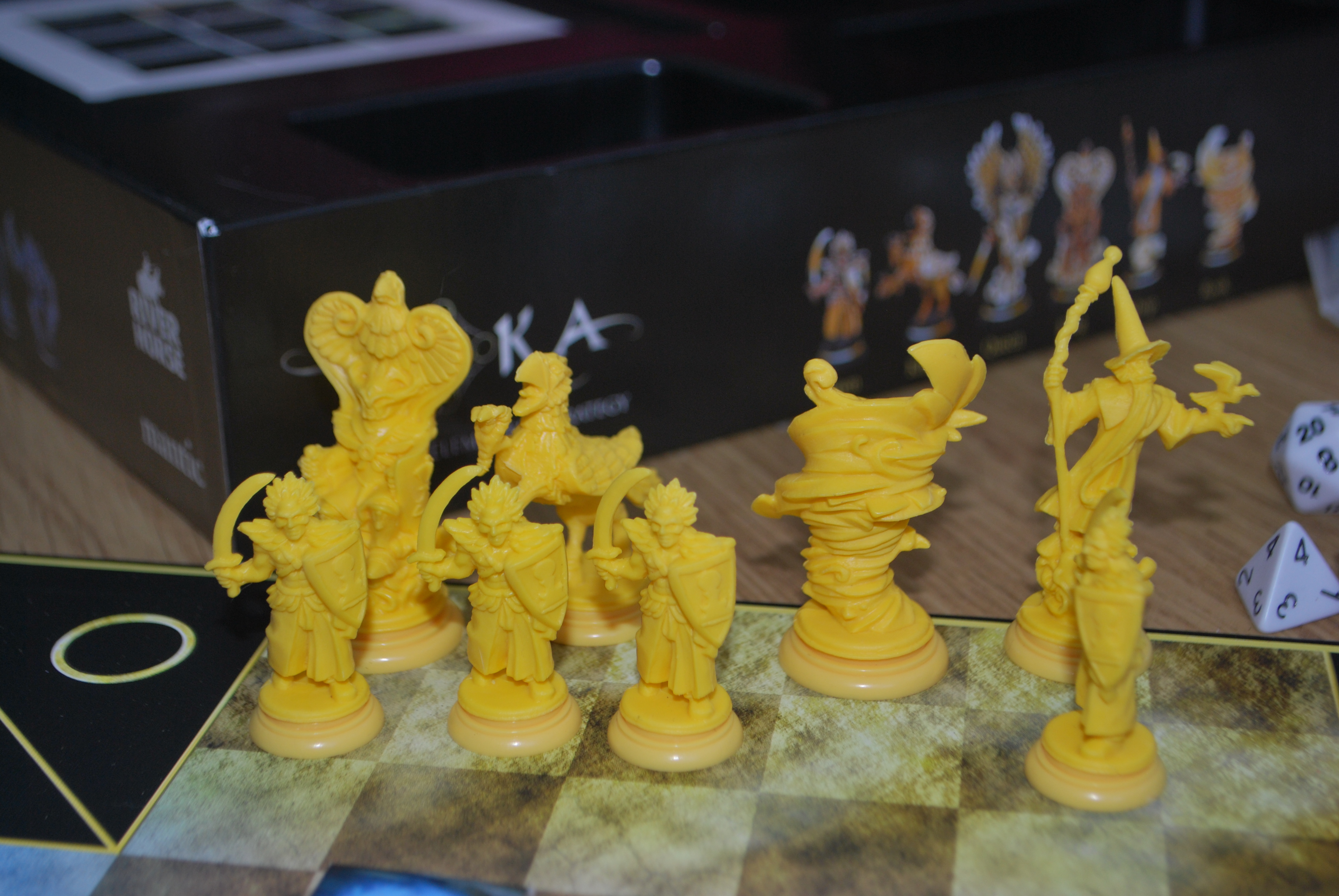 Loka doesn’t take up much space.  It doesn’t require a lot of forethought, and if you know how to play chess, you’ve got
most of the tactical considerations already in your head.  There are some advanced chess moves that aren’t allowed (en-passant etc.) but other than that, it’s an easy game to get the hang of.  The scenery adds a dimension to it that I didn’t expect, but to be honest, once we got the hang of it, we were playing away within about 30 minutes of opening the box, including debate over who got which set of colours.  There is no construction required with the pieces and they’re quite stocky, sturdy, well-detailed pieces.  There’s no cleaning required on these pieces at all – they’re pristine and very nice pieces, with even colour.

Armies are built based on points, and the box itself contains 1000 points total (250 points per team).  You can buy any pieces you have access to, though you do need an expansion in your colour to customise your army beyond the basic ‘Army list’ provided in the box.  We were playing with the 250 point armies from the outset, which is a King (free), Queen, Bishop, Knight, Rook and four pawns. 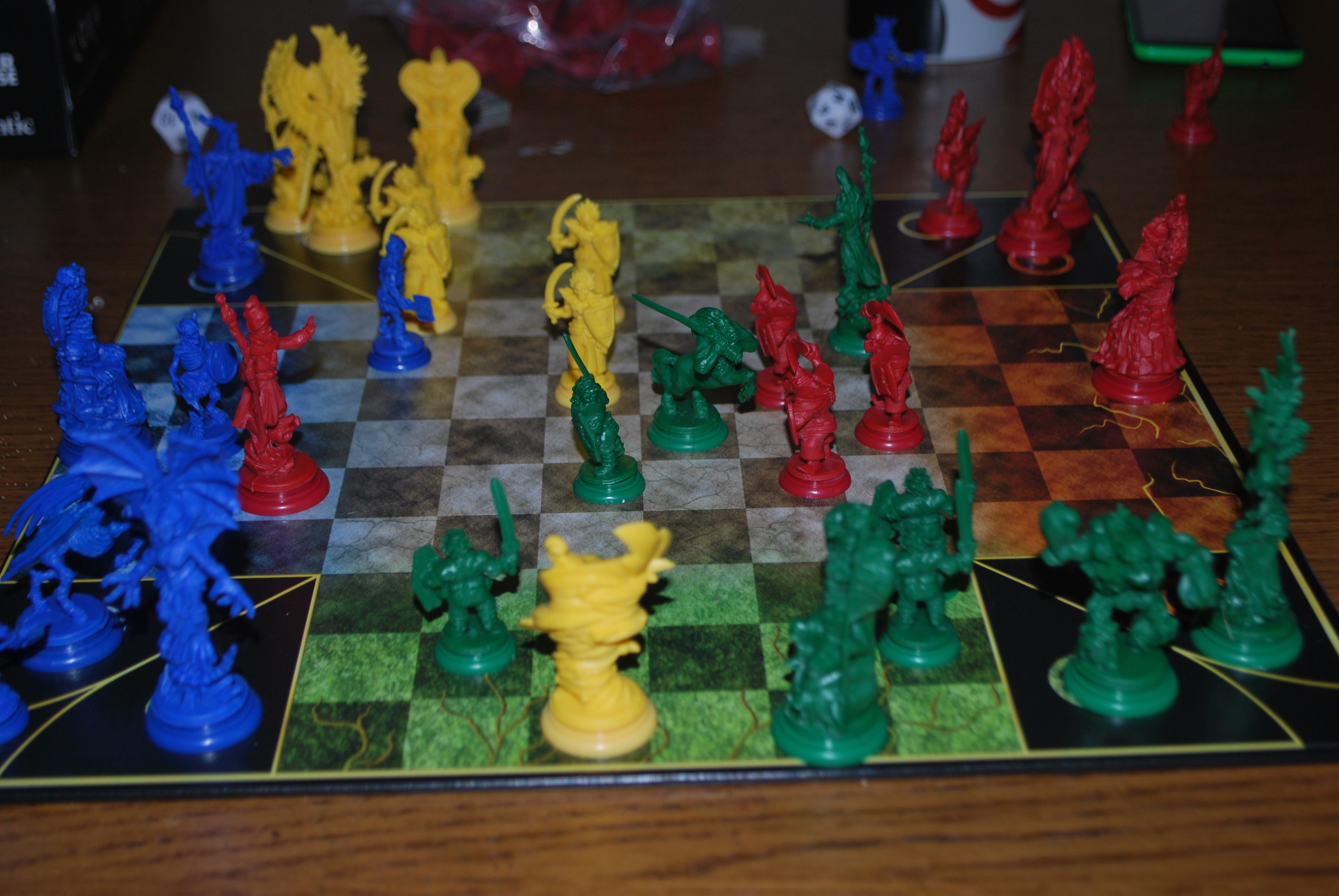 It’s actually quite a fast game once you get into it – and the moves just flew by, though we did both get into a ‘D6’/D4’ battle when each of us tried to push against the other single piece to take them out, which did get a little bit repetitive – but I think that says as much about our tactics as it does the game.  There are very few ways to set up battles that are five ‘boosts’ (giving you the D20) given a ‘boost’ is effectively a piece able to take another piece from either of your teams, but it can be done, because unlike chess, there’s no harm in waiting to take a piece.  In other words, you have to fight the instinct (in my case at least) to dive in and take a piece, if you want to set up better ‘takes’.
There was also a lot of mutual annihilation hilarity (where both players roll a 1) in the first game, but actually, I came to dread it playing my partner later that night.
The mechanics are still familiar enough to chess players that it’s not jarring, and those that don’t play chess are effectively going to be taught the basics of chess at the same time, making it, in my opinion, a suitable game for teens.
Both our games lasted an average of 35 minutes, though I’m pretty sure they could have lasted longer if we were giving each move  a bit more consideration.  All of the games ended quite predictably – one side lost all of their pieces and made a run on one or other of the kings and inevitably lost.  One game was won taking the King in both move three and then ‘mutual annihilation’, the other came down to an epic straight D20 dice-off against two Kings.  The only predictable thing that I’ve seen so far is that scenery makes the game harder and more interesting.

I have a huge bugbear with games that are difficult to pack.  I mean, you break the seal on some board games and it’s almost as if it were vacuum packed and you can never *ever* put everything away in the same box. It drives me absolutely demented too, to have to find boxes and bags after unsealing stuff (I’m not a neat freak, I just like my games to be as ‘out of the box, ready to play as I can get, so I’m not spending two hours doing setup.
Loka’s actually the opposite.  There’s plenty of room for the pieces (no accidental squash breakages either), the board is neat and sturdy, and everything packs away nicely.  It just goes to show the care and attention that went into the game itself.  If you extend the game though, you will have to find alternate storage.

There are enough pieces to play a straight chess game using two coloured sets.  Just take out one King, one Queen from each side and build your set that way.  The two colour variant isn’t confusing at all, you just keep track of what ‘your side’ was, or stick with the ‘good/evil’ split.  The back of the board is both a chess board and a way to bring multiple copies of the game together to allow for epic battles.  Or you can choose your favourite colours, grab an expansion, and create a chess set of well-sculpted minis with ease.

Loka is an excellent game that I’m really looking forward to practising so that I can play at tournament level, but if you’re a bit of a chess fiend like me, or like chess at all, consider joining the tournament at the Open Day.  It’ll be well worth your while.  And if nothing else, you can come and meet the gentleman who designed it, Alessio Cavatore and ask him about it, and the Tarot, which has since released, that is based on it!  You can see it in action at the Open Day.

*edit.  I (Kai) misunderstood a rule, and originally the D6/D4 fight was referred to as a D4/D4 fight.  What actually happens is that the attacker automatically gets one boost from the ‘charge’.