Looking back, and looking forward again…

Firstly I would like to thank everyone who has either picked up one of products for the first time, or has been with us through thick and thin for the last five years. (Yes, it is already five years!) We are still a very small company trying to find our path in an industry dominated by a few colossi. Your support and help, honesty and feedback helps us enormously and we look forward to making games and organising gaming events with and for you for many years to come. Thank you for believing in us and helping make this happen.

I think it is fair to say that 2013 was defined by the Kickstarters –  both the new ones, and those we ran in the past. The new ones included two that helped bring other people’s products or IP to the gaming table – namely LOKA and Mars Attacks – and a huge step forward in the development of the Warpath universe with Deadzone. However, the year also saw the releases of some great products that came as the result of Kickstarter campaigns in 2012, such as the Kings of War releases and the huge amount of support for DreadBall. 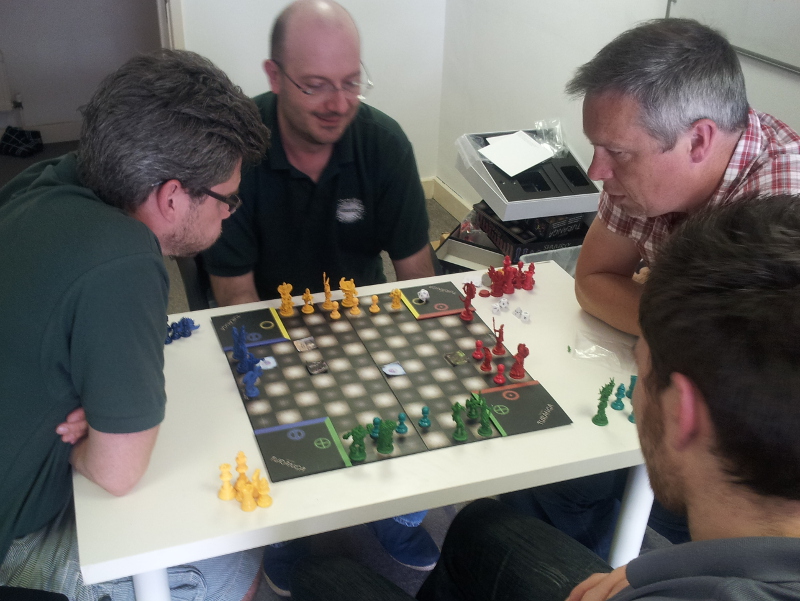 Is Ronnie focusing on learning the rules, or trying to blow Alessio’s King over?

I think it was great that last year LOKA got funded. It has always been a dream of Alessio’s; he worked hard in the background for many years to develop the game and have all the sculpting done, but the reality was that the tooling was too prohibitively expensive to ever bring it to market. However, the support he received from the Kickstarter community allowed it to be made, and sure enough and it hit the shelves in November! We always knew it was not going to be the biggest campaign ever, but it is very rewarding for the backers and the designer when a dream becomes a reality.

I am going to save talking about Mars Attacks for a separate blog post. I will just say that I think it looks fantastic, and it will be a great game to introduce new gamers into the wonderful hobby of toy soldiers. It felt exactly the right place to produce one-piece coloured models – easy to game with, but without compromising the quality that gamers demand. The game will launch in late summer and I think it is going to a really fun, light-hearted adventure. The game is playing well and I am sure it will be going out to beta very soon – so watch this space for some Martian-led mayhem.

It was really interesting to see the step up in interest and sales that we saw at the end of the summer on the back of three months of Kings of War releases – including the Trolls, Werewolves, and both a human and an ogre army! It really feels like the effort that went into developing all those new releases – and the two expansion books – has kept the game in everyone’s minds.  Taking up a new wargame like Kings of War (i.e. one with lots of figures, instead of a skirmish game with just a few figures per side) really does take a pretty big commitment, so to create a meaningful worldwide player group we have to keep building the fan base with great new releases and developments for the world of Mantica, as well as events and organised play support. As Mantic becomes more well-known and gamers try our other games, it seems they become more willing to try a new wargame – at which point the joy and simplicity of KoW really catches their attention. I think this year we will need to come back to you with our thoughts about how we can keep developing this system – either directly with new armies for Kings of War or a stand-alone game in that setting that allows us to look and understand the world in a deeper way (in the same way that DreadBall and Deadzone have expanded the Warpath universe). Let me have your thoughts in the comments below! 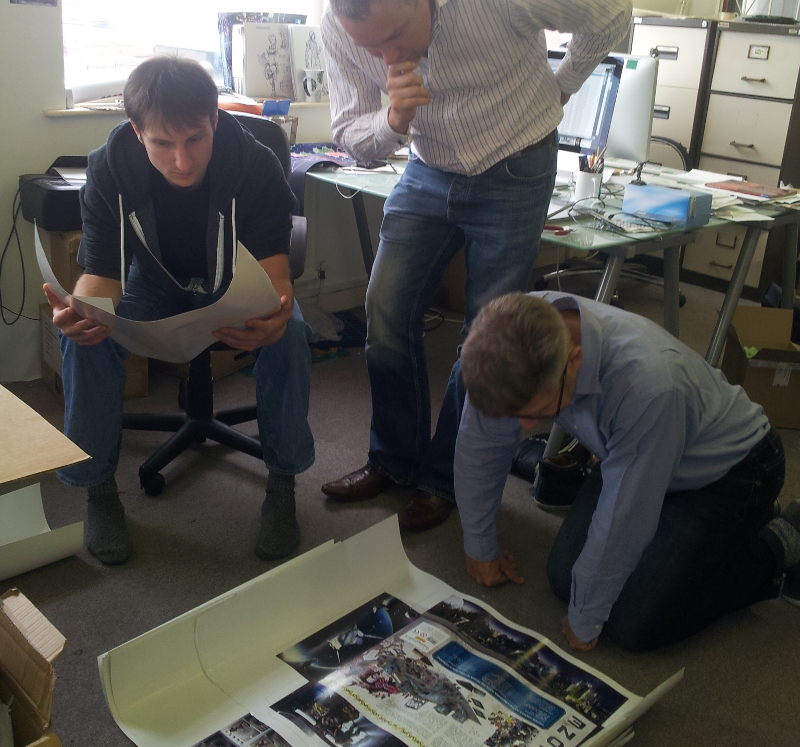 Curis, Mark and Ronnie cast an eye over the Deadzone box before it goes to print.

Speaking of Deadzone – what a six months that was! For a few weeks before the Kickstarter, as we had been gaming and testing, everyone in the team had been getting warm and tingling sensations (I’ll not mention where!). The same was true with each new sculpt and building tile we saw. We had built a really exciting back story on the world of Nexus Psi, and we felt we were developing the basis of a very solid game. From the second the project went live we knew something special was going on. Clearly people were really getting excited about this system – and that excitement didn’t stop until we topped $1.2m some four weeks later. We had six factions and six terrain Battlezones to sculpt and tool, many books and expansions to write (plus zombies!) and then 4500 pledges to ship – many of which we later found out were absolutely HUGE! After the excitement died down, the hard work really began. We were very proud when this huge, epic and mammoth task shipped in early December, and everyone in the team pulled out every drop of effort they had to get those house-sized boxes out to you. I really hope you had a chance to get your hands on a copy of the game – either via the Kickstarter or the special pre-release edition that was avaialble through the website and retail stores. It is a fascinating game with real depth and challenge that deepens as you learn more and your faction develops. 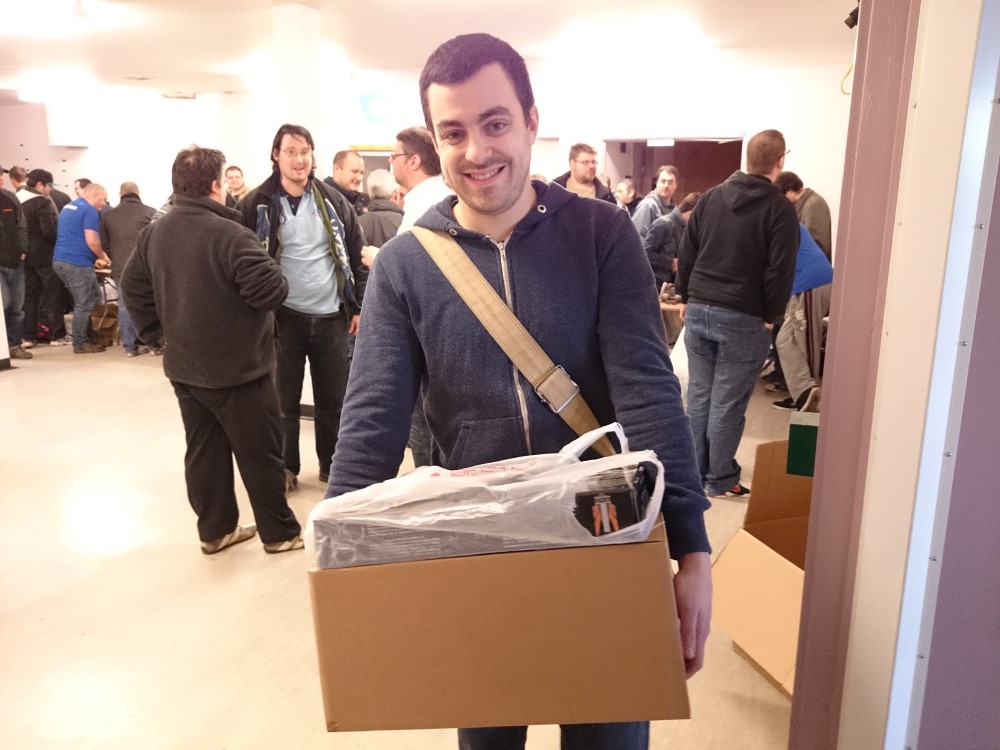 That’s a decent sized box – but it’s not the biggest we saw!

Next month we have the proper game launch, with boosters for each of the first four factions. We follow that up with the separate release of all the scenery, which will work well for Deadzone but also for many other great sci-fi gaming systems out there, from skirmish to mass combat. Then we will see the Asterians make their debut, alongside the rather more uncouth Forge Father Brokkrs! Deadzone gives us a skirmish system and an easy introduction to the Warpath universe, but I would still like to see a mass combat wargame. Before we undertake that, I think we have to be more confident in the quality of the hard-plastic sprues we produce. We are very close to seeing the finished sci-fi zombie sprue, and we think that will give us an insight into whether we can look at undertaking the full development of the Warpath mass combat game later in 2014. I certainly hope so; I think it is time. Watch this space…

OK, so what’s around the corner for DreadBall? After all, 2013 was the year that the game really took off. We took it around the shows, lots of clubs took it up, and then organised play and tournaments started popping up all over the place. We saw Season 2, with Judwan, female Corporation, Zz’or and Robots entering the arena for the first time. Later in the year Season 3 and Ultimate came about, bringing Giants, multiplayer games and another four teams – the Zees, the Teratons, the Asterians and the Nameless! 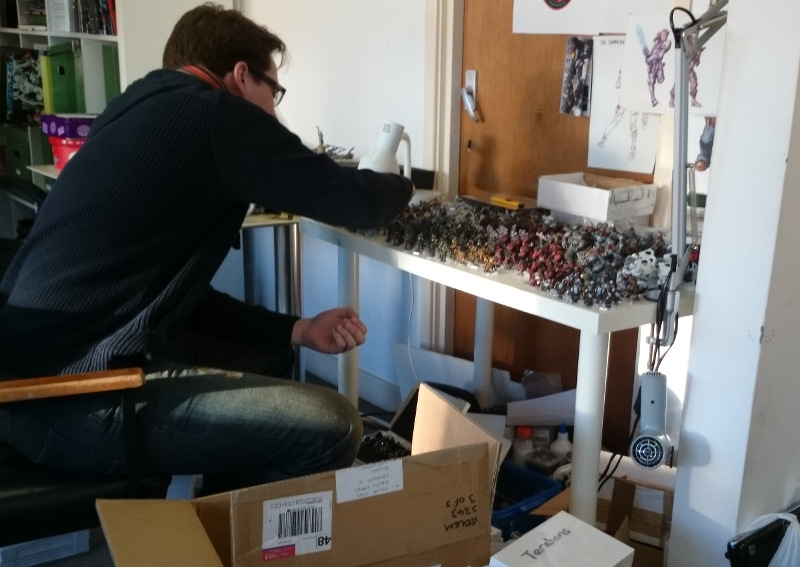 This month will see the first DreadBall product that wasn’t funded through Kickstarter – the Azure Forest league pack. This is the first in our Galactic Tour Series, and contains the official 2014 tournament pack, as well as new rules, cards and MVPs – one of which is only tournament-legal in 2014! It is a fun and engaging product, and will be released alongside the final Season 3 team booster sets. [We’ll be revealing everything you want to know on the blog tomorrow, so make sure you come back and check it all out! – James]

However, our appetite is a bit bigger than that! We thirst for more – more teams, more ways of playing, more ways to pick and individualise our own rosters – and for getting out from under the bright lights of the the DreadBall arenas. We want to play in the darkest corners of the Corporation, where anything goes and money talks! We want to take DreadBall to a deeper and nastier place. We hinted at it with the very last stretch goal of the first campaign – Blaine – and gave it a page in the Season 3 rulebook. Yes, we want to play DreadBall Xtreme! We hope you’re as excited about the idea as we are, and we can proudly announce that it will be coming to a Kickstarter near you at the end of February or the beginning of March! Let the violence begin…