Mantic is going on the Warpath!

At last, the wait is over.

It’s been a while since we last talked about Warpath, but we haven’t been idle. Warpath, Mantic’s mass-battle sci-fi wargame, has been the end goal of all the developments in our futuristic universe for the past few years, and all of that work is now coming to fruition. DreadBall and Deadzone have done a sterling job of introducing new characters, races and technology, and the personalities, cultures, politics and skills that bring them to life. More recently, our forays into new hard plastic tooling have given us the confidence and resources that we need to realise a 30mm scale mass-battle game on the tabletop.

Now, the time has come to get some real community input into what we’re doing. The rules have been released as an alpha test edition over on Beasts of War to Backstage Pass holders, and will go on general release very soon – with some extra additions.

This is your chance to play some games, have your say, and have some fun! We’re really eager to know what people think, and we’ll be collecting feedback here.

Our fans have been invaluable in improving Kings of War recently, and we want to do the same with Warpath to make this the best game it can be.

Warpath is not just Deadzone with more models. It aims to capture a different style of gameplay, a step removed from the individual models on the battlefield. It takes more of an abstract strategic view, with a strong focus on positioning, suppression, and capturing terrain and objectives. Warpath intends to capture a more contemporary (and hopefully futuristic) style of play – we want to avoid making it Fantasy in Space. Therefore there is a focus on shooting – when units reach melee it tends to be brutal and over very quickly.

The mechanics are relatively simple as with most Mantic games, but they aim to present a wealth of tactical choice, and the game will be won and lost on the decisions made by the players. When to push ahead; when to hold back; when to sacrifice a unit for a better position; when and where to spend your valuable resources for maximum effect? It will take players a while to master the nuances of the rules, and this is a game where those options can only truly be seen on the tabletop – they will not be immediately obvious from a read-through.

Beyond the core mechanics, we want to create a range of armies with a focus on combined arms – an interesting mix of infantry, vehicles, and support units – with a different emphasis and different combinations for each faction. The Enforcers are closest to having a ‘complete’ army in our model range, but to take them the next step they need a vehicle. Considering that even their basic troops have jump packs and jetbikes, tanks made little sense, so we’ve instead taken the Enforcers to the skies… 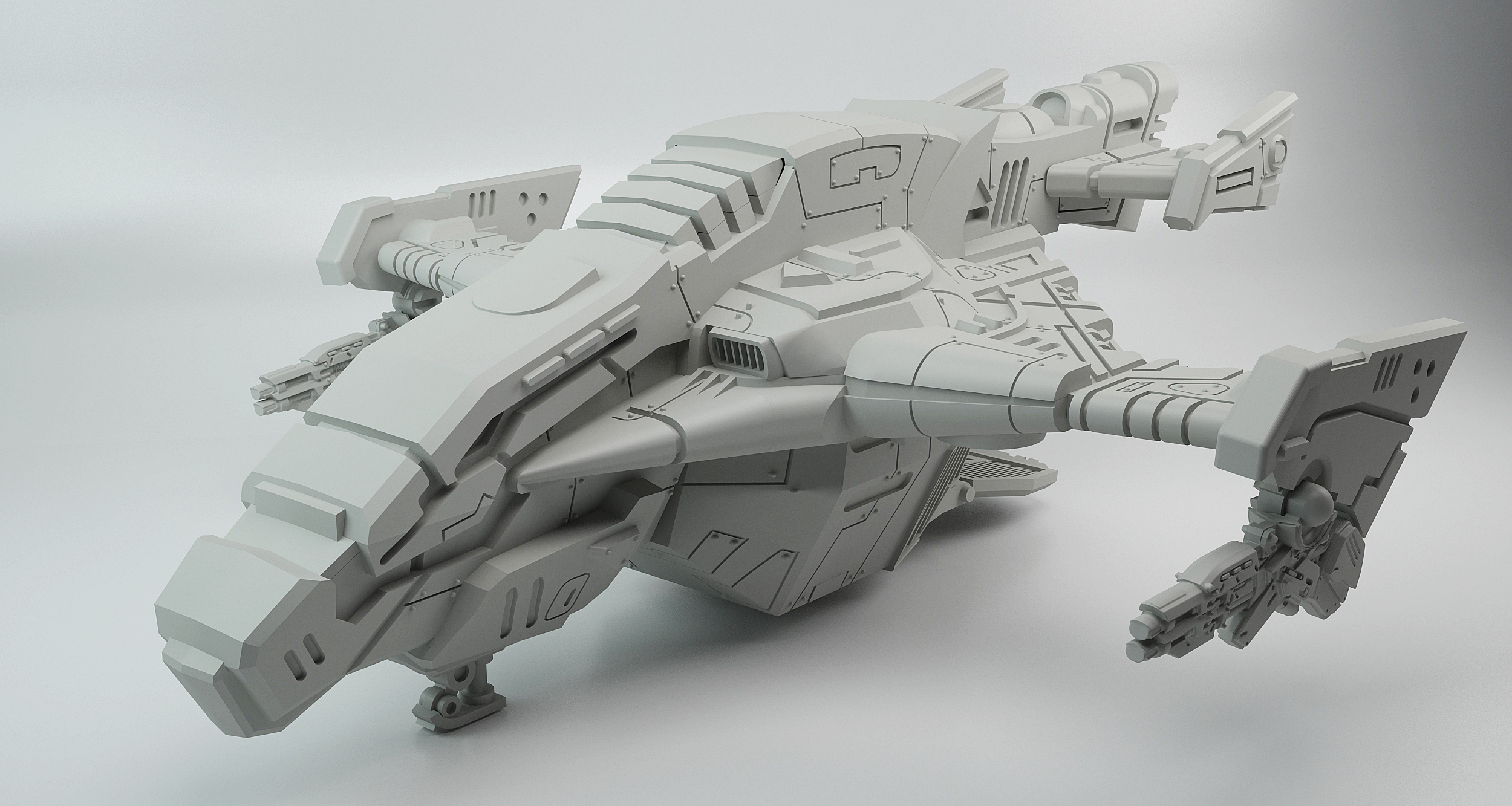 This is still not quite finished – we’ve got some detailing to add to the top of the hull along with a few other tweaks, but you can’t deny this is an exciting addition to our range. The transport compartment on the bottom is big enough for a team of five Enforcers, or it can be swapped out for additional firepower to make the fighter into a bomber! 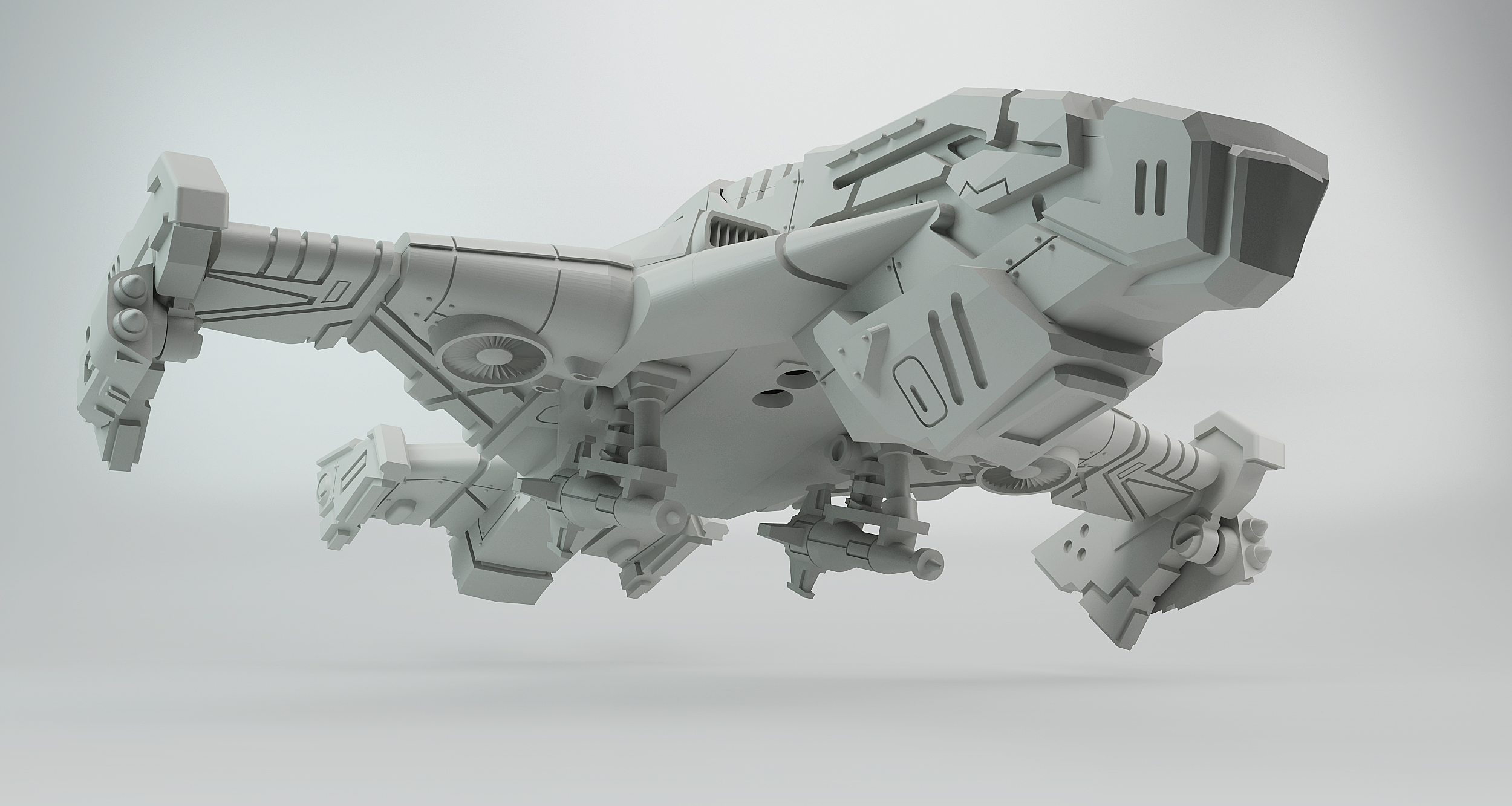 Make sure you’re signed up to our newsletter for further updates on the game over the next few weeks, and look out for news on the Interceptor and the rest of the new miniatures later this year!