The Open Day at the weekend was a very special day for DreadBall fans – it marked the very first ManticBowl! This is going to be a yearly competition run by Mantic, and we hope that it will one day grow to be a fully international event. For now, we’re more than happy with the 30 entrants that we had! 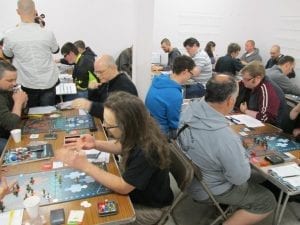 Picture courtesy of Robert Smythe Sinclair on the Mantic Forums

It was an interesting day for everyone involved, as it was the first time that Season 2 teams appeared at a tournament. All eight teams were represented, with a definite bias towards the Corporation (11 teams out of 30). Whether this is because people prefer their play style, or because they’re in the main boxed game, remains to be seen!

The tournament consisted of four games, with teams starting fresh for each one – in effect, each one was a separate exhibition match. Each coach had to take a basic team, and was then given 20mc to spend on advancements, coaching dice, DreadBall cards, Coaches, Cheerleaders or extra players. Advancements were paid for in advance but rolled for (choosing from either the Season 1 or Season 2 table) at the start of each game. The games got underway with surprisingly few hitches, and there followed a great day of gaming fun!

Of course, at the end there could only be one winner (plus two runners up and two special prizes, of course!) It is my great pleasure to announce the ManticBowl 2013 DreadBall Champion to be Rich Jones with his Judwan team, The Wailers. Rich will be receiving an astonishingly pretty metal DreadBall pitch, engraved with his name and ManticBowl 2013; better than a trophy any day! He was followed up by Steve Wallace in second place, with his own Judwan team the Roswell Rangers. Third place was also taken by the Judwan – this time by Brian Clarke and the Pelgar Punchbags! (Looks like those bandy-limbed alien types are the one to beat in 2014…) We also awarded a prize for Most Bloody Coach, which went to Jona Littler, whose Marauder team the Hyson Green Smack Fiends managed to kill seven players across four games. Impressive work! Finally, the “Maybe You Should Try This Instead…” award (and a copy of Dwarf King’s Hold!) went to Jennifer Fullergreen, for her valiant efforts in clinging to the bottom table. Here are those of them that didn’t flee from my camera, along with some people who won prizes our Help for Heroes raffle (in which we raised £160)… 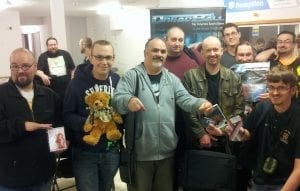 I said “hold up your prizes; “Rich Jones (centre) pointed out that he hasn’t got his yet!

An honourable mention should go to Steven Pretlove, who came and found me just before the winners were announced. In a stunning display of sportsmanship, he pointed out that he’d been using Coaches wrong throughout the day, giving himself a slight advantage. He suggested that his opponents should be retroactively awarded a Landslide victory in each case; this caused a bit of last-minute reworking, but I think he should be applauded for his honesty! That sort of behaviour is what DreadBall tournaments are made of!

If you’d like to know more details, here’s a full rundown of the final scores. I apologise in advance if anyone’s names or teams are spelt wrong… 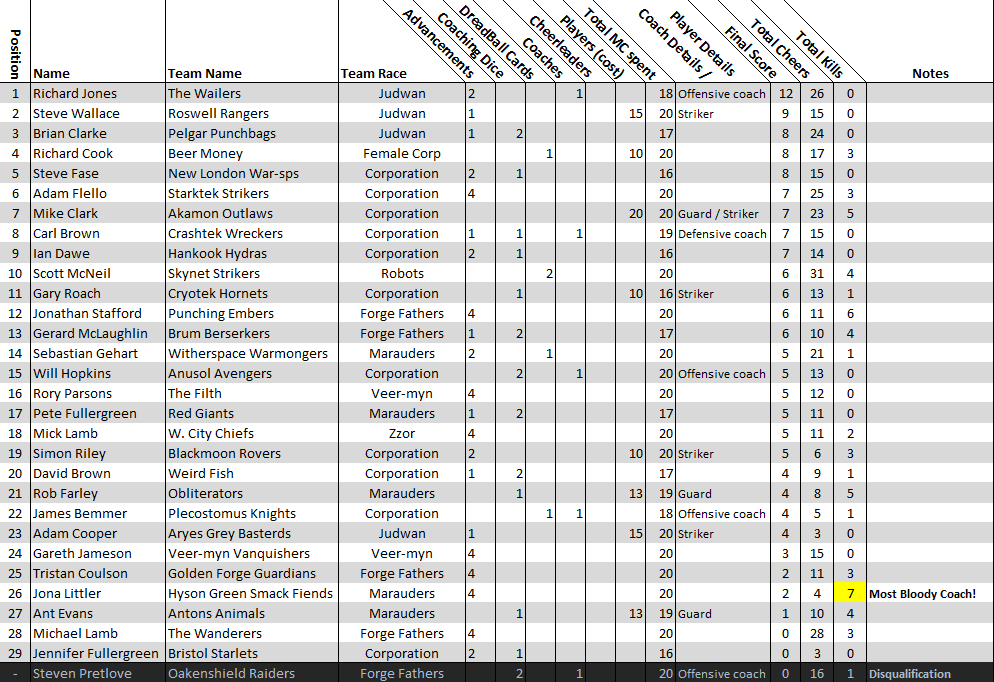 If you’d like to run your own DreadBall event, drop us a line as we have plenty of resources you can use. If you want to see the full tournament rules that were used, they are available here as a download: DreadBall One-Day Tournament Pack V4.0.