We’re pleased to be working with Topps on a new licensed Mars Attacks tabletop wargame, due for release in 2014! Here’s the full story:

Is your tabletop ready to be invaded?  The Topps Company and Mantic Games have joined forces to bring MARS ATTACKS to life as a miniature-based tabletop war-game!  Combining high quality sculpted figures with fast and fun tactical gameplay, Mantic will deliver an exciting new dimension to the resurgent sci-fi property.

Mantic Games, makers of the popular WARPATH and DREADBALL tabletop games, will make MARS ATTACKS their first license.  “MARS ATTACKS is a cult classic series that fans have been falling in love with generation after generation,” says Ronnie Renton, Mantic CEO. “Its oddball blend of retro sci-fi visuals, dark humor and over-the-top violence will make for a unique tabletop experience… our team can’t wait to bring the Martians to life in ways no one has ever seen before!” 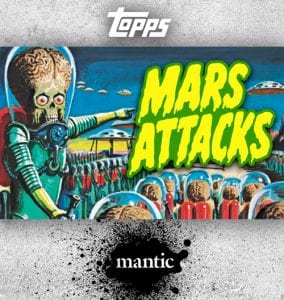 Set against the backdrop of the new and expanding MARS ATTACKS universe, the game will feature all of the fun and thrill of the classic series, plus new characters and factions that will see action in upcoming comic books and toys.  It will also tie-in closely with Topps’ just-announced all-new trading card series, Mars Attacks: Invasion, releasing in October.

“MARS ATTACKS is a world where giant robots, mutated insects and hordes of Martian soldiers face off against Earth’s military and innocent civilians— how could you not want to see a game out of that?” says Topps’ Adam Levine. “Mantic has quickly become one of the best in the business, and they’re the perfect team to adapt our outrageous visuals into this exciting new form.”

For more information on MARS ATTACKS, including regular updates on new products and cards, follow on facebook: www.facebook.com/MarsAttacks.

Mantic Games is bringing fun to sci-fi and fantasy gaming.  In just 4 years, they have already released three complete gaming systems- Kings of War®, Warpath and Dreadball® and many supplementary products, such as Dwarf King’s Hold and Project Pandora.  Their obsession for detail, simple but challenging games, and great value- for money has made them a rising star in the hobby industry.

With sales offices in the USA, UK and Germany, a fully staffed studio and a global supply chain supporting a dedicated finance and production facility in Nottingham, England, they are well set for future growth.