So, the next two weeks are dedicated to all things Kings of War as we cycle through all of our races in turn, starting with the Dwarfs.

The Dwarfs square off against the Undead is Mhorgoth Rising

Whether you’re duking it out in the Dwarf King’s Hold or just like collecting large armies of Dwarfs for your fantasy army, the Dwarfs are a pretty popular choice for Kings of War players (I know I can’t decide between Dwarfs and the new Twilight Kin models for my tournament army…) Well, we kick off the mega-miniatures marathon with a shiny new hub for the Dwarfs to hang-out in, accompanying the existing Undead, Orcs, Abyssal Dwarf and the recently created Kings of War and Dwarf King’s Hold portals. 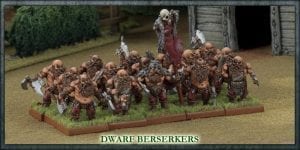 Dwarf Berserkers – slogging it out on foot… but for how long?

Like all of our hubs, this new one has a load of concept art in it, all of the Dwarf background in the Tales from the Forge, hobby articles as well as your free-to-download army list – though don’t forget, you can get all of your free rules and army lists here in the Kings of War hub. The Dwarf Hub is the place to be if you’re a dwarf collector and more content will be added as it becomes available. Don’t forget our forums as well.

On a final point, some of you might be wondering why the title mega-miniatures… well, come back tomorrow to find out!