A major component of the 2nd Edition Kings of War Rulebook is updating the army lists. Not only will we be tweaking the points costs and stats, we’ll also be introducing a few flavoursome additions to each of the races.

Below is a list of suggestions and ideas painstakingly compiled by Matt Gilbert from across the internet to go into the new book. Not everything will make it – some of it isn’t even right for the theme. But what we want to know is – what do you think? What should get added? What shouldn’t?

Let us know in the comments please, and some of this may even get made in the Kickstarter!

New units should be chosen because they give the army something it is missing (that fits the theme) and/or because it makes the army distinctly “Mantic” and offers something not seen in other armies in other systems. We want Kings of War to be the stand-out fantasy game that makes people go “wow”!

– Alchemist (inspiring and can heal efreets) 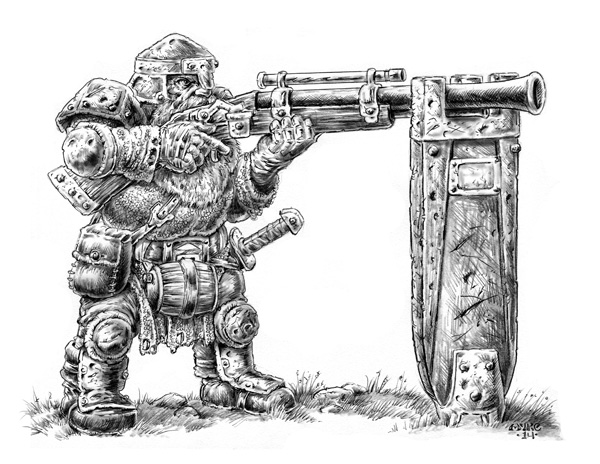 – lizard/dinosaur mounts (and/or packs with herders)

– net launcher (to slow units down)

– Shamen with breath weapon rather than zap

– zombie dragon (could be a mount option)

– darkspawn (unit that comes with zap or can swap for breath)

– caller of the elementals (inspiring minor hero – effectively an ASB)

Forces of the Abyss

– darkspawn (unit that comes with zap or can swap for breath)

– xbows and rifles like dwarfs (the models are already there…)

You know: things like Undead War Mammoths, Titans, Airships, Mountain Drakes, zombie units of 100 models… the stuff for massive games. There are loads of crazy and fun ideas but we’ve kept these out the list above because we’d really like to do those all together either in or alongside a KoW bestiary of generic monsters usable for all armies. Of course, everything is subject to change!

But what about whole new armies? Will we ever see things like ratmen or lizardmen in Kings of War?

Not right now as official army lists but who knows in the future? However, there are some excellent fanlists available for these and the best of those will be reviewed after the official army lists are done and given the same v2 balancing treatment so you know they are good to use in friendly games! Of course, tournament organisers are then also free to consider their use if they wish. These “rubber-stamped” fan lists will be available on the forums as they are now and marked as such.

The Kings of War 2nd Edition Kickstarter is currently funding on Kickstarter and finishes at 11:59pm Monday 1st December. Head on over to Kickstarter to get yourself a great deal on the new rulebook – and maybe even a new army or two!