Warpath is still a relative newcomer to the gaming world (in fact, it’s not even a year old!) and already we have the makings of four great looking armies.

The rules have undergone quite a significant change and over the next couple of months it’s going to go into a kind of an incubation period where it will be play tested to breaking point, both by us internally and by you guys too hopefully. The Warpath 2.0 Beta Rules will be released on the newsletter tomorrow, so make sure you’re signed up!

Also growing and expanding is the range of great value sci-fi miniatures that we produce and we’re always on the look-out for great ways of getting soldiers into people’s hands – and that’s where the One Player Battle Set have come from! 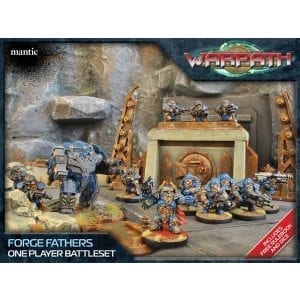 Released back in September, these £30 sets get up to thirty great-looking infantry figures, often with a cool monster like the Iron Ancestor or the Marauder Raptor, as well as free sci-fi wargames ruleset and dice! If ever you wanted an opportunity to put together a sci-fi force and, from the same box, play a fun and fast sci-fi wargame, then it’s these sets.

If you’ve got friends that are tempted by the game or the miniatures (remember our figures are compatible with other major gaming systems!), then you can’t go far wrong with a One Player Battle Set, all of which give you a roughly balanced (depending on how you configure them!), great value starting force of miniatures. Check out these sample army lists: 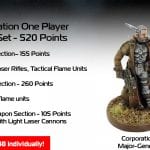 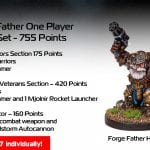 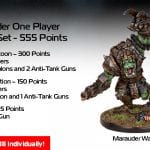 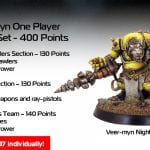 Cool models, affordably priced and free rules – picking up a set each means you can get gaming straight away.

That’s four roughly equal starting forces all at great value – if you’re interested in starting Warpath, expanding your force or getting some cool sci-fi models, you can’t go far wrong that a One Player Battle Set.

Stay tuned on the Mantic blog as we’ve got a bit of a competition coming up later!