We are getting ready to jump in our van and head on down to the London ExCel Centre for this year’s Salute show.

Mantic will be there in force, bringing with it at least 3 different demo games, a painting crew, two famous games designers, nine amazing army deals (just check them out here!), all the latest pre-release items and as many studio models that we can find cases for!

Free Orc Sprue
We’ve a box of Orc Sprues, very limited in number, and we will be giving away individual sprues to some very lucky people! You’ll be able to see the Orcs in person, including the three ups, units, and Golem with have the Krudger’s Gang hero set as well! 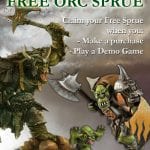 Demo Games
Kings of War and a special 3UP edition of Dwarf King’s Hold will be setup for you to play with under the watchful eyes of Alessio Cavatore, Jake Thornton and the Chelmsford Bunker! Alessio will be playing special timed games of Kings of War at set times, so check out all the details here! 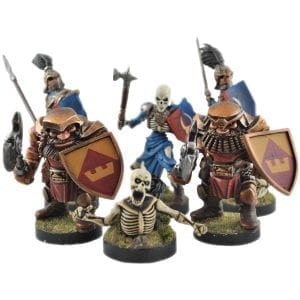 Golem
The guys from Golem will be on hand painting some orcs (maybe even painting Orc hero set featured on the blog!) as well as answering your burning painting questions.

New Releases
We’ll have Dwarfs Kings Hold (with it’s £5 off voucher inside), Abyssal Dwarfs and, well, all the latest releases we can muster on the stand, alongside the mighty Army Sets and individual kits that make up the range. Your one stop Mantic shop!

Armies on Display
Check out all the models in the flesh (as it were) as we show-off our painted armies and display models. You can even take control of the studio demo armies on the Kings of War board, or use the three-up models in the Dwarf King’s Hold models.

There’s plenty to do on the Mantic Stand so if you’re attending, come and chat with us, play some games, and get your orc sprue!

Can’t get to Salute?
Well, we’ve put the nine (yes, nine) fantastic army deals up on our website (including our new £200, 350+ figure Undead Show Special Army Deal). Of course, the Army Deals ship totally post free, and are rammed with plastic miniatures, contain free Kings of War rules AND limited edition/pre-release figures. Get yours whilst you can, there only available for a very limited time only! 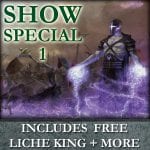