The Surtr Heat Cannon is a heavy anti-tank weapon, a much larger version of the thermal guns carried by Forge Father Infantry. The Surtr’s bright ray of extreme heat can burn through the most heat resistant alloys in seconds, vaporising tank crews, turning electronics to slag and causing munitions to detonate. The Surtr excels as an ambush hunter, lying in wait until enemy armour comes within range, whereupon it will be destroyed in spectacular fashion. 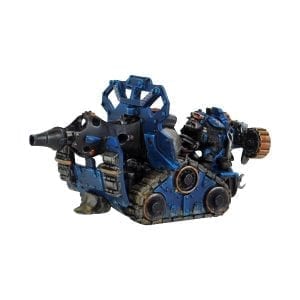 The Surtr Heavy Heat Cannon is a new resin (as in traditional resin resin) upgrade kit to the Jotunn Heavy Hailstorm that not only adds a new Barrel to this excellent artillery piece, but also a support platform and crew for use with the spare gun. Either gun will fit, so you can keep the Jotunn Heavy Hailstorm on the main carriage and have the Surtr Heavy Heat Cannon on the platform if you so which. 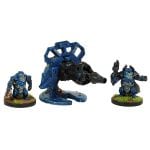 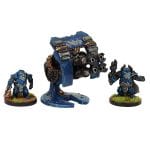 The support platform will be getting rules for use in Warpath at a later date (though sooner than you may think ;))

The other upgrade to the Forge Fathers coming in August is the new ten-dwarf Stormrage Veterans Section kit, designed to make it easy to do an entire army out of these guys. Armed with light support weapons, the new section adds in an additional heat hammer and a new body to carry it with it!

Add an Iron Ancestor and Surtr to your force of Stormrage Veterans (not forgetting the Drakkarim either!), and you’ll have something pretty powerful indeed!

Finally, all of the new Forge Father kits, including the Iron Ancestor (yes, that really is it’s price!), are now available to pre-order!