When I first got the sprues, the first thing that struck me was the amount of variation in the kit. At first I thought the models might be a bit limited, but it was really exciting as I made all 20 figures individual very easily. All the knives, guns, ammo packs, heads and grenades means that every figure can be different… it was a big surprise. I built a couple of them to come across like a mini command squad; you’ve got the heavy weapon guy, a mad guy with the scanner – even a big stabby guy! There’s so many different personalities in the squad.

When it came round to painting them, I had a simple brief. Ronnie spoke of wanting scavenger, freebooter pirates that stole their armour from here, there and everywhere. I then took to the internet for inspiration, heading over to the Mantic forum and Facebook page and asking people what colours the figures should be. It was here that the red and black came about. Coupled with Ronnie’s words, and the fact the Marauders were fighting them in the starter set, I chose the blue armour of the Forge Fathers and a Yellow and Black hazard stripe idea for some of the mis-matched armour plates. The scavenger, marauder look comes nicely from this. 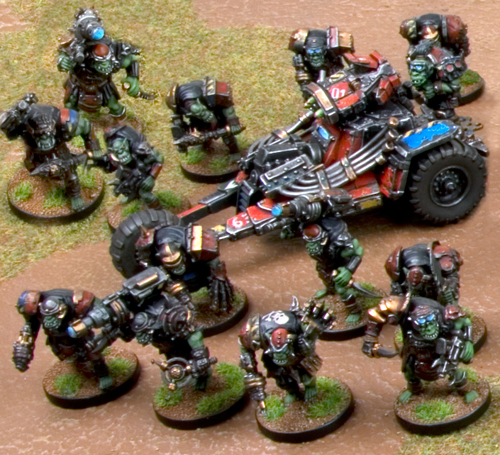 Onto the skin and I knew the green couldn’t be dark otherwise it’d get lost against the black. It wouldn’t pop in the battlescene shots or on the packaging, so it had to be a bit brighter. The same with the lenses really… I was really timid when it came to painting them. Obviously a mid-blue was used on the Forge Father armour, a dark blue would have gotten lost. They couldn’t be red as this was the colour of their armour and they couldn’t be green because I wanted the skin to be the only green bit. So I went for a light blue and put it on the goggles… it really brings the attention to the models face which I really like – I really enjoyed painting the mask. 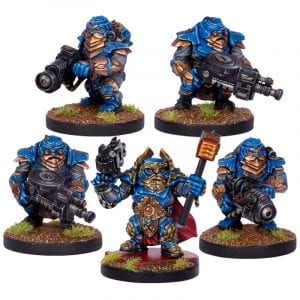 Colour choice was a really important decision – the Forge Fathers couldn’t be green because that would clash with the Orc skin in the Fate of the Forgestar box, and couldn’t be red because the Kings of War Dwarfs were already red – there were a lot of different things to take into consideration.

The hardest part when painting the unit was keeping them quick but being creative at the same time – this is something I’m very happy with! It was important to me that people ‘buy in’ to the scheme and keep the paintjob attainable. People can see how well I can paint when they look at figures like the Stormrage Veteran champion (with more to come!), but sometimes it’s just about getting large armies on the table quickly – which is what Mantic is all about.