Mantic will be travelling the globe again this year, with Adepticon, Gen Con and Salute being three of the biggest events we go to. For the first time though, we’re going to PAX East on the 11-13th April.

On the original DreadBall Kickstarter, we teamed up with the fine folk at Penny Arcade to create a DreadBall MVP based on Gabe – and we all know his story! 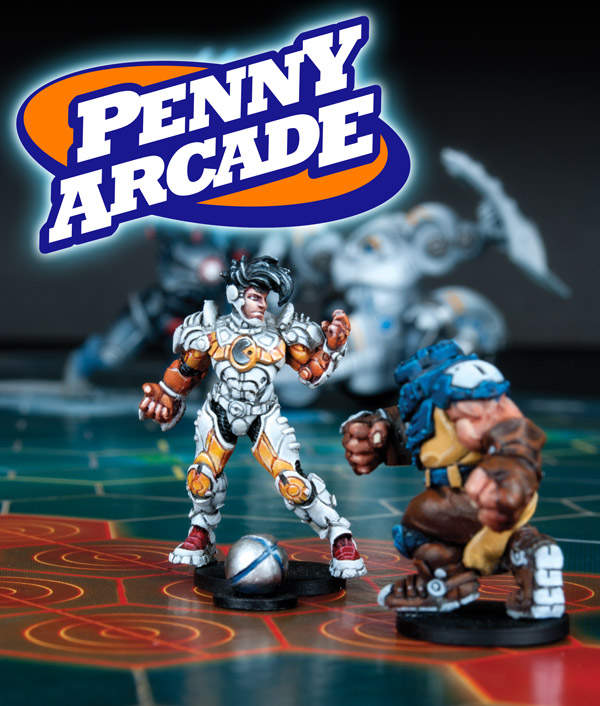 When Jonathan “Gabe” Gabriel died on the pitch, smashed into a uniform paste by the legendary Buzzkill, it was assumed to be the end of his career. When a jockstrap rich in genetic material was discovered, he became the first crowdfunded resurrection by cloning.

We wanted to complete the set – because what’s Gabe without Tycho? So to celebrate our attendance at PAX East, that’s exactly what we’ve gone and done.

I’m sure you’re familiar with the crowdsourcing project that resurrected Jonathan “Gabe” Gabriel following his… unfortunate demise. At the hands of a Space Ogre. With huge, meaty boulder-fists. Named “The Face-Eater”. I’ll let you figure out the last part.

Now, I know there are rumors that I set up the aforementioned “accident” because “I have literally said” that “Gabe is a talentless hack” who “only got ahead” by “screwing me over” and I’ve been “struggling in the backwater leagues ever since.” Or that I swore to the “unholiest of all the unholy gods” that one day I would wreak my “glorious vengeance” upon his prostrate form. …but yeah, I guess I just wanted to say how crazy that all sounds.

Especially considering I was one of the major backers behind the resurrection campaign! Do people really think I paid to bring him back, just so I could kill him all over again? Now that’s crazy.

The limited edition, brutally posed, spine-swinging Tycho is now available in premium metal to add-on to your pledge for $10!
And finally…

Penny Arcade will be featuring Xtreme Tycho and the Xtreme Kickstarter on their site later today and we can’t wait to see what the reaction is like. This amazing new figure is in incredibly limited supply – you will only be able to pick up this special edition model on the DreadBall Xtreme Kickstarter and one or two other promotional events, and even then for a limited time only, so we recommend grabbing it whilst you can!

Thanks to Gabe, Tycho, Mike and everyone at Penny Arcade for their support – and thank you for supporting the DreadBall Xtreme Kickstarter!