Gregson fled across the ruined outpost, and somewhere behind him, a deranged beast followed.

He’d been hiding out in a network of caves less than a klick away since the first reports of monsters and gunfire, living off emergency rations he’d found on the way there. Things had been quiet – all the more so when the long-range comms signal died. One of the nights he’d ventured to the cave mouth to look out over the jungle canopy of Nexus Psi, he’d seen an incredible display in the skies; he’d seen enough CorpCast footage of orbital disasters to recognise a collision between two or more ships in the upper atmosphere. He’d fled back to the safety of the lower caves when the debris started falling like a series of flaming comets. He’d stayed there until the food ran out.

Now here he was, sprinting for his life across blood-spattered neocrete as one of the creatures he’d heard so much about across comms chatter chased after him. He’d only seen it once, not having dared to look back at it once it started chasing him, but that was all he needed. It was burned into his brain forever, maybe to the end of his life; of course, given his current situation, that might not be too far away. The thing was apelike, with long arms ending in wicked claws. Its head was disproportionately small, protruding from a bony shell that looked like it could easily stop gunfire. Of course, being a senior technician attached to an Exploration / Retrieval team, he wasn’t armed, but the thought had still crossed his mind. 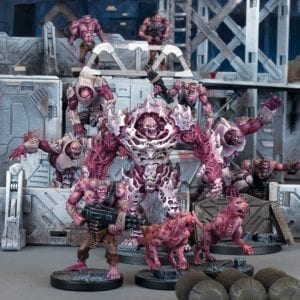 Given the beast’s mass, he was astounded that it could move so quickly. He’d only evaded it so far by ducking through narrow gaps and outmanoeuvring it across the tight confines of the outpost. It was gaining on him, though. He altered his course to duck down a covered alleyway between two habtainers, the entrance partly choked with rubble.

Gunfire barked behind him, and he almost sprawled to the floor in shock. He turned to look over his shoulder and saw no sign of the creature. Then it flashed past, clearly heading for whoever had opened fire. He didn’t know who his saviour was, but he muttered a word of thanks all the same. The poor wretch didn’t stand a chance.

There was a sound like a blade being drawn from a silken sheath and a hum that reminded Gregson of the energy cutters they used for deep-core extractions, followed by a squeal of agony that couldn’t have been human. Then… silence. He crept back to the mouth of the alley, half expecting to see teeth and claws flashing towards him, but something made him stay his course.

The creature was slumped to the ground no more than three metres away. The top half of its head lay a short distance away, and a disgusting smell of burnt offal hung in the air. His saviour stood silent, regarding him evenly. He was tall, encased in slate-grey armour, his face hidden by an enclosed helmet. The technician had never seen one in person, but there weren’t many citizens in the GCPS who would fail to recognise the ominous bulk of an Enforcer. A heavy pistol was held comfortably in one hand; the other was clenched into a fist, a blue-white energised blade extending from a device the warrior’s his wrist. He relaxed his hand and the blade retracted smoothly. He took two steps towards Gregson and began to speak, his voice amplified by external speaker grilles in the armour.

Before he could finish the first word, a second creature, almost identical to the first, sprang from hiding with a defiant shriek. The Enforcer span, raising his pistol and snapping off two shots at impossible speed, but sure enough they were deflected by the bony plates covering the creature’s chest. It hit him with its full weight and both fell to the floor. Gregson scurried back into cover, looking around for a weapon to defend himself with. There was nothing.

The armoured warrior rolled with the impact, trying to pin the creature to the ground under the weight of his suit, but it was too strong. It was as though it had been created solely with speed, brute force and resilience in mind; the ultimate predator. It threw the warrior off, and he skidded across the neocrete, raising a flurry of sparks. He didn’t waste the opportunity, bringing his pistol to bear with surprisingly good aim, and unleashed a salvo of shots. Gregson couldn’t tell whether they hit their target, but the creature ducked back long enough for the Enforcer to regain his feet. He clenched his fist and the energised blade flashed back into life. The respite gave the technician a better chance to look at the new arrival, and he saw that it wasn’t quite identical to the one that had been chasing him. It looked older, and its face was patterned with scars. Its carapace was gathered into ridges of sharpened bone. Blood-flecked drool dripped from between its needle-like teeth. It was nothing less than terrifying. 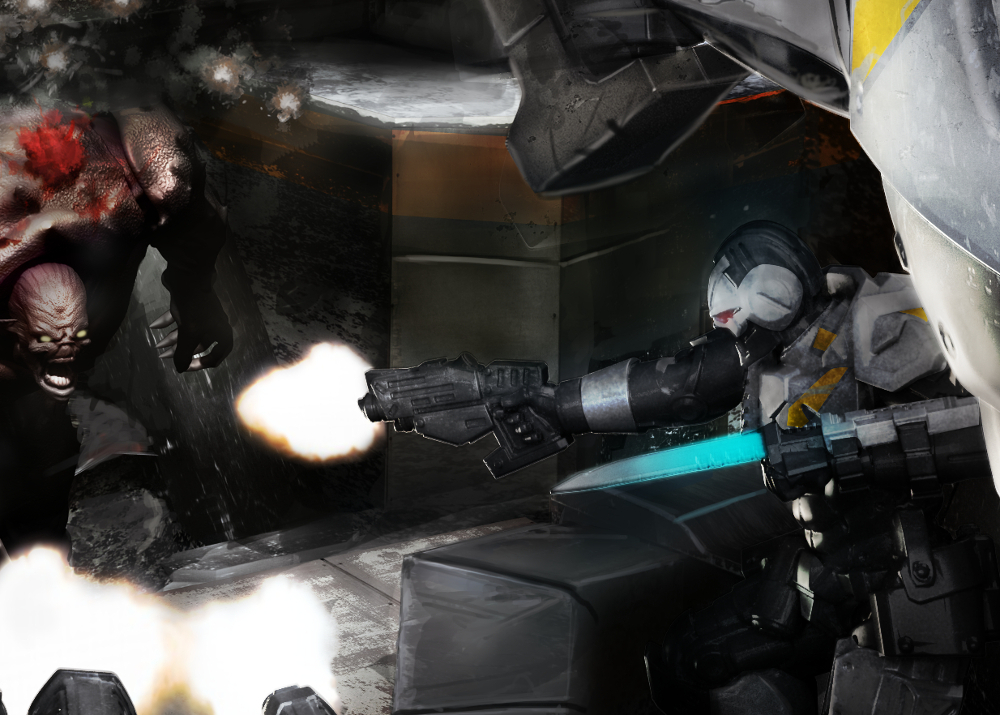 The two combatants seemed to size each other up for a moment. Each must have been a veteran of countless battles, Gregson realised. They circled, bloodshot eyes locking with hard red lenses. The Enforcer held steady, wristblade held up at shoulder height, pistol arm extended; the mutant dragged its claws along the ground, twitching and spasming with barely-contained fury. Then, with a roar of primal rage, it tensed to leap.

The Enforcer hesitated for the smallest of moments before firing a single shot. The beast was springing forward, legs extending like pistons, claws outstretched, as the round took it in the centre of the face. Time seemed to pass in slow motion; its stub nose caved in on itself, pulling its lip up in a sneer. Its head whipped back even as it clumsily took to the air. Something in its brain seemed misfire and its arms flailed almost comically as it overbalanced and rolled to the ground. It continued to flail spasmodically until the Enforcer stepped forward, pushed it onto its back with the tip of an armoured boot, and plunged his blade through its neck.

Gregson broke cover, feeling almost as though he could weep with relief. He knew he looked pathetic, but he didn’t care; he was going to get off-world, and this would just be a memory.

His saviour glanced up at him, and raised his pistol.

The technician faltered, and the Enforcer fired a shot past his shoulder.

“Keep running. You’re drawing them out.”

The armoured brute fired a second shot that passed so close he felt it rush past his ear. Without another moment’s thought, he ran.

Gregson fled across the ruined outpost, and somewhere behind him, a deranged beast followed.