Mygamestore in Finland has really gone for it with Warpath and recently sent us pictures of their new demo boards and miniatures.

“After the holidays me and Eric finally got around some hobby stuff as we prepared for a new table project. We had planned a new scenery setting for a long time, making concept drawings and sharing ideas on a constant base. In some point we decided that the setting could be a bit bigger so we could use it in the springtime promo events and conventions of Mygamestore.fi. For last year’s Model Expo we made a Ash Waste Lava field for Mantic Abyssal Dwarves and Undead to wage war upon. It was time to top that… 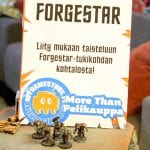 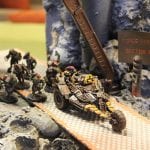 Forge Star section 7 under attack by the Marauders

We began planning different worldscapes the project could take direction from. Originally I wanted to do something related with desert setup as I had a few ideas. Because Mantic has great influence in our forthcoming events, we decided to use company’s WARPATH-environment as a core idea. The starter box is called Fate of the Forgestar, which was one of the bloodiest conflicts of Mantic’s Space Dwarfs, the Forgefathers. This was the basic concept. 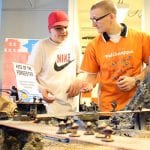 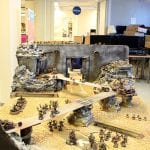 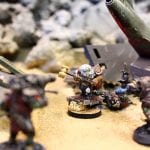 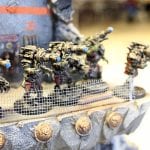 A selection of photos from Mygamestores archive – the board looks brilliant and the hero will the hammer is a particular favourite. Looks very menacing!

Our Forgestar would be a dusty, buzzing base of operations in a desert mountain fortress built by the Forgefathers. It would be an important safe haven for hundreds of imperial or unallied space travellers, traders and military units alike, their aircraft landing and taking off constantly from the dozens of landing pads supported by the mountains. The Sector seven was a guarded area, but paramilitary at best, and it’s primary function was to mine for precious ore and to act as a spaceport in the Forgefather Empire. Under ground huge machines would work around the clock and the exhaust fumes would occasionally block sunlight. Squat, armoured warriors would change guards in a organized manner, watching over their massive constructions.

This is our story about the birth of a Forgestar.” 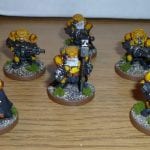 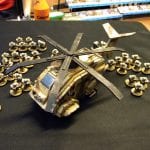 The Forge Father army has a transport converted from a Games Workshop Stormraven Gunship.

You can find more pictures on their Finnish Blog here of their Forge Father army and here, which shows them building the scenic board.