Next month is the release of DreadBall Xtreme, the latest and greatest addition to the awesome Dreadball range!

While Xtreme is a totally stand alone game and you don’t need to either own or have played the fantastic ‘classic’ game in order to enjoy it, DreadBall has thousands of dedicated and devoted fans, so it is worth talking about the key differences between the two sets.

1. Sponsors– You take on the role of a Sponsor, the Machiavellian masterminds who set up the illegal underground matches and hire the teams of desperate and dangerous individuals who play the game. The team’s Sponsor also have a direct impact in the game as during the match they can intimidate their own players into putting in that extra effort, threaten the opposition into playing badly, or even screwing out extra cash by placing side bets on the final result. There are two Sponsors (the Warden and Blaine) in the boxed game, and more will be released in the future to give you more play styles and flavours of team

2. Hiring the teams – There are no limitations on which players you can pick for your team, the full range of aliens, mercenaries and scum from the Dreadzone Universe are available for you to choose and use in your Xtreme teams, plus two new ranges in the box- the Convicts and the Kalyshi. The different players have different costs to use depending upon which Sponsor you are using, giving each team their own unique feel and preferred style of play, but in the end it’s up to you to choose!

3. Variable pitches – To represent the underground and illegal nature of the Xtreme contests the players role to see which of the six pitch set ups are going to be used in that game. This determines where the obstacles and Strike Posts are placed and so creates different tactical challenges for the coaches and helps each game to feel different.

4. Arena of death!-In Xtreme it’s not just the opposing team that can kill your players. The arena is littered with booby trapped exploding crates, and Coaches can play vicious tricks on the opposing players from the Sabotage deck of cards, such as having the crowd shoot at them with riot cannons.

5. Blood on the ground – There are not referees in the world of Xtreme so the game is brutal and very, very violent. You are able to make limitless fouls and injured players stay in the arena rather than being whisked off to nice safe hospital rooms- they may struggle back to their feet and carry on, or they may just bleed out and die. Life is cheap and players are expendable.

6. Some people are on the pitch!– You can bring on as many players as you wish (as long as you have hired them). Each game starts off with four players a side, but you can pile on as many as you want following that. This leads to some very tactical decisions as the coach has to choose wisely how to use their actions. 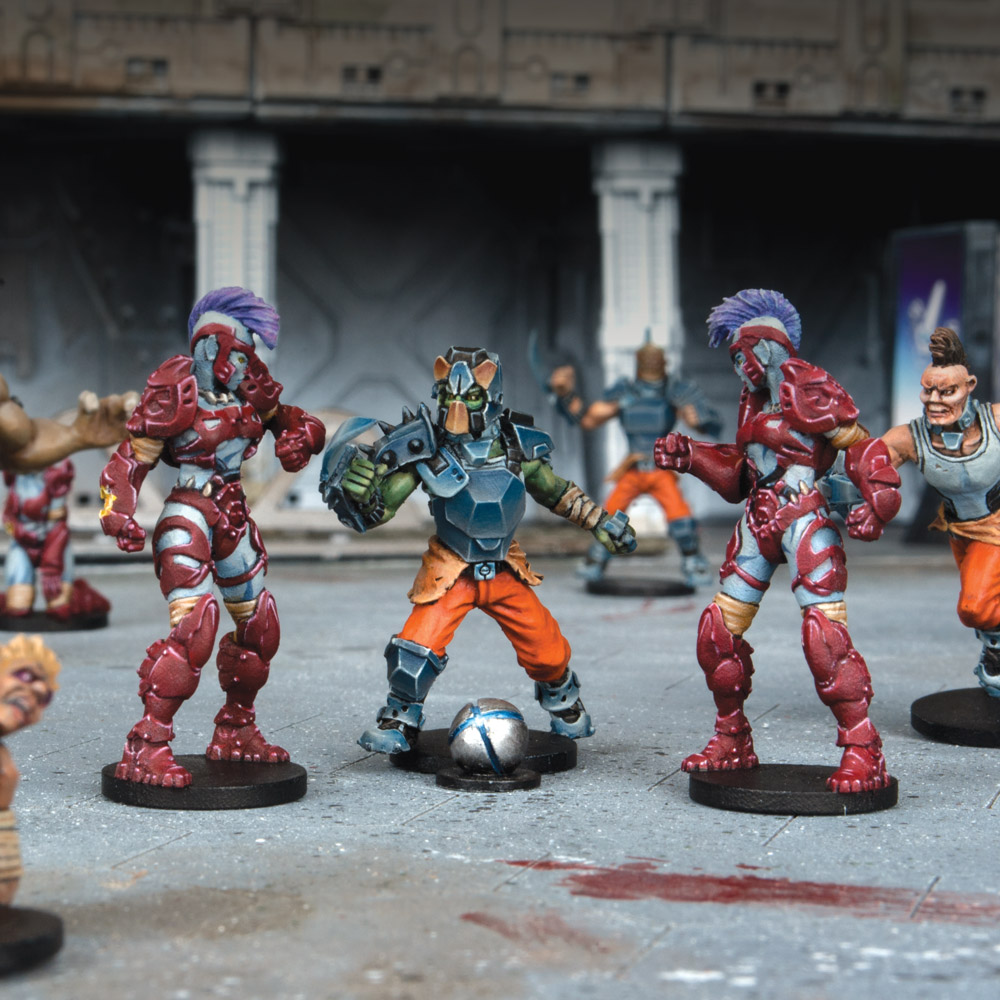 Alongside all of this you still have the fast, fun and furiously paced game play that you know and love- it has the same dynamic game play full of Strikes, Slams and Steals, but everything is just even more Xtreme!