Okay, so I’m not a fast hobbyist.

Remember way back in June when I got all excited about starting my Undead collection? I was really fired up, and I took my One Player Battle Set home to build. I spent a fun weekend assembling zombies, ghouls and skeletons, and felt like I’d made a great start! All that remained was for me to get them painted, and how long could that take? 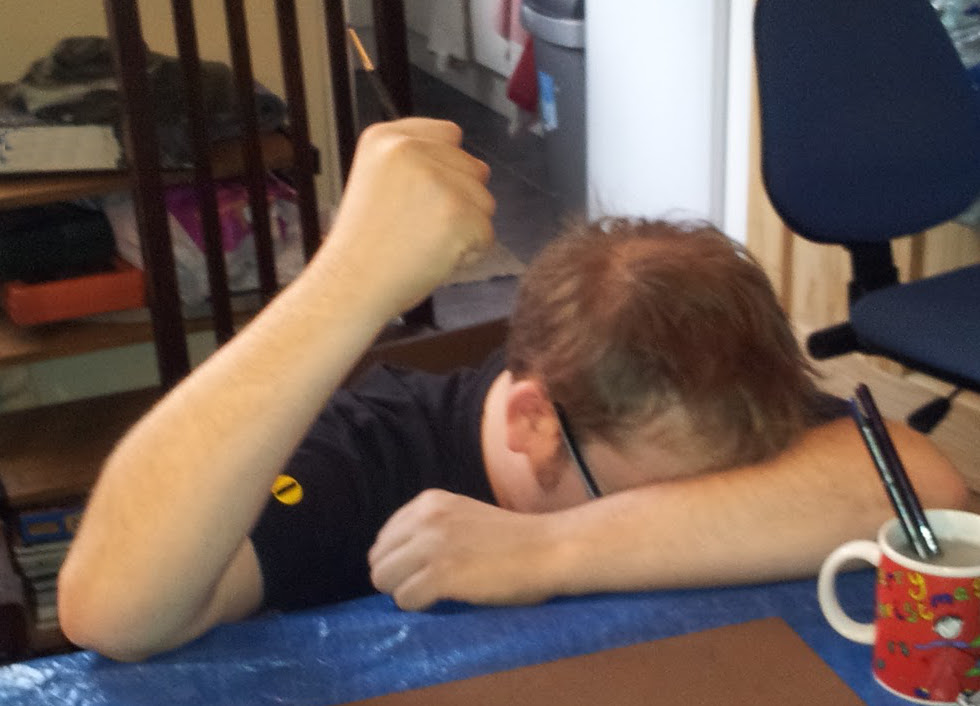 Pictured: me attempting to paint models in a timely fashion.

Unfortunately, things like upcoming novels and short story compilations and DreadBall have been taking up my hobby time, so it wasn’t until this weekend that I finally sat down to get onto the next stage! (For anyone who’s wondering, no, that wasn’t my Undead army that won a game against Curis in our battle report a few weeks ago – that was Stew’s, which he was kind enough to lend me so we didn’t have to wait until mid 2015 for me to get my army table-ready.) The first thing I did was use some modelling putty to hide the joins at my zombies’ shoulders. The ball-and-socket actually makes for a pretty snug fit, so this isn’t entirely necessary, but a few minutes’ work here will save a lot of time when I come to paint the models – it’s a lot easier to paint quickly when you’re not having to disguise bits like this. Similarly, I spent a short while removing the mould lines from my models. These are almost unavoidable on plastic miniatures, as they’re formed at the join between the two halves of the plastic mould, but it’s quick and easy to remove them with a sharp modelling knife.

Next, I brushed PVA glue onto my bases, and dipped them in some modelling sand. A lot of people don’t base their models properly, but if I could give you one tip, it would be this. A nicely finished base takes very little effort and anyone can do it, and it makes a model look massively better – at a glance, a model painted to tabletop standard with a decent base can look better than a beautiful display piece without one! 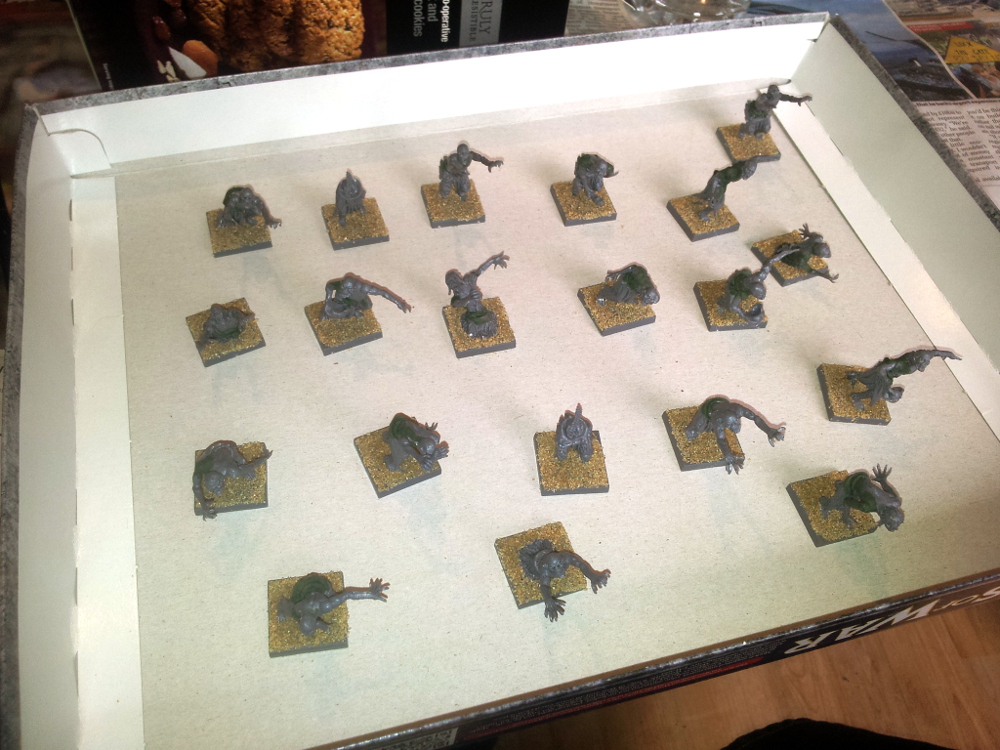 Note the biscuits. These are vital, and you should not scrimp on quality.

Once I’d let the sand dry, I undercoated my models with a black basecoat spray. There are plenty of colours available, and I was considering a brown basecoat, but in the end I went with black. I’m a creature of habit, and I’ve painted over black for years! It just feels right. It’s worth noting that I stuck the sand on before I undercoated my models. I’ve noticed a lot of people not sticking sand on until after they’ve finished the rest of the model, but I find that the spray helps cement the sand in place, and will stop it from coming apart when you get to the drybrushing stage.

This is as far as I got, unfortunately, before my hobby time ran out. Still, I felt like I’d achieved something great – I haven’t done any hobbying since I finished my DreadBall team, the TuStax Wranglers, which will no doubt make it into a blog post one day. I’m hoping to pick up my zombies and ghouls later in the week, and if I do I’ll get some photos up of the results!

Before I go, I’ve got a top tip for all the Kings of War players out there. As your models need to line up next to each other, it’s worth bearing this in mind when you’re assembling the unit. I actually build them in ranks, lining them up as I go and making sure they fit. If a model’s leaning over to one side, make sure his neighbour isn’t leaning into the same space, or you’re going to get into trouble later! To keep track of their proper order, I use a grid reference system, which I draw under the bases with a Sharpie. Easy! 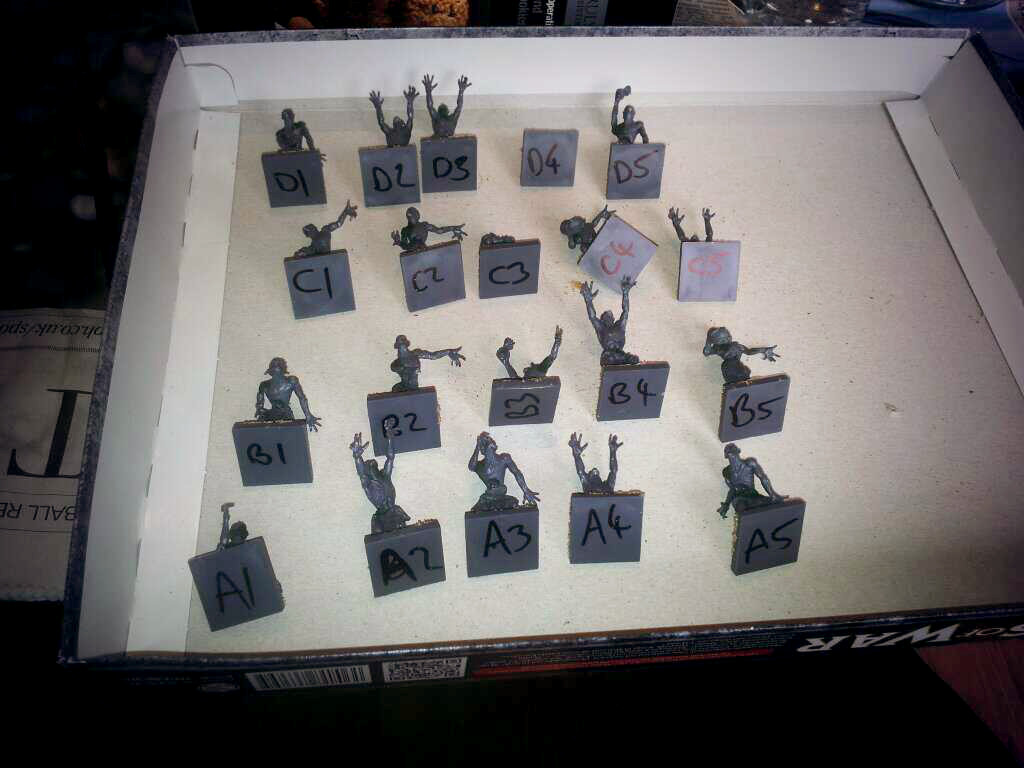 I’ll be sticking my models onto a plasticard regiment base once they’re painted, but for now this keeps ’em in order!

That’s all for now, but what I’d like to know is what you’re working on! There are several new armies starting up in the Mantic bunker, and I’m sure that with all the new releases going on there are plenty out there across the web. Why not head over to our Facebook page and post some pictures on our wall? Also, if you’ve got any top hobby tips, share them with us in the comments below!