And we’re back… briefly anyway.

Now those of us who went to the Spiel show in Essen last week have (nearly) recovered, we thought we’d give you guys the run down on what whet down at the show, whilst giving you a taster of what you can expect if you come visit us at the shows!

Essen Spiel was something very special for us – it marked the release of the Mhorgoth’s Revenge Fantasy Battleset and the Kings of War rules! Those of you who attended the show would have had the chance to get your mitts on the German translation – some even bribed Alessio into signing a copy.

With thanks to Christian Schlumpberger who helped us out with a few demo games in German, the Mantic Team and Alessio ran demonstrations of the new rules using the two game legal armies straight out of the Battleset, with the Dwarfs fighting the Undead to get back their stolen beer. A fierce fight? You bet ya, but imagine how annoyed the Dwarfs were when they realise it was actually gun powder and not ale! 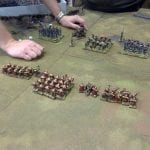 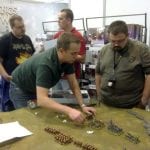 The games were very popular and our Mhorgoth’s Mountain (that is, our huge pile of Battlesets in the corner of the stand) was reduced to naught but a low lying hill and, of course, that’s not all. One of the best things about coming to see is you get to see how good the figures are in person and we often bring new previews and forthcoming releases to the stand. Our cabinets are always very popular! 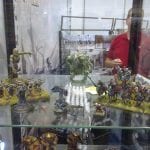 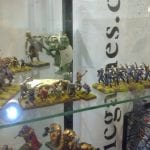 Essen is a great place to see lots of new and cool stuff and there is something for everything whether it’s LARPing, Card games, Board games, comics, actions figures and of course tabletop gaming.

For more pics, head over to Mantic Facebook page and check out what else was there, including pics of three-ups of the Warlord Games Plastic Germans which we’re bundling with our Zombie frame to allow you to make… plastic German Zombies!!

Mantic is now regularly attending as many events as it can to let you guys try the rules, see the figures and pick up all the latest gossip. Only half the Essen team came back to the UK on the weekend – Steve and Alessio have continued on to Italy where we’ll be supporting Steel Models – our exclusive distributor in Italy – at the Lucca Comics and Games show. Here we’ll have the Italian translation of the rules available and will of course be running our demo games as well! Check out the details here.

If Italy is a little too far of a stretch however, Chris will be heading over to the Havant HobbyCraft store on Saturday 30th October with demo armies, the rules and some primed figures so whether you want to see the rules in action or just fancy painting a few of the new zombies, get yourself over to the Havant store. We’ll be there from 10:30!