Okay, the weather’s still a bit grim (in Nottingham, anyway) but we’re already preparing to kick off our Summer of Kings of War!

With a massive range of releases for Kings of War over June, July and August, it’s never been a better time to get involved with the fastest, easiest-to-learn Fantasy Battle Game there is. Following a hugely successful Kickstarter campaign last year, we’re now starting to receive painted models at Mantic HQ, and we’re going to spend the next seven days providing you with photos of as many Kings of War miniatures as we can!

We’re starting today, with a first good look at the Trolls… 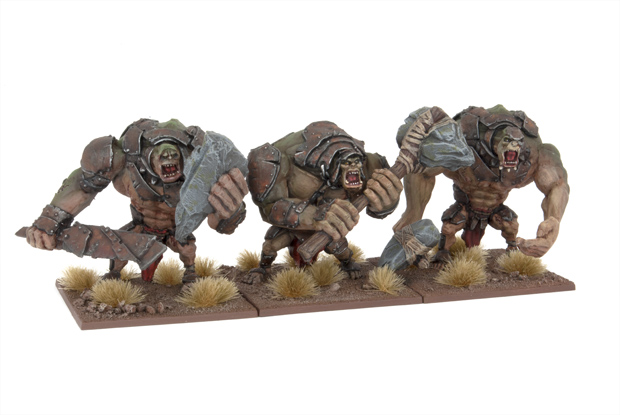 Trolls are large, feral humanoids of dim wits and insatiable appetite – perfect allies for the armies of Goblins, which use them as shock troops. Trolls can regenerate almost any wound and only fire can truly destroy them, while their crude war-clubs smash through armour and crush bones with terrifying ease.

Trolls are released in June 2013, and will be $25 for a set of 3, making a 120-point Troop in an Orc or Goblin army. Also, don’t forget that as long as you also take a solid unit of Orcs or Goblins, you can take them as allies for any other Evil army!

What do you think of the trolls? Will you be getting a box or two? Let us know your thoughts in the comments below!