Tale of a King: Clash of Kings Road Trip Part 10a

As I was the spare player for the Welsh Regional I had plenty of time to watch some games and what I thought would be quite good for the rest of the Mantic Community is a battle report between Chris Morris and his Goblin Rabble versus Stephen Kerslake and his Undead Legion.

Chris was currently sat on 37 points our of 40 and Stephen was on 28. Basically Stephen had to win to be crowned Regional Champion!

Once the round was announced both players moved their armies over to table 1, said hello and shared their army lists.

Couple of special rules I’ll explain now before getting into the report. The Goblin’s (except the Giant) suffer from ‘Utterly Spineless’ and all the Undead unit’s have the ‘Shambling’ rule whilst the Necromancer’s have the ‘Dark Surge’ spell.

Utterly spineless – whenever a unit with this rule receives a Charge! order roll a D6 – on a 1 the unit ‘misunderstands’ the order and instead halts.

Shambling – units with this roll may not move at the double. They also treat all wavering results as steady instead.

Dark Surge (n) – Can only be cast onto shambling units, roll a number of dice equal to ‘n’. For every 4+ rolled the unit moves forward 1″. If it moves into contact with an enemy unit it counts as charging.

We were playing Kill & Pillage with 5 objectives

Stephen popped his Scrying Gem and made Chris deploy 3 unit’s to start with.

Both players deployed their warmachines quite spread out along their deployment zone, both of Stephen’s Hordes deployed in the center with Skeleton Spear Regiments outside of these. Wraiths were deployed just behind his line as they had fly so could just pop up and over the intervening units.

Chris lined up one of Hordes opposite the Skeleton Horde placing the other on his left flank, mawbeasts and fleabags were then placed all along the twelve inch line. Chris also made use of the hill just in his deployment zone getting one of his Rock Throwers on it with a War-Trombone just behind that would walk up once the horde had pushed forward. 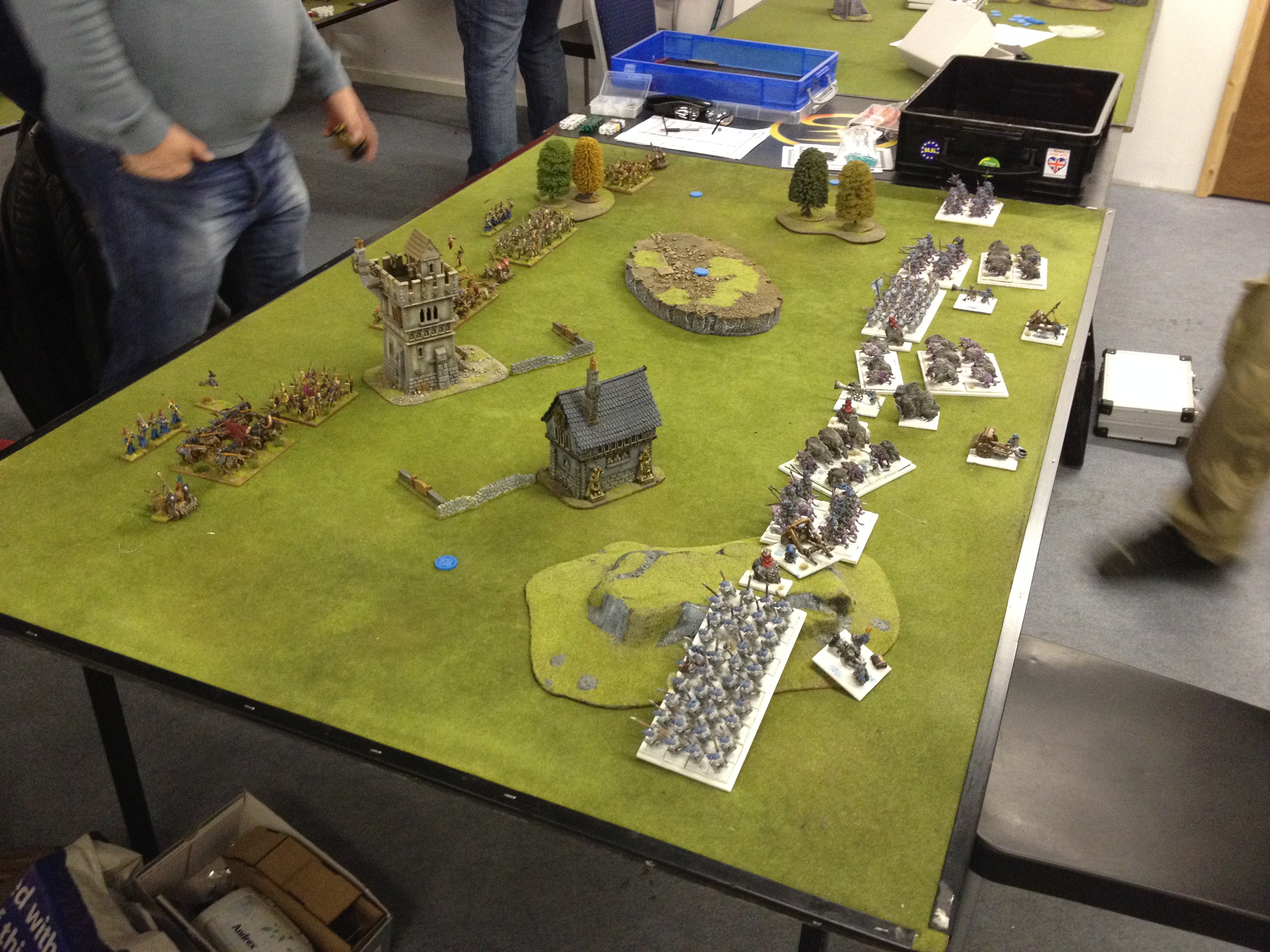 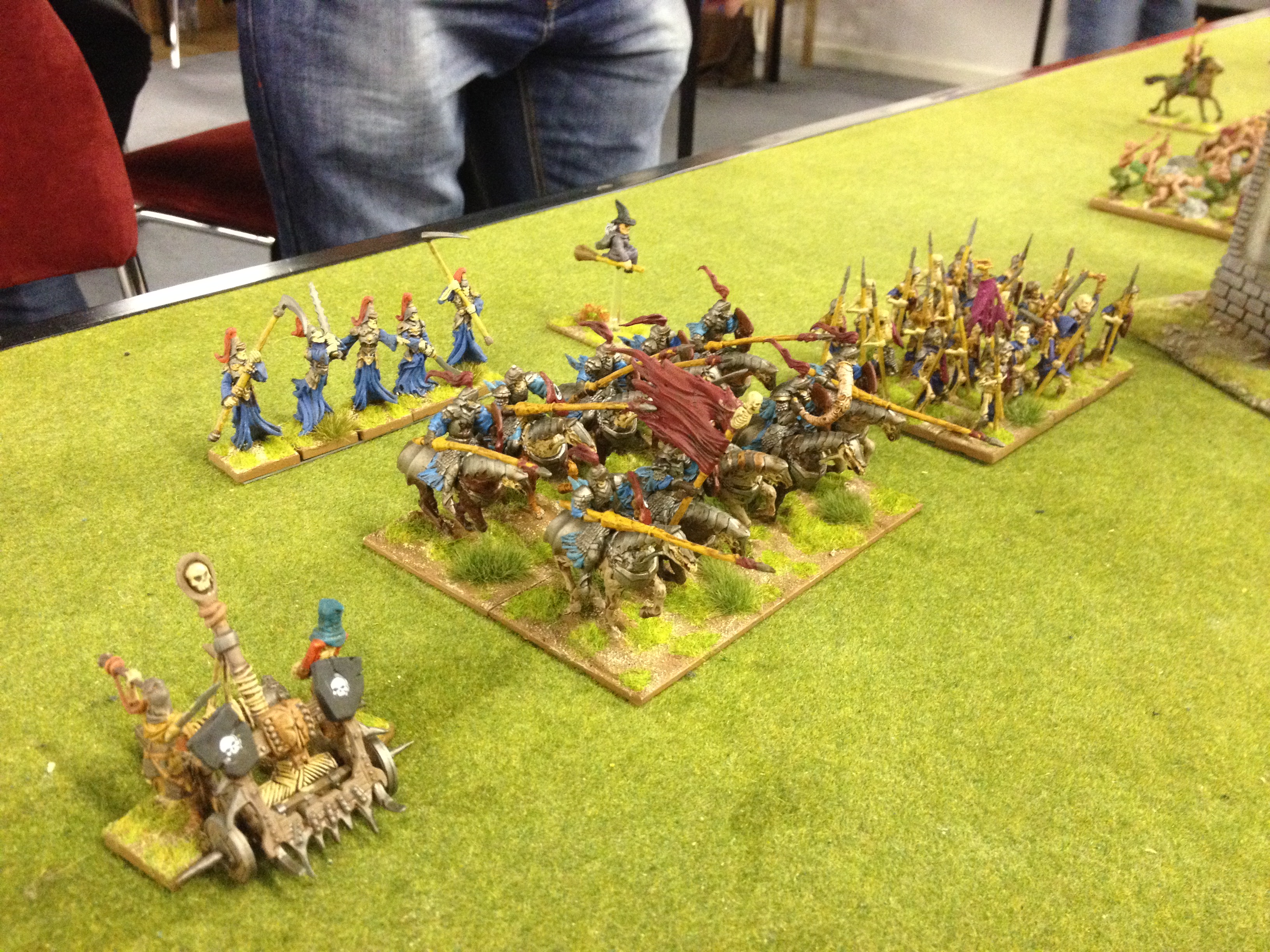 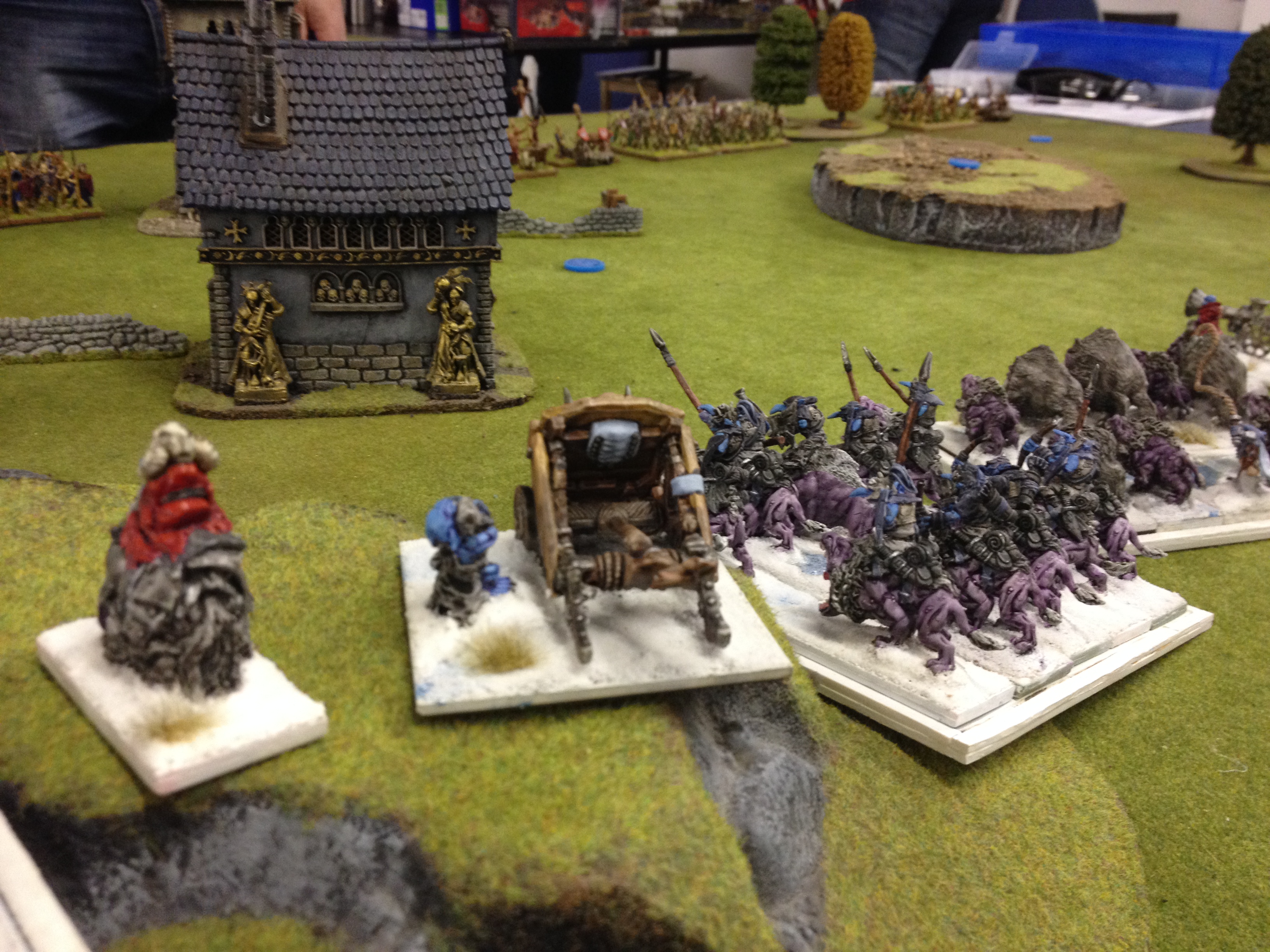 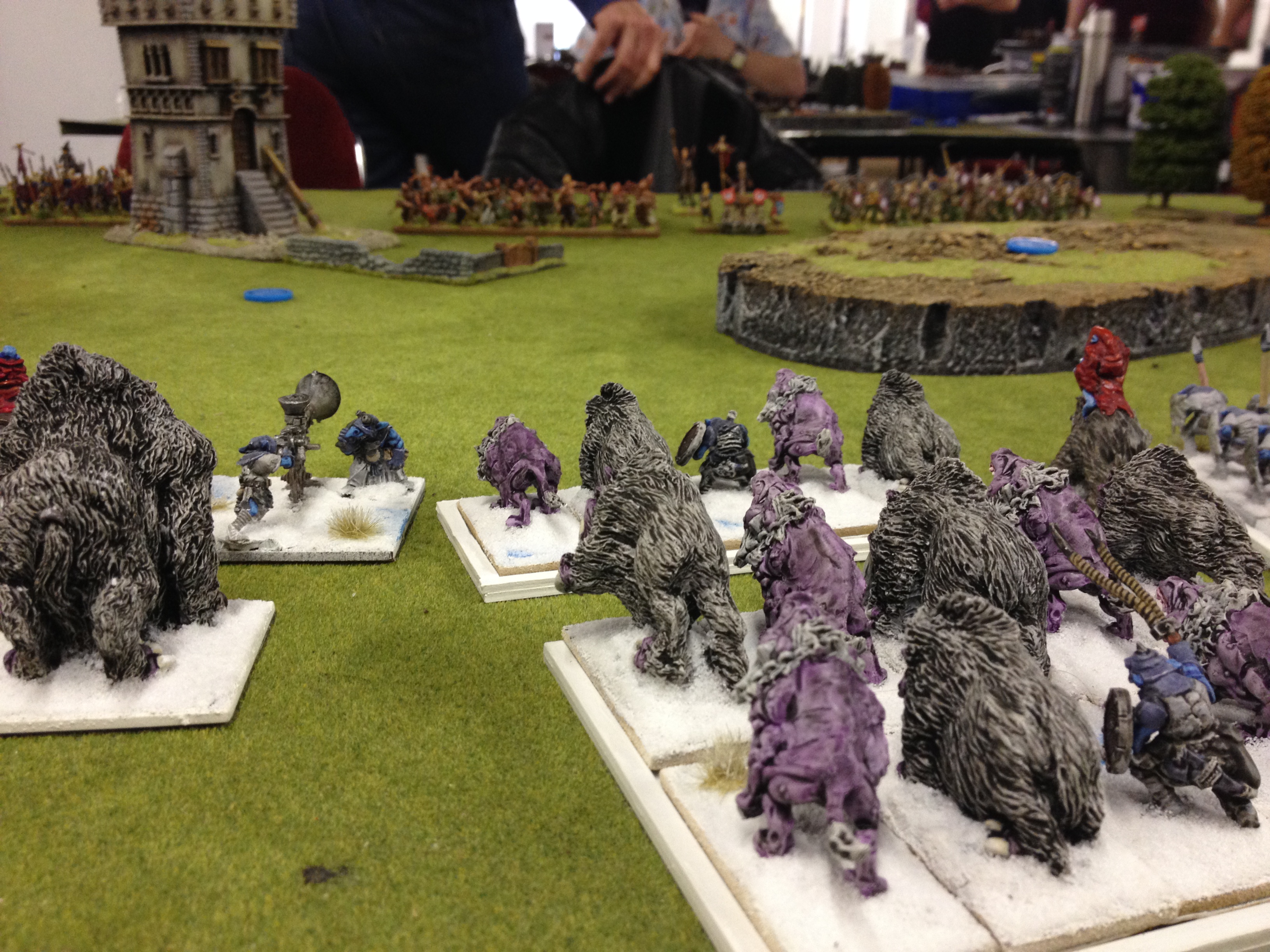 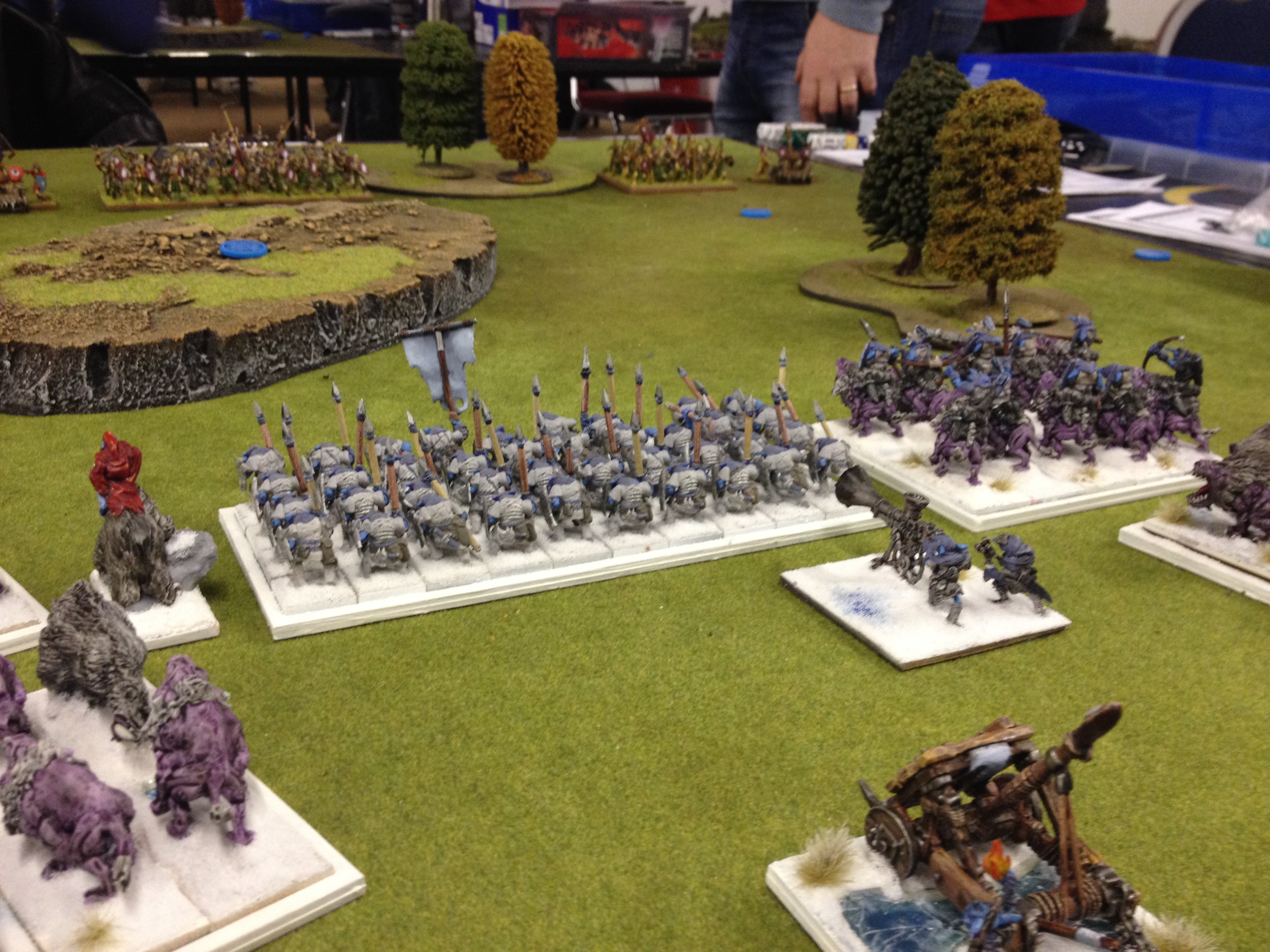 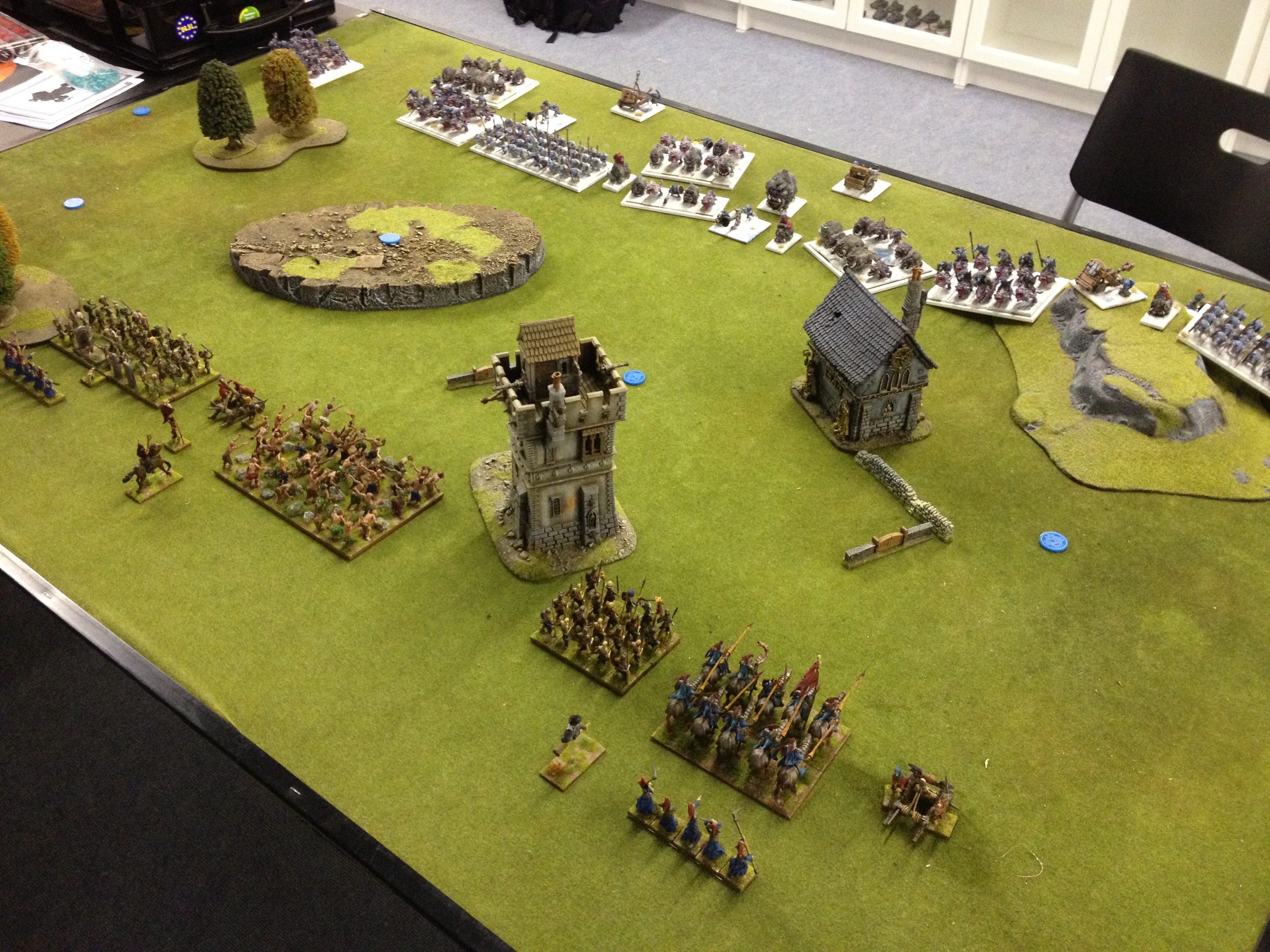 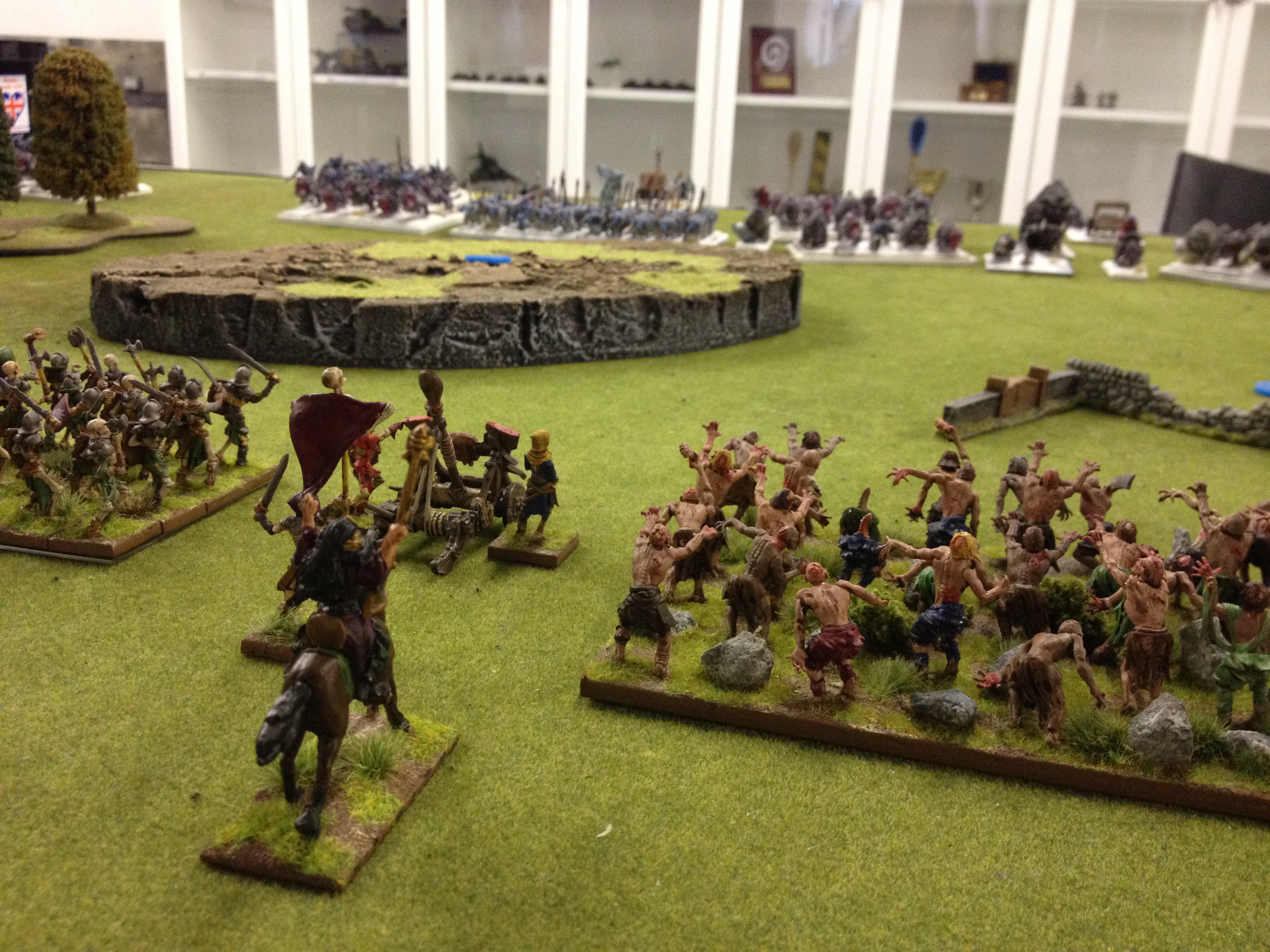 Both players shook hands and rolled for first turn. Stephen rolled a 4 but Chris rolled a 1. Never fear, Chris has a magic item (the Rune Stones) that would allow him to re-roll that…1!! So much for Dwarven Runes! Stephen decided to take the first turn and we started…

Undead all advance forward, all 3 Balefire Catapults miss and only one Zzap was in range but deals no damage.

The Fleabag unit on the inside right charge the Skeletons with spears opposite them, they pass their Utterly Spineless test but suffer a disordered charge as they go through a wood.

Brew of Haste Fleabags push up on the far outside right passed the charging unit to sit right in front of a Balefire Catapult. 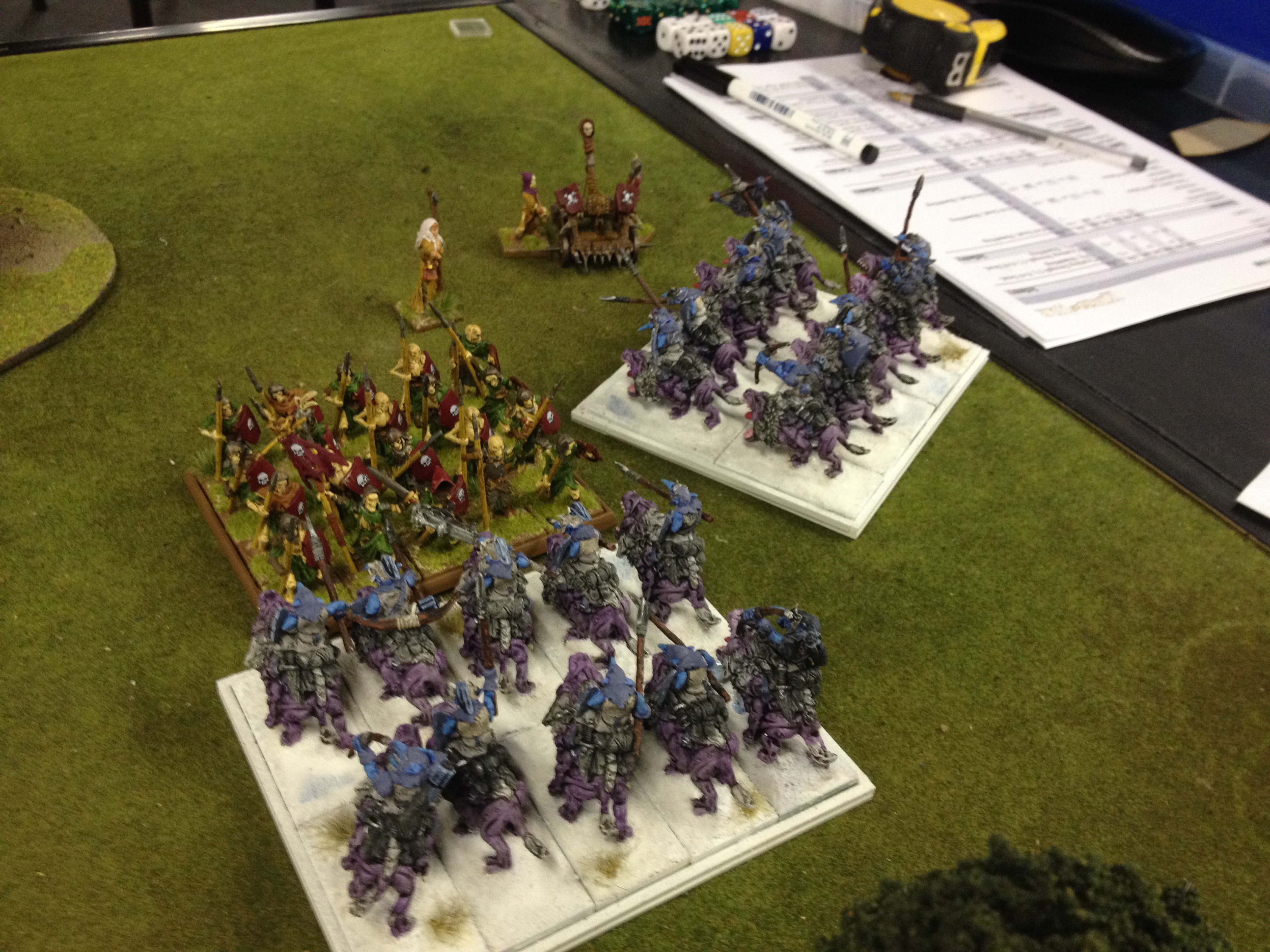 The rest of the Goblin army advances. 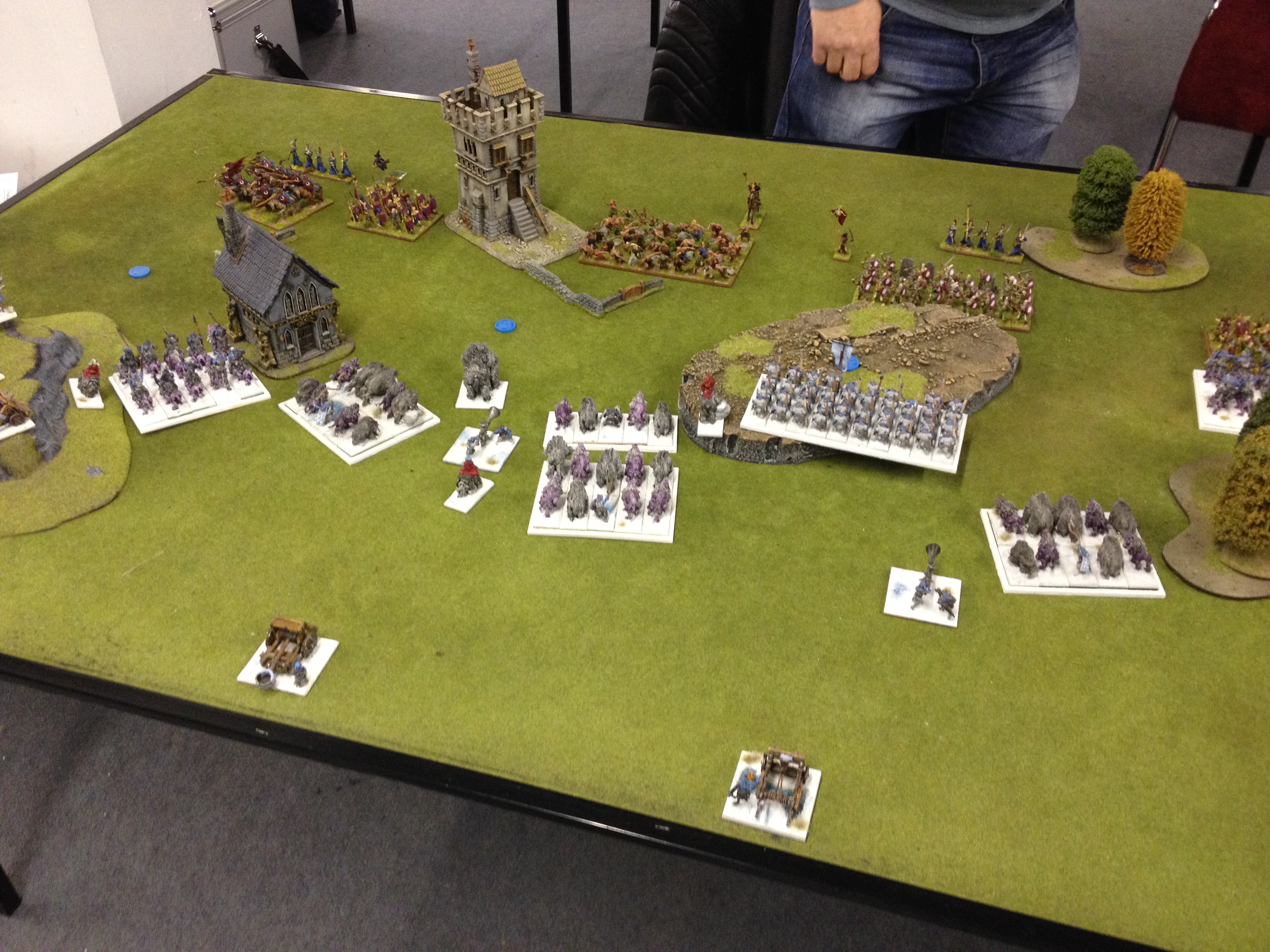 In the shooting phase Chris Zzaps the Balefire in the center doing 3 damage and a Rock Thrower hits the one on his left doing a massive 8 damage!

The nerve test for the zzaped Balefire rolls a 9 which would rout it but the Undead Standard Bearer is close enough that Stephen can force an Inspiring re-roll…10! And the other Balefire needs a double 1 to survive but unfortunately too bites the dust!

Onto combat and the Fleabags need 6’s to hit as their charge was disordered and they are charging a unit with the Phalanx rule (Cavalry and unit’s with fly are at -1 to hit). This results in damage being caused on the Skeletons.

The Revenant Cavalry charge the Goblin horde on the Undead right flank/Goblin left. 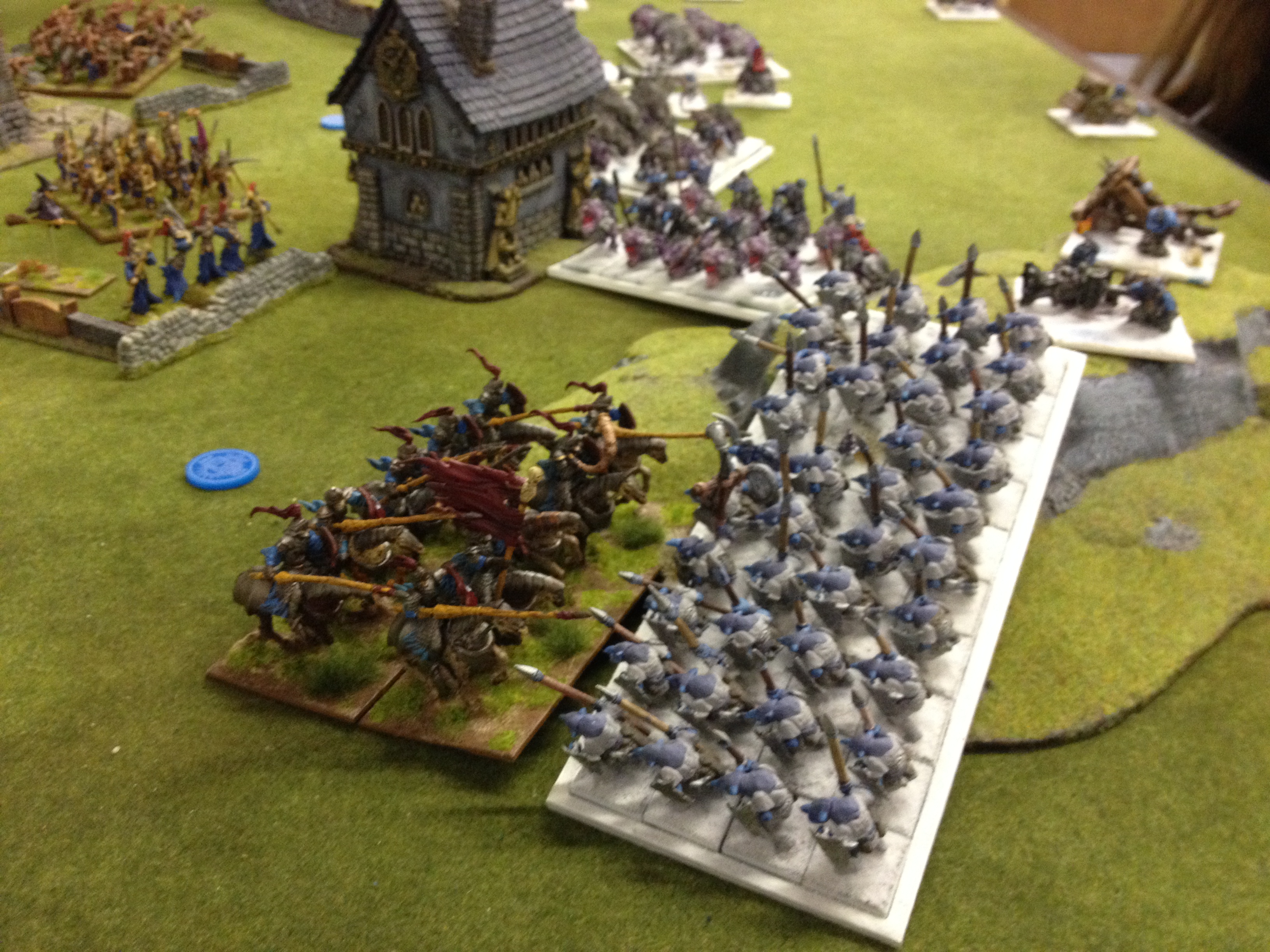 The Skeleton spears counter-charge into the Fleabags that charged them last turn whilst the Skeleton horde charges the Goblin horde in the center. One of the Warith units charge the mawbeast regiment in the center.

In the shooting phase the Necromancer on the far left for the Undead throws a Fireball at the Fleabags with the Brew of Haste doing 7 damage. Stephen rolls a 9 for the Nerve and routs the unit saving the Balefire Catapult next turn.

Moving onto combat the Skeleton Horde from 20 attacks does a massive 2 damage which does nothing to affect the Goblin Horde.

The Revenant Cavalry with the Brew of Strength have 16 attacks but hit on 5’s due to the Goblins having Phalanx, they still manage to do 8 damage. The Nerve test rolls a 4 so no affect.

The Skeleton spears who charged the Fleabags get 15 attacks but only cause 1 damage with no ill effect whilst the Wraiths into the Mawbeast Regiment manage to waiver the dogs of war after doing 3 damage and rolling a 10 on the Nerve check.

The Mawbeast troop in the center rolls a 1 for it’s Utterly Spineless so fails to charge. A regiment moves through them to sit in front on the Zombie Endless Swarm.

The Giant along with the other Mawbeast Regiment (the third wavering at the moment) charge the Skeleton Spears on the Goblin’s left hand side. 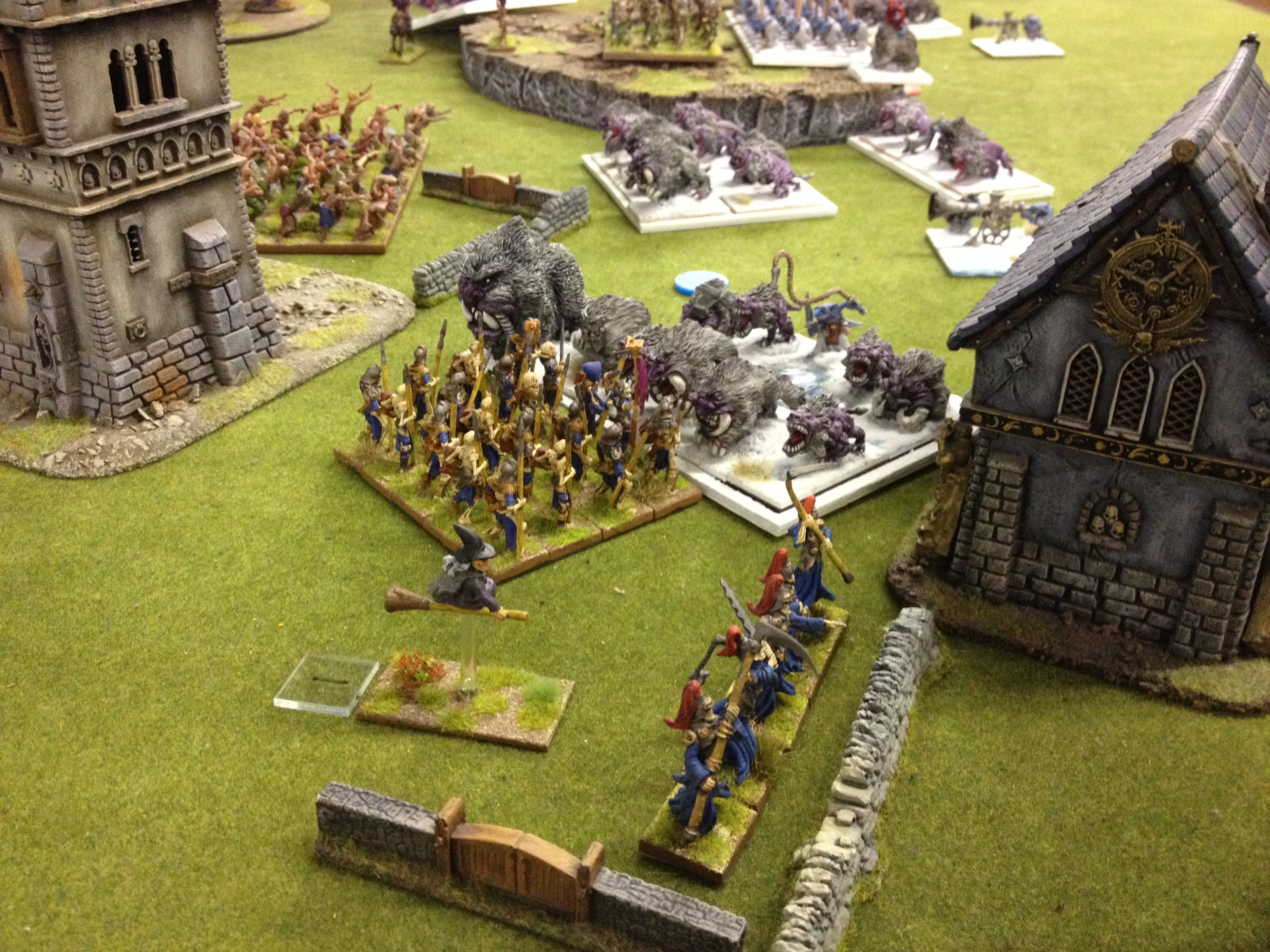 A unit of Fleabag riders pass their Utterly spineless test to Flank charge the Revenants but the 40 Goblins in the Horde fail and instead sit and watch their mounted colleagues fight alone. 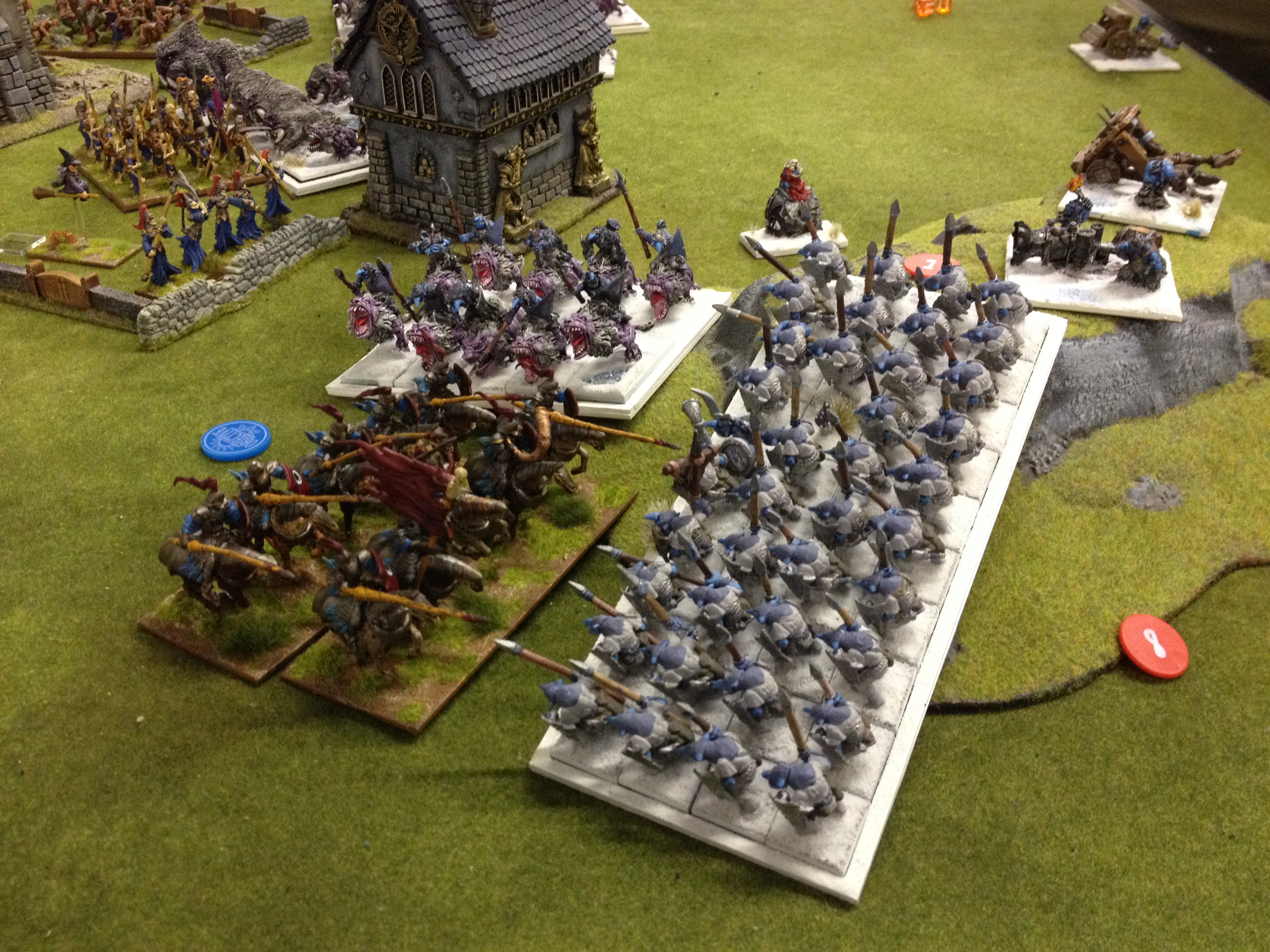 The Fleabags on the right decide to ignore the Skeleton spears and double around the back of the Undead army.

Moving onto the shooting phase 3 Wizz’s gang up on a Necromancer with Zzap’s but only do 5 damage. The resulting Nerve checks rolls a 7 which wavers the Necromancer.

The War-Trombone in the center does 4 damage onto a unit of Wraiths with no further effect and all 3 Rock Throwers miss.

In combat the Giant and Mawbeast regiment do 7 damage onto the Skeleton spears but just miss Routing them by 1 after the dice roll up 9.

The Fleabags flanking the Revenants get double attacks for a Flank Charge giving them 32 attacks! They manage to cause 9 damage on the Undead cavalry and Stephen rolls a 10 for the Nerve check – POP! The Fleabags decide to change facing as their final action. 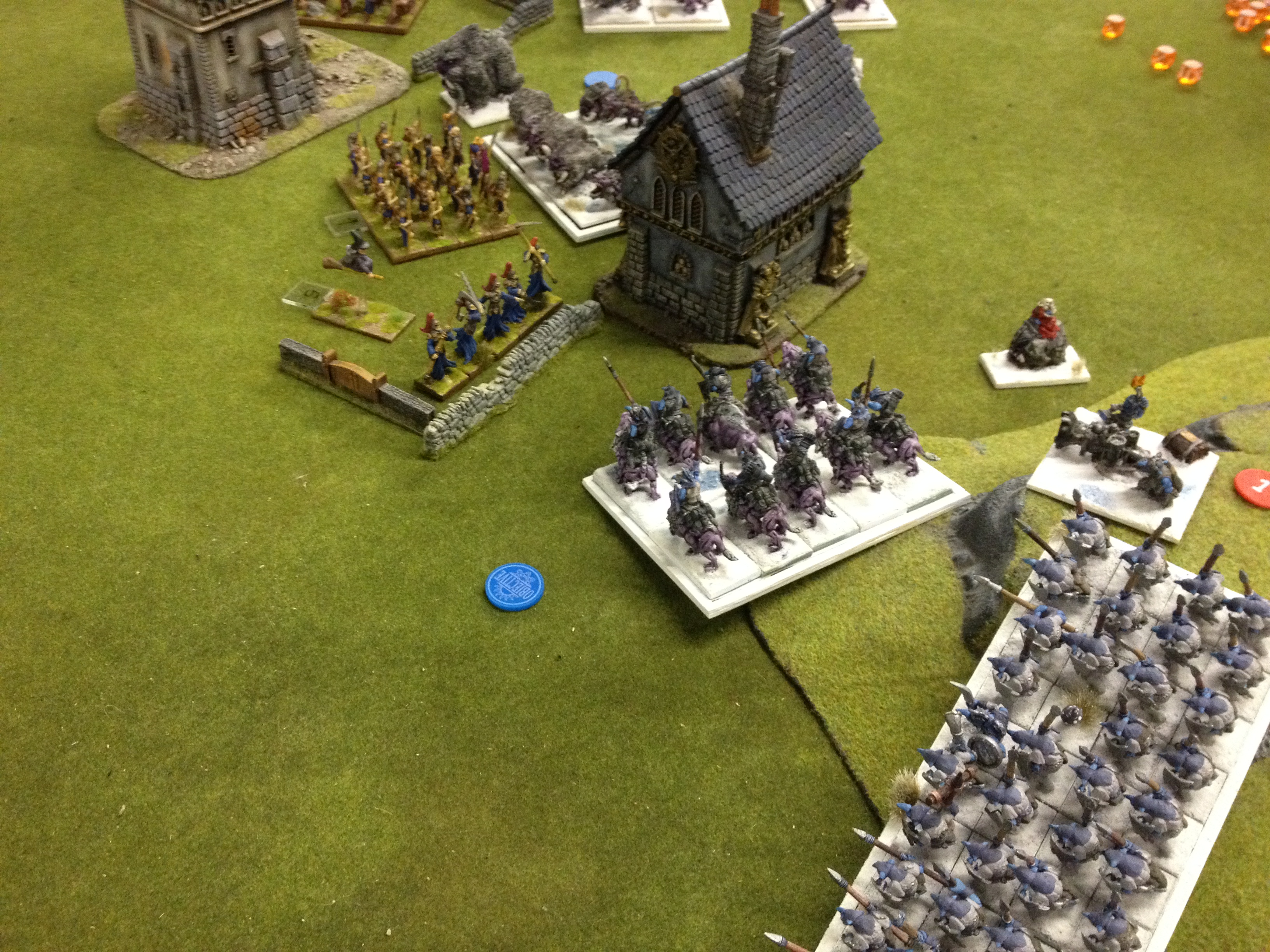 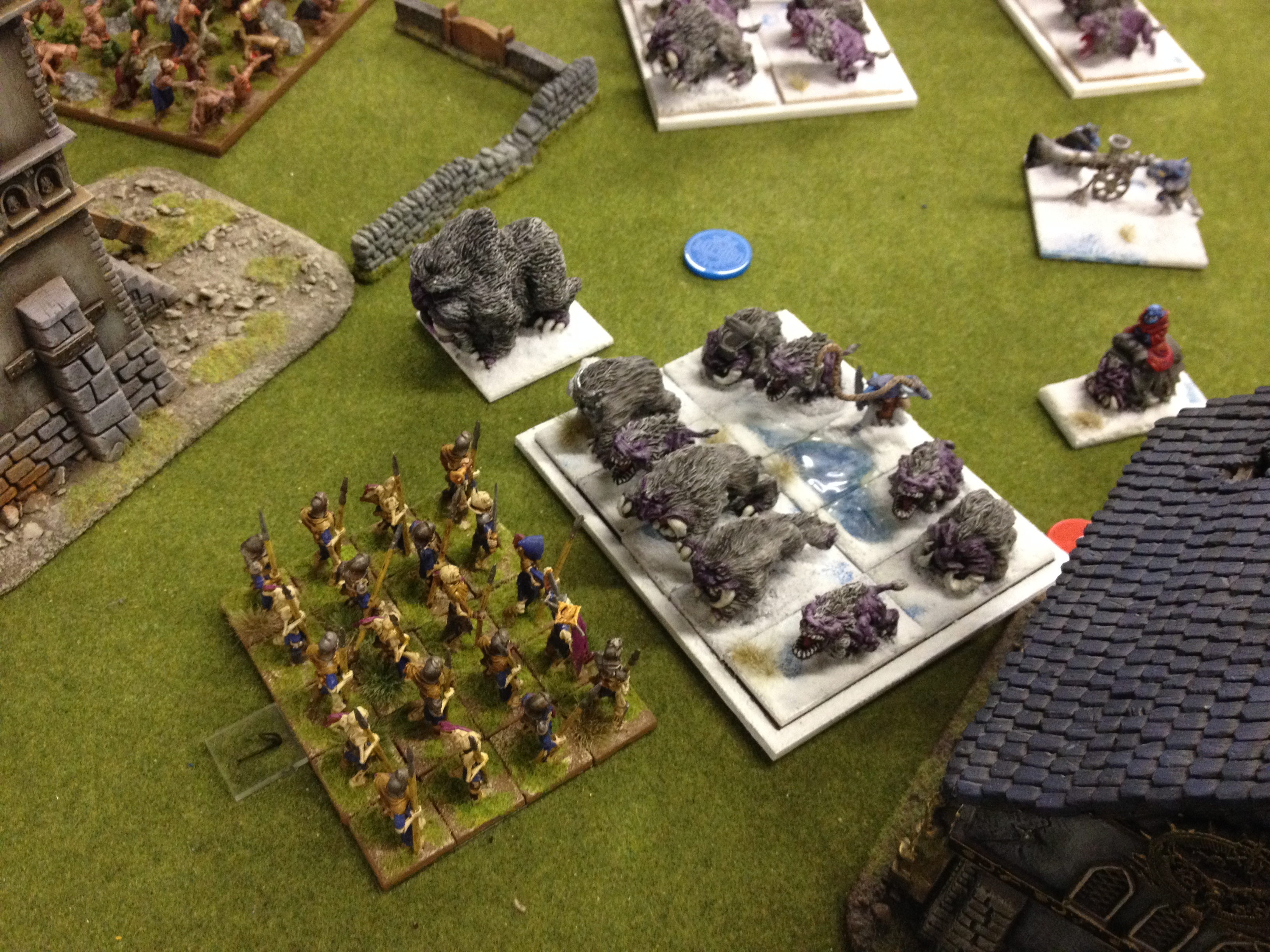 To be continued on Monday…