Tale of a King: Clash of Kings Road Trip Part 10b

The conclusion to the final game on Table 1 at the Welsh Regional. Stephen’s Undead take on Chris’s Goblins – winner takes the Regional Champ title for 2015!

The Skeleton Horde charges into the Goblin Horde in the center and the Skeleton Spears on the Right charge a Mawbeast Regiment. Both Wraith unit’s charge a Rock Thrower each. 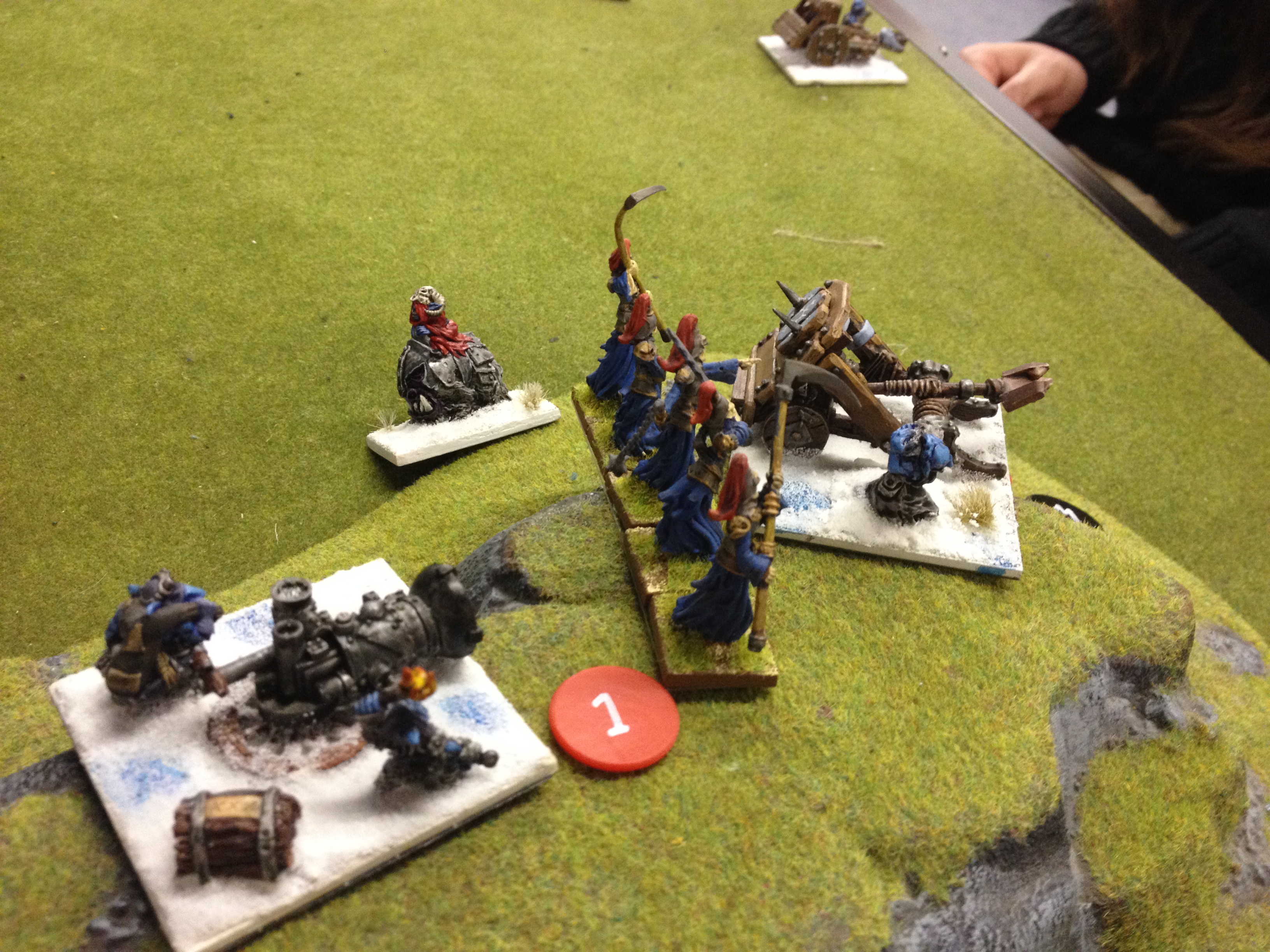 In the shooting phase the remaining Balefire Catapult hits another Mawbeast Regiment but only does 1 point of damage. However a nearby Necromancer throws a Zzap at them doing another 5 points taking them to 8. Stephen only manages to roll double 1 for their Nerve test so they are fine, battered but still in the fight!

The Skeleton spears on the left flank get DARK SURGED into the flank of the Fleabag Regiment trying to run away from them and in the resulting combat phase do another 4 damage to them. The Fleabags survive the resulting Nerve check.

The Skeleton Horde in the center does  another 3 damage to the Goblin Horde but that only puts it onto 5.

Some good news at least for Stephen as the two Wraith unit’s attack their Rock Throwers. The one in the center is Routed whilst the one on the right (on the hill) is wavered).

The Goblin Horde on Chris’s left advances whilst a Fleabag Regiment (the one being chased by the Skeleton Spears) and a Mawbeast Regiment charge into the Zombie Horde.

The War-Trombone’s turn around to turn some attention to the two Troops of Wraiths who are taken on the Goblin Artillery.

Finally the Mawbeast Regiment who just got zzaped look for revenge and charge the Necromancer. 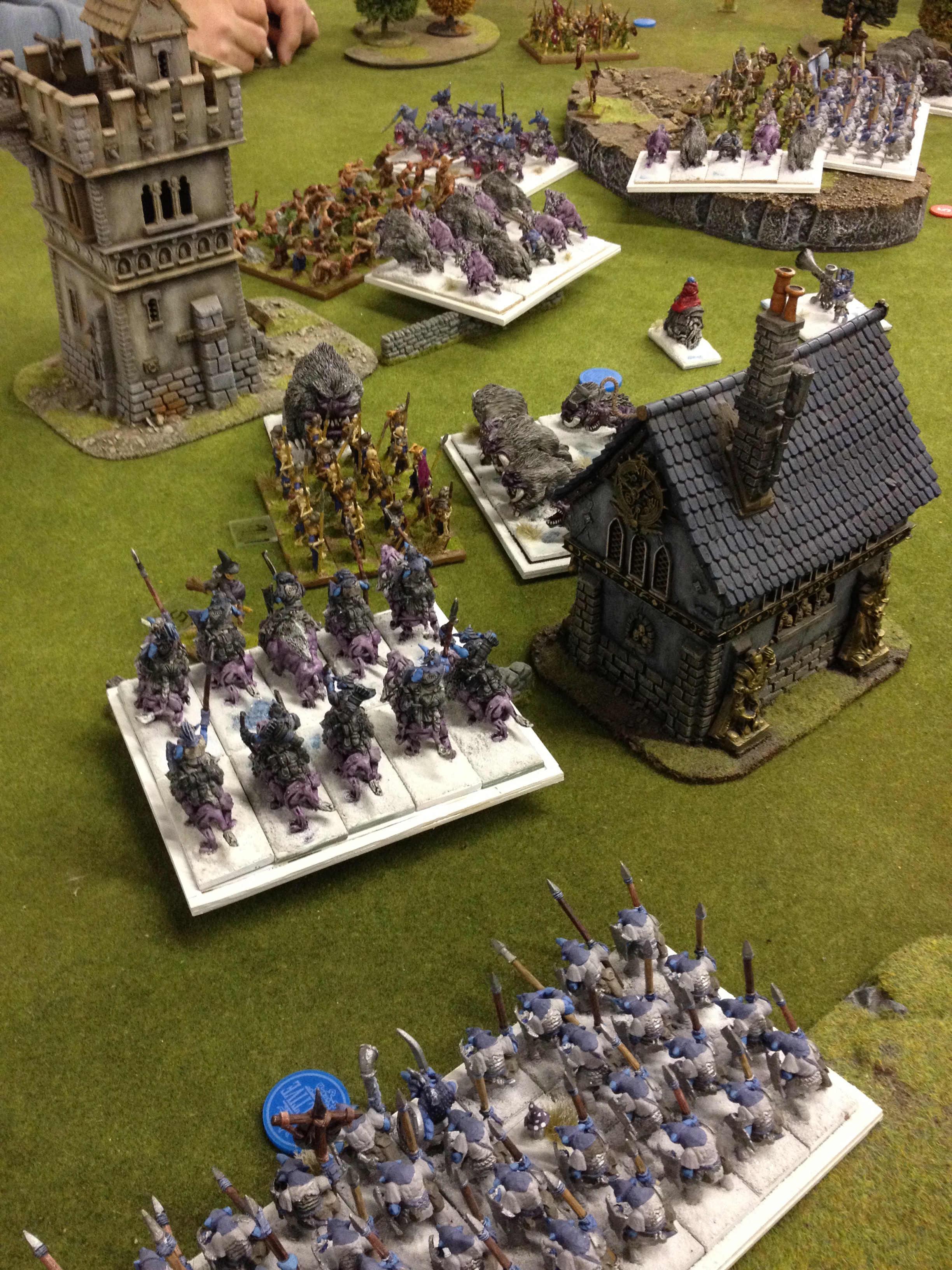 The Wraith unit in the center is blown away by one Trombone and a couple of Zzaps whilst the Wraiths on the hill survive.

The Giant (Mawbeast) does 4 damage into the Skeleton Spear’s Flank putting them on 13, scoring 8 on the dice and are wiped out!

The Necromancer is also killed by the Mawbeast Regiment whilst the Fleabags and Mawbeasts engaged with the Zombie Endless Swarm do 19 damage. This would be more than enough to kill most unit’s but Chris rolled double 1 for the Zombie’s Nerve Test and the unit survives for at least another turn. 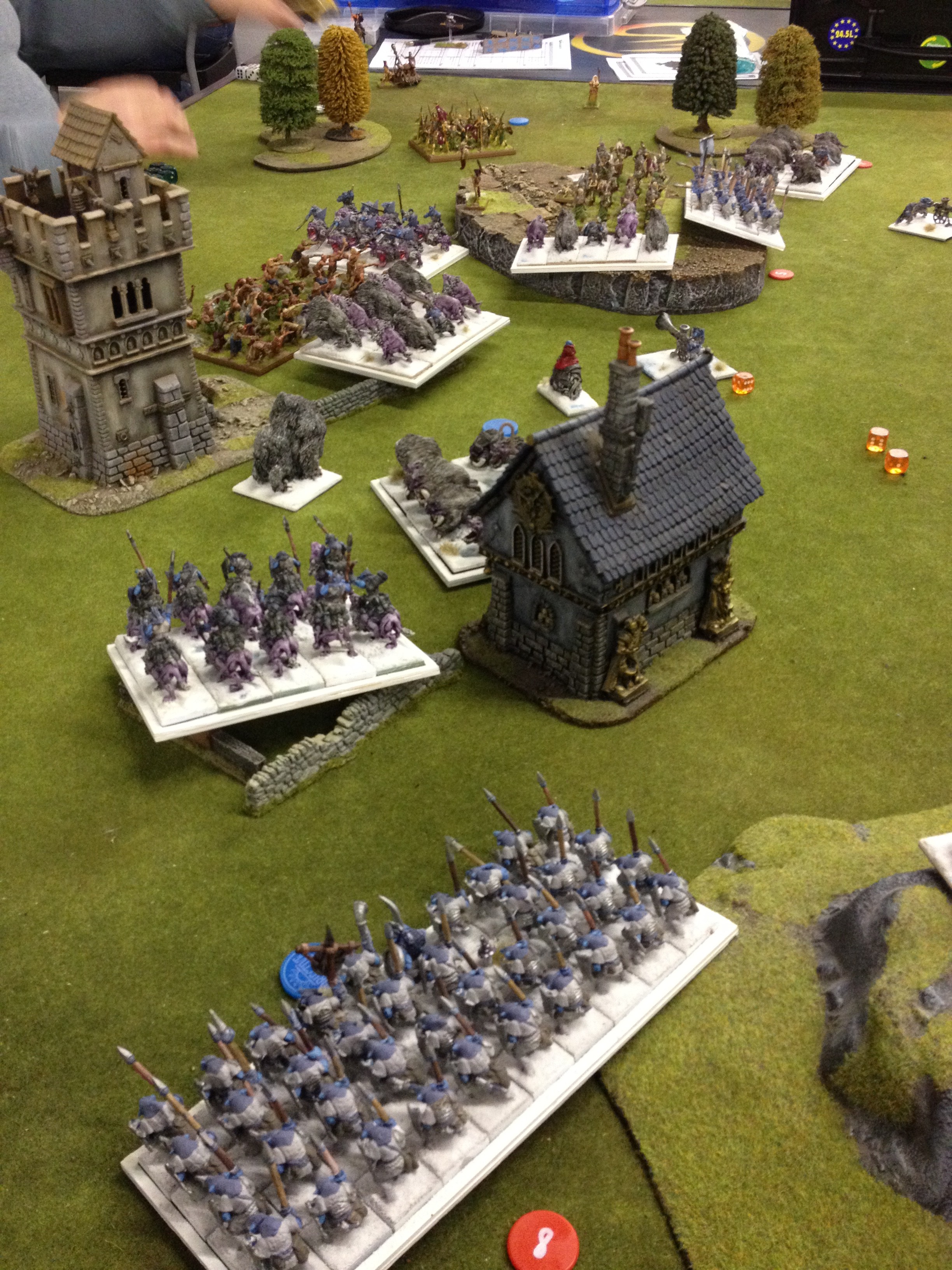 At the mid-point of the game things are not looking good for the Undead. They are not putting enough damage out and are starting to lose unit’s. As we move into Turn 4 the Undead go first. Can they come back from the dead…. again?

The Skeleton Spears on the Undead left charge the Fleabags who they’ve been chasing in the rear. The Zombie Endless Swarm goes into the Mawbeast Regiment whilst the Skeleton Regiment goes back into the central Goblin Horde. 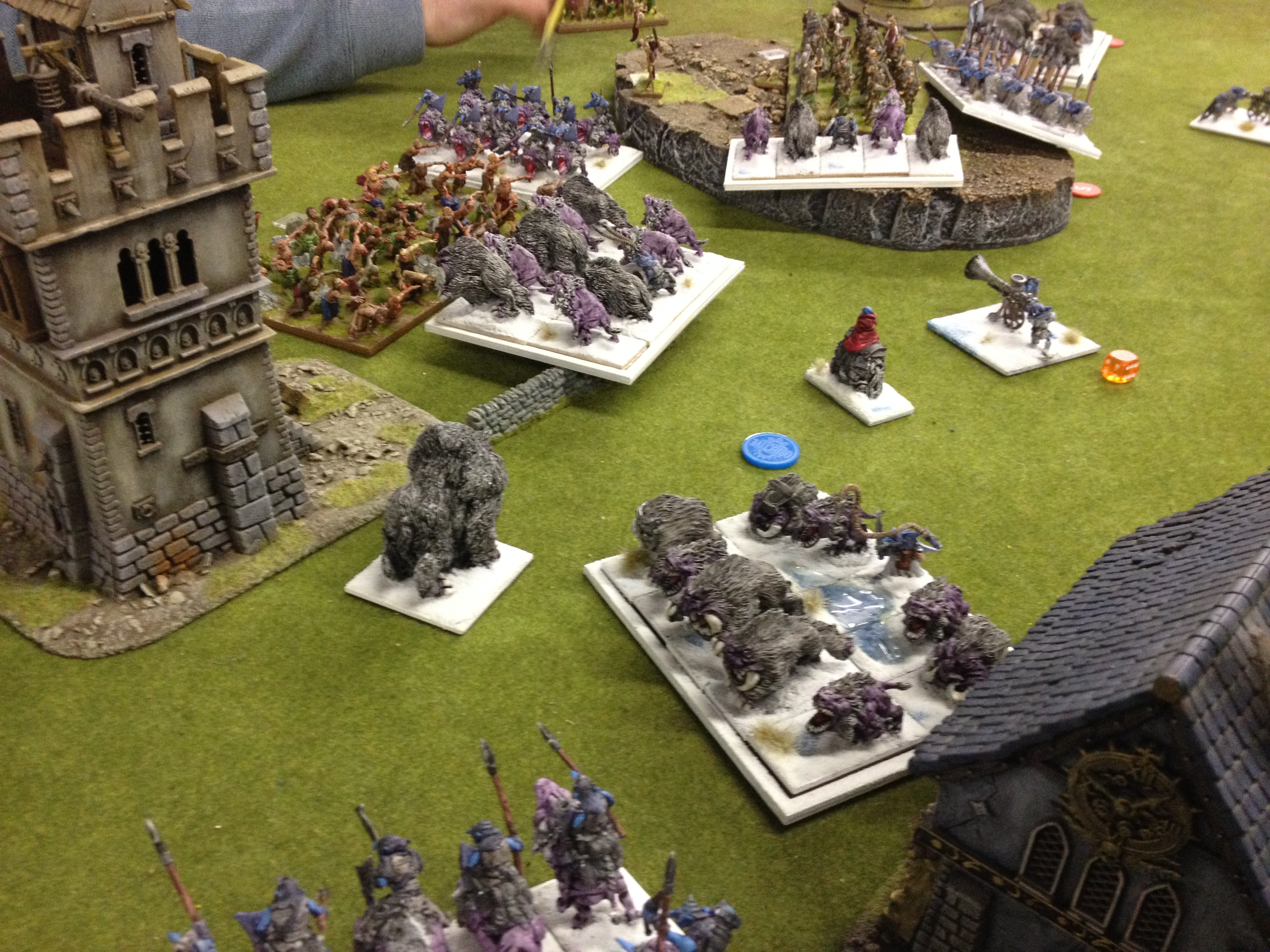 The remaining Wraith Troop goes back into the Rock Thrower on the hill . 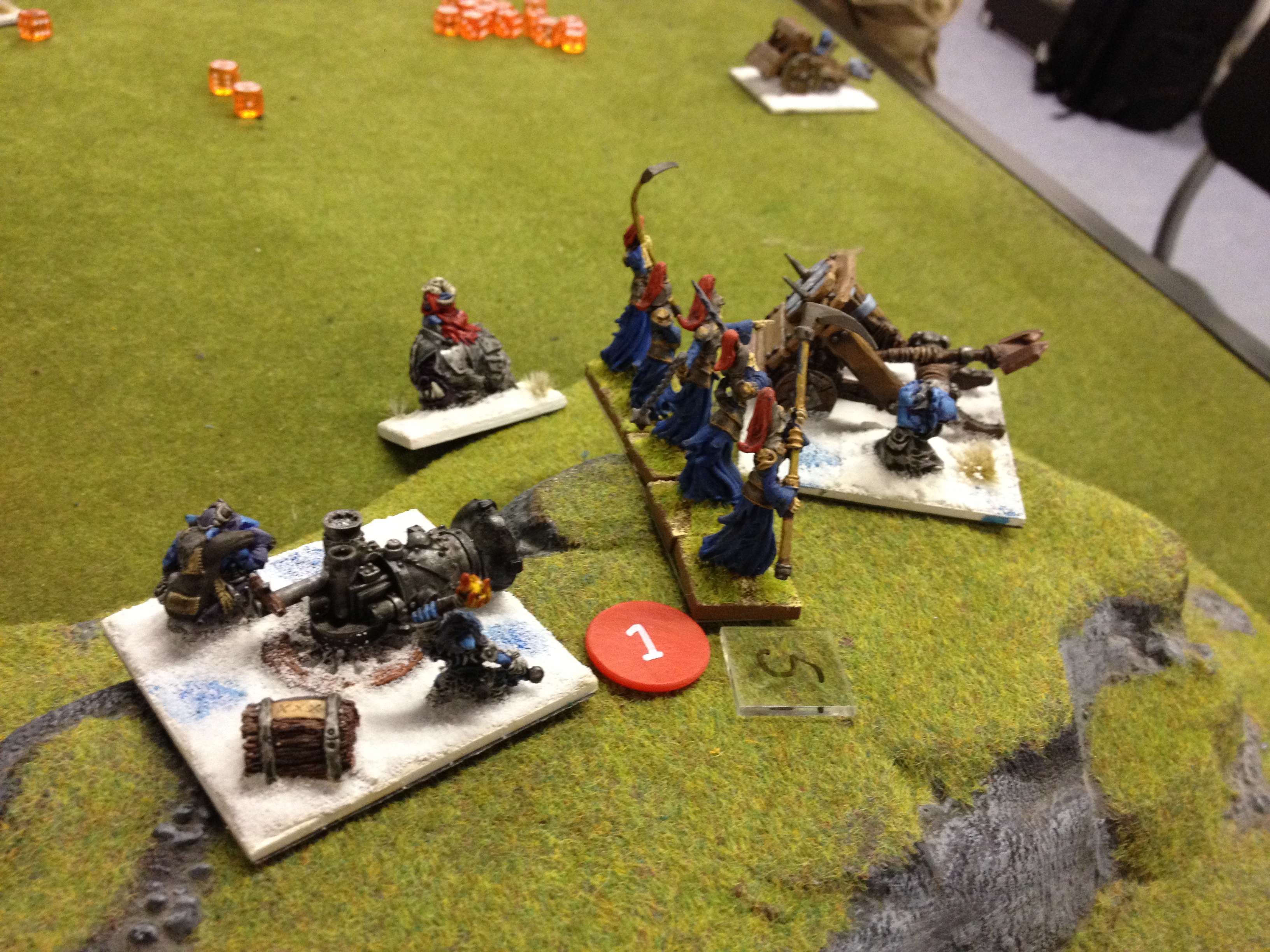 The last Balefire fires at and hits the Mawbeast Regiment who have just run down a Necromancer destroying them and one of the Trombone’s in the center needs some inspiring to survive so long ranged Zzaps from the remaining Necromancer. 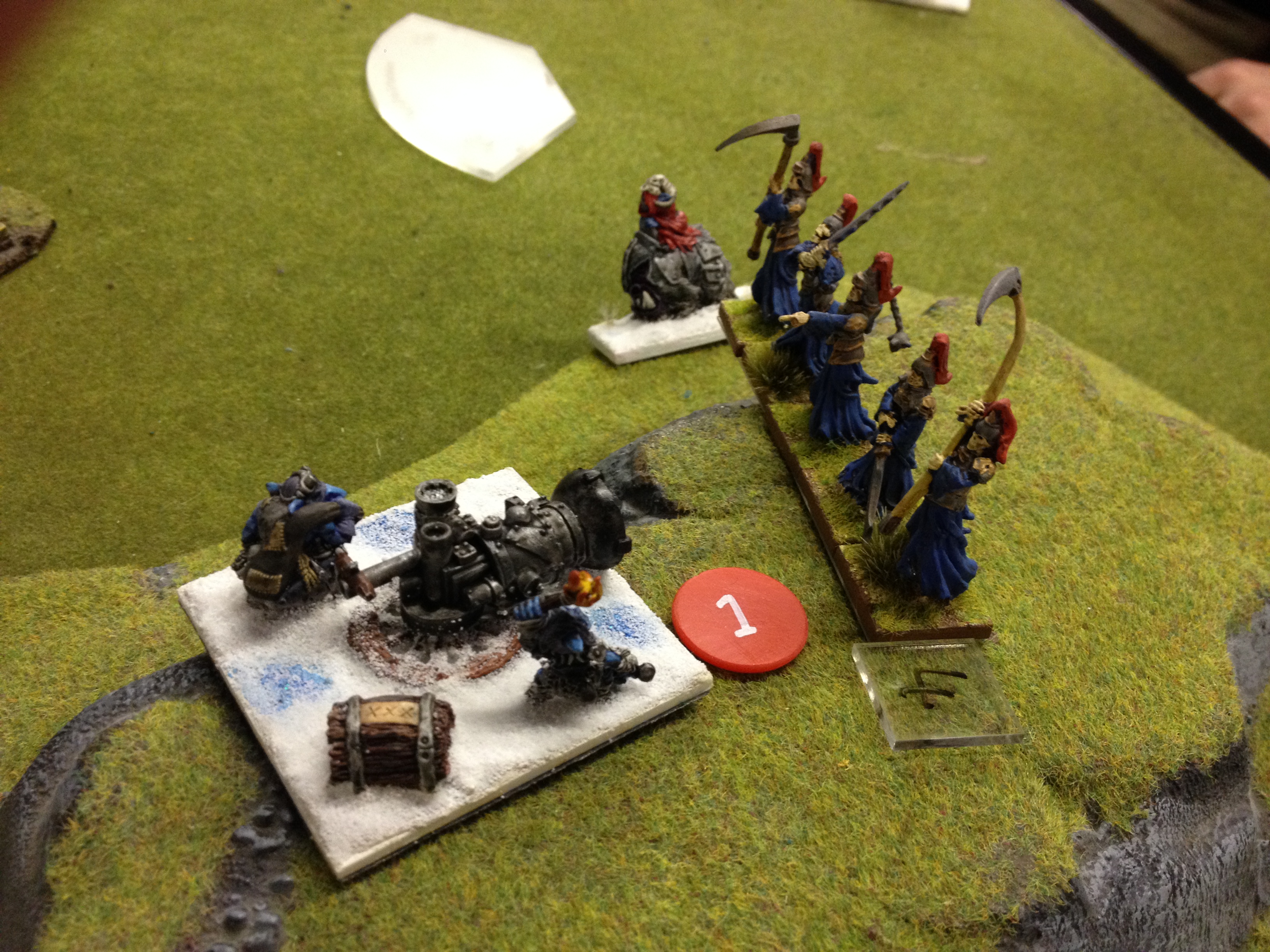 the Skeleton Spears charging the Fleabags in the rear do 8 damage killing them but the Skeleton Horde score ZERO damage against the Goblin Horde! Over 3 rounds of combat that’s 5 damage from 60 attacks that hit on 5’s and damage on 4+! Not a good showing from the Undead Horde!! On average we should be looking at 10 damage! Needless to say the Goblin Horde passes it’s Nerve check and get ready to finish off the Skeletons.

The Endless swarm does another 3 damage onto the Mawbeast Regiment but a low Nerve check roll seems them hold as well. 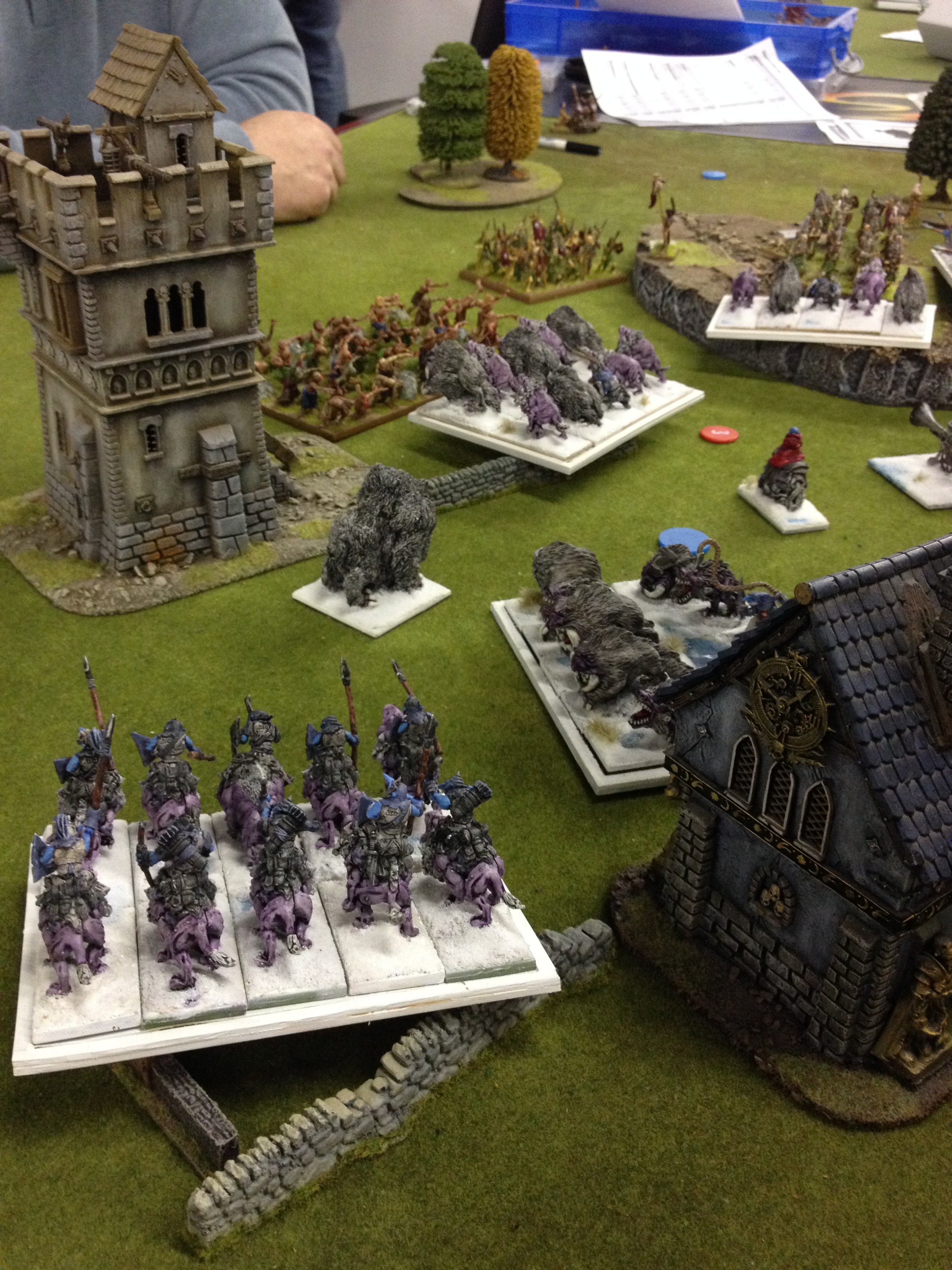 The Fleabags on the left Flank try to charge around the tower but fail their Utterly Spineless check. The Giant (Mawbeast) and Mawbeast Regiment charge into the Endless Swarm. The Goblin Horde in the center charges back into the Skeleton Horde with the Mawbeast Troop flanking.

Things are looking rather bleak for the Forces of the Undead!

Stephen is left with 1 Balefire on his left, and 1 Army Standard Bearer with a Skeleton Spear Regiment in the center. 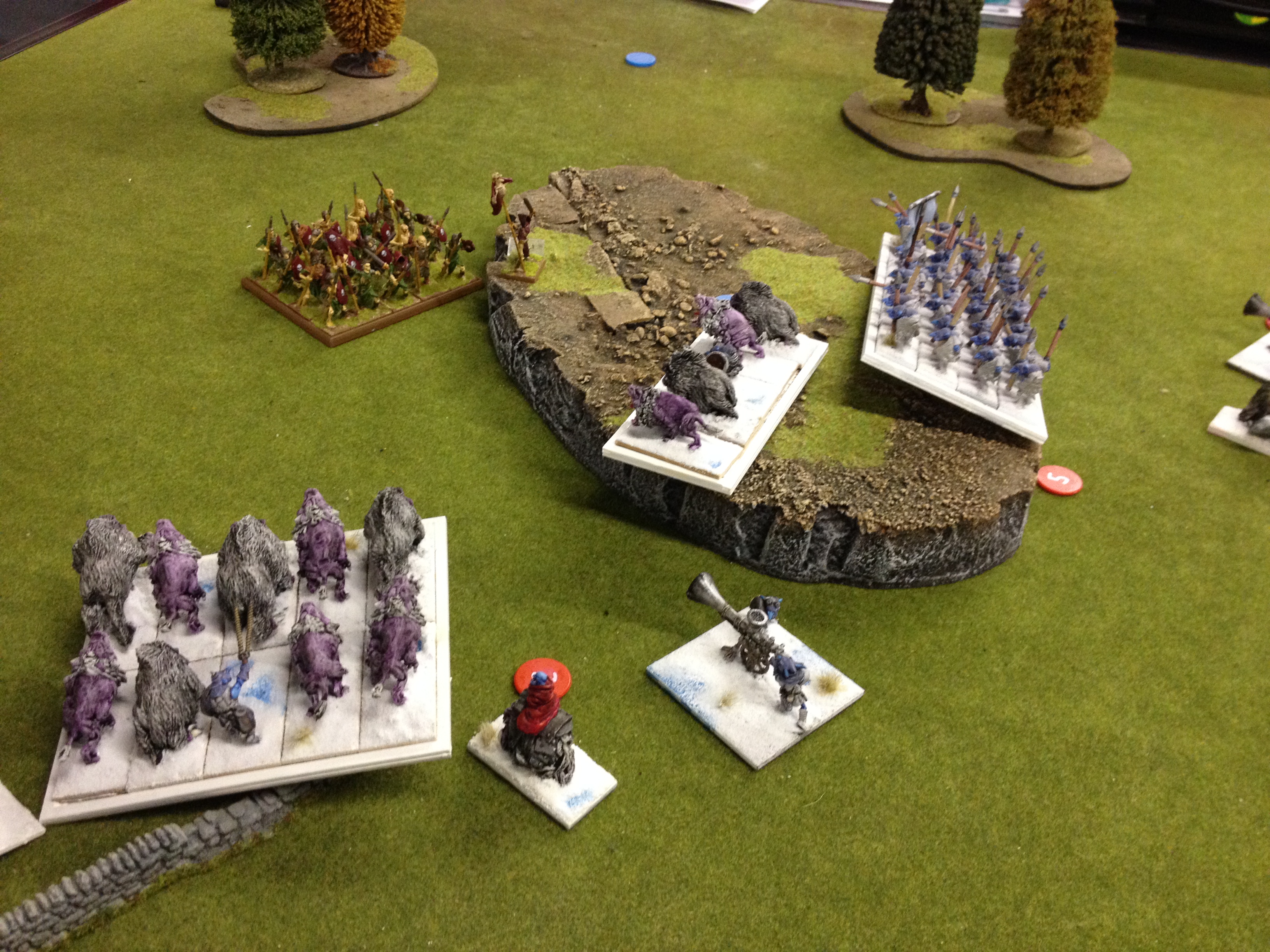 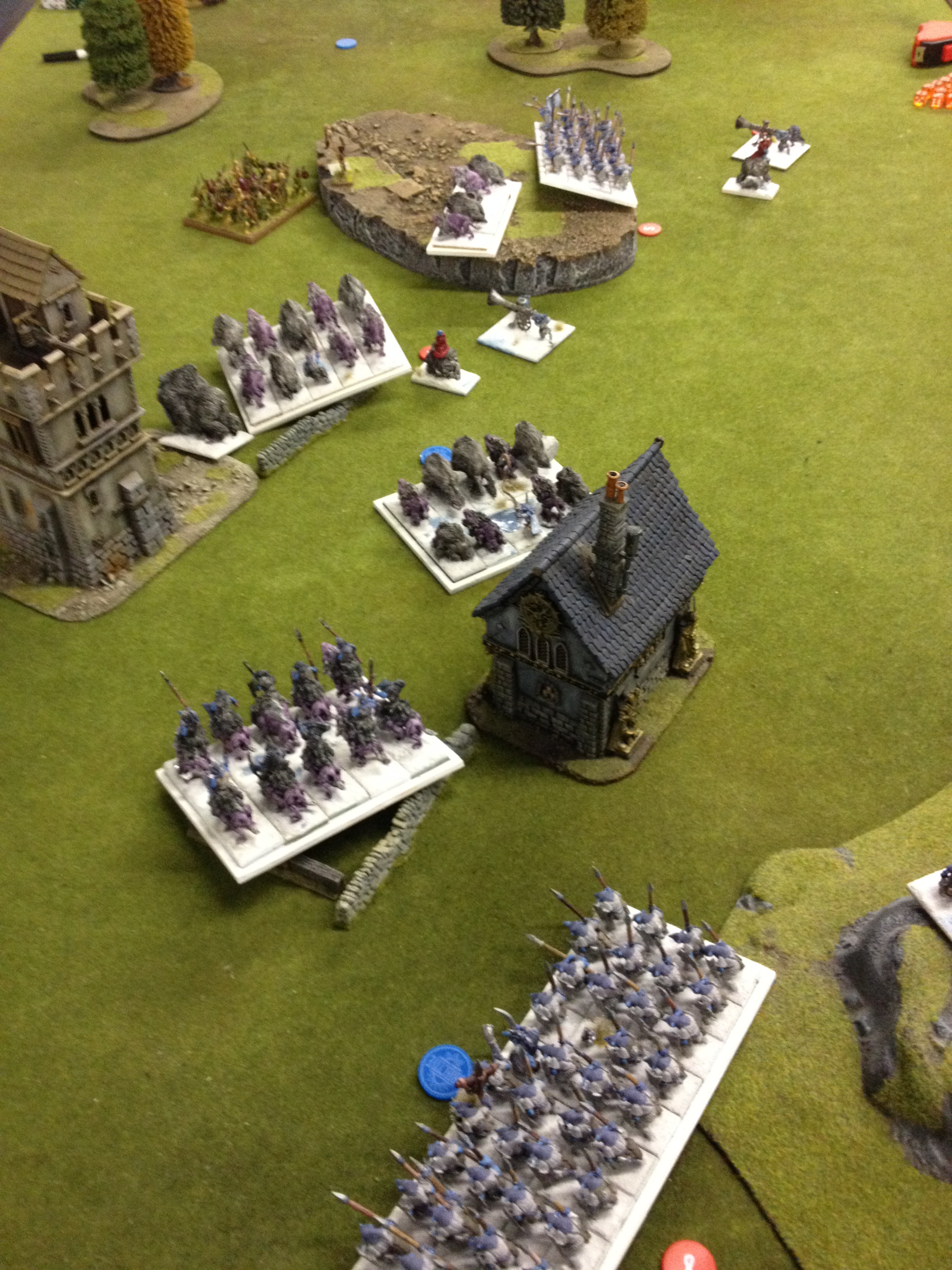 The Standard Bearer charges the Mawbeast Regiment whilst the Skeletons charge the Mawbeast Troop. Neither do significant damage.

The Balefire however locks in and drops a shot on the Goblin Horde in the center causing 9 damage from 10 hits. This puts the horde on 14 damage. Stephen rolls for nerve – 9 – this would kill the unit so Chris asks Stephen to re-roll as the . Chris is hoping for a 6 or less to keep the unit on the table. Stephen rolls the dice – 7! The Horde is dead! The Balefire did more damage in one shot than the Skeleton’s did in 3 rounds of combat!!

The two Wiz’s on the right try to Zzap at the Balefire doing 1 damage between them, Chris’s last remaining Rock Thrower, having just seen what catapult’s can do decides to hit the Balefire doing 9 hits and 7 damage. This puts the Undead Warmachine out of the game.

The Mawbeast Regiment charge the Standard bearer doing 5 damage but he survives thankfully being inspiring to himself!

Whilst a Trombone manages to be in range for a Breath attack on the Skeleton Regiment – 20 attacks do 10 damage! They survive for one more turn at least…

Possibly the last turn of the game…

The Skeleton Spear Regiment charges the Mawbeast Troop wavering them and the Standard goes back into the Regiment doing nothing.

The Mawbeast Troop being wavered can’t do anything of use so Chris decides to use all three Wiz’s to Zzap, both Trombones and the remaining Rock Thrower to shoot at the Skeleton Regiment. 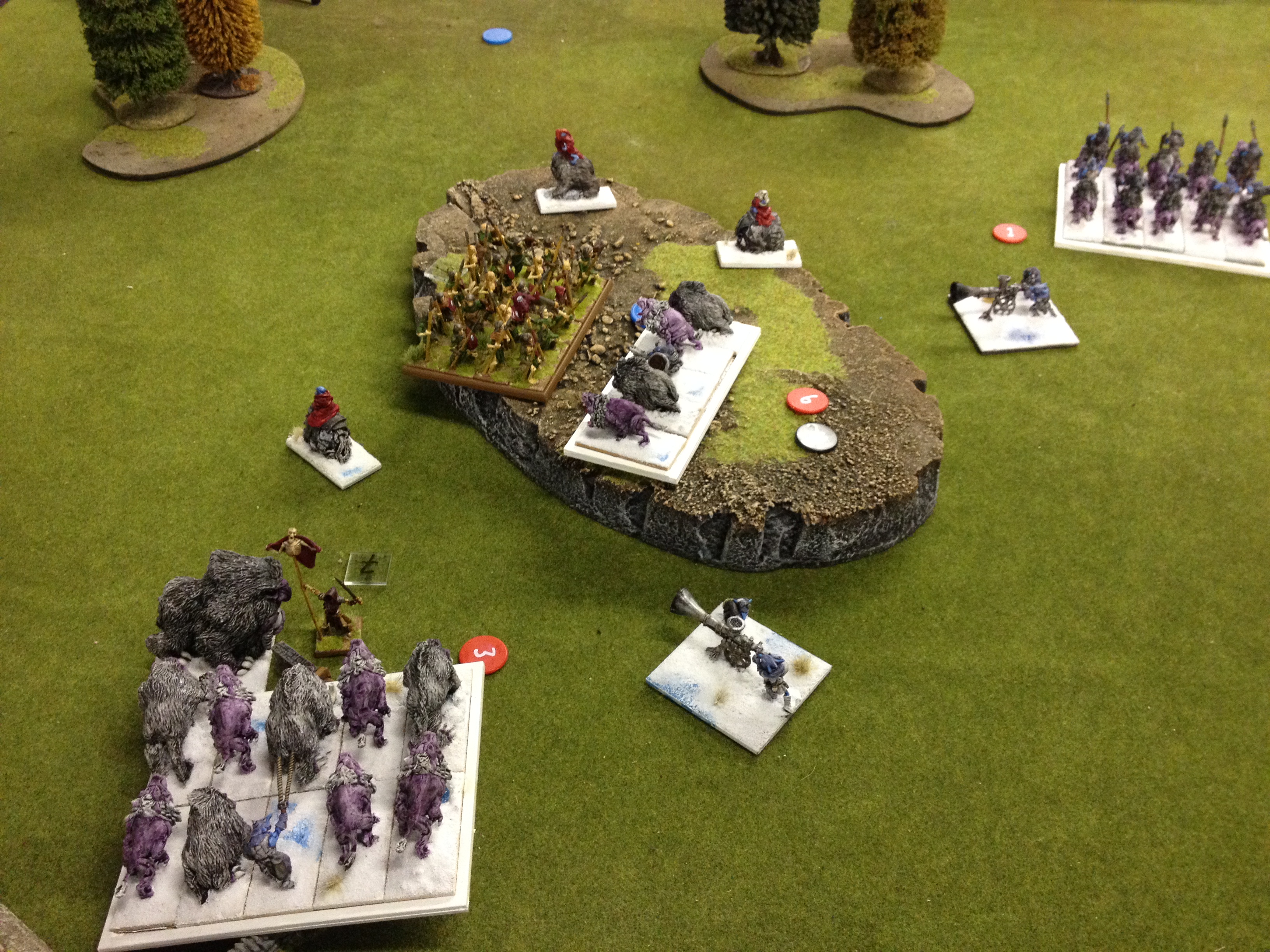 Combined they add another 10 damage putting the Skeleton’s on 19 damage, this is now over their nerve value of -/16 so only a double 1 from the Nerve test can save them – 5.

The Giant (Mawbeast) makes the charge in but is Disrupted through terrain, the Mawbeast Regiment fails it’s Utterly spineless leaving their larger cousen to do all the work.

The Giant rolls 2D6 for it’s attacks and scores 6. He is however hitting on 5’s being disrupted and only does 3 damage. This leaves the Standard on 10 damage with a Nerve value of -/12. Only a ‘Hold your ground!’ can save him now… 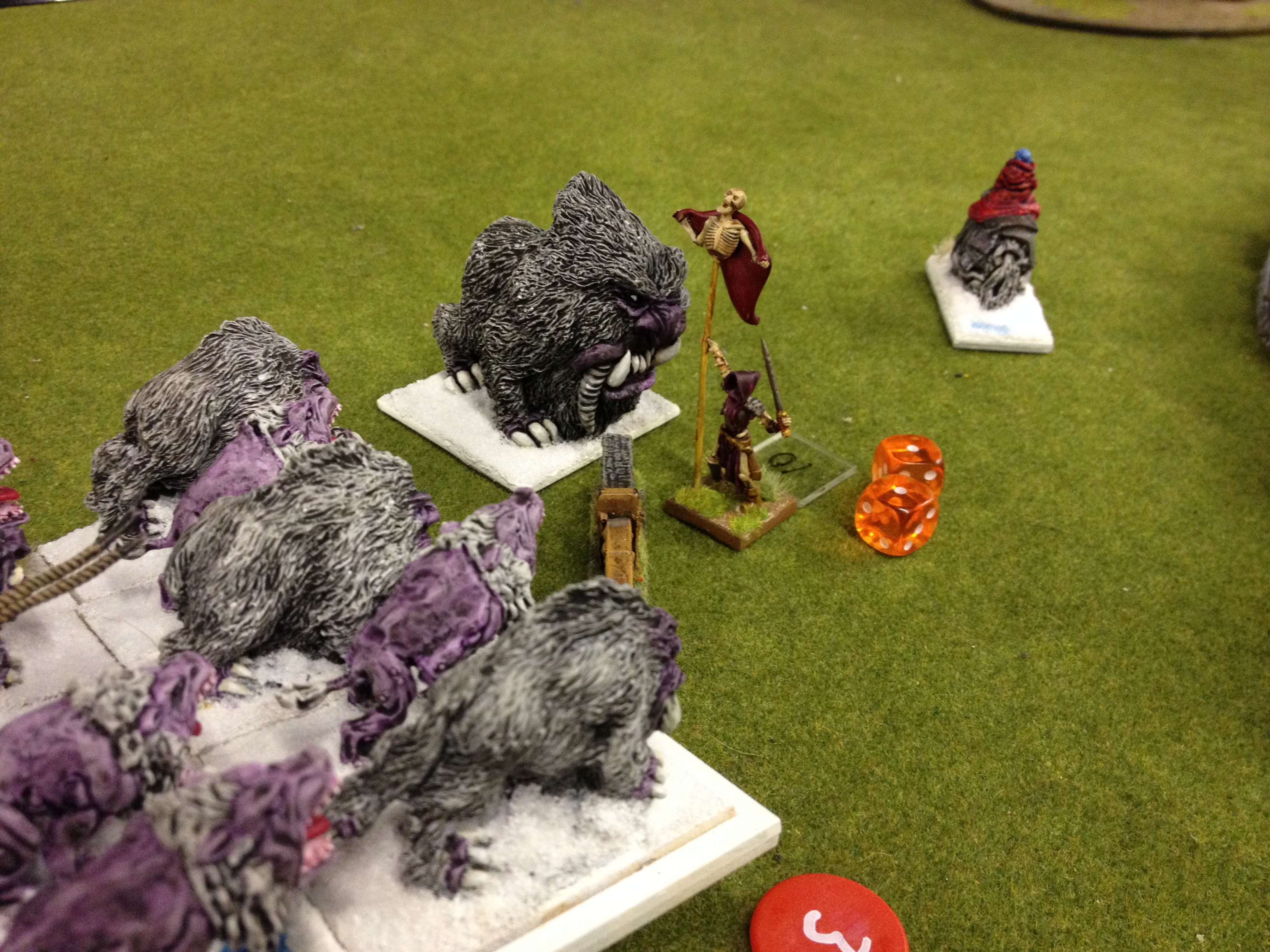 He lives…. or at least survives in this Undead case!

With both players completing their 6th turn the all important dice roll to see if the game continues into another turn. On a 4+ we play a Turn 7, Stephen rolls and we get.. a 2!

The game ends with Stephen’s lone Standard Bearer legging it from the field of battle chased by packs of hungry mawbeasts but it hasn’t been a complete rout! 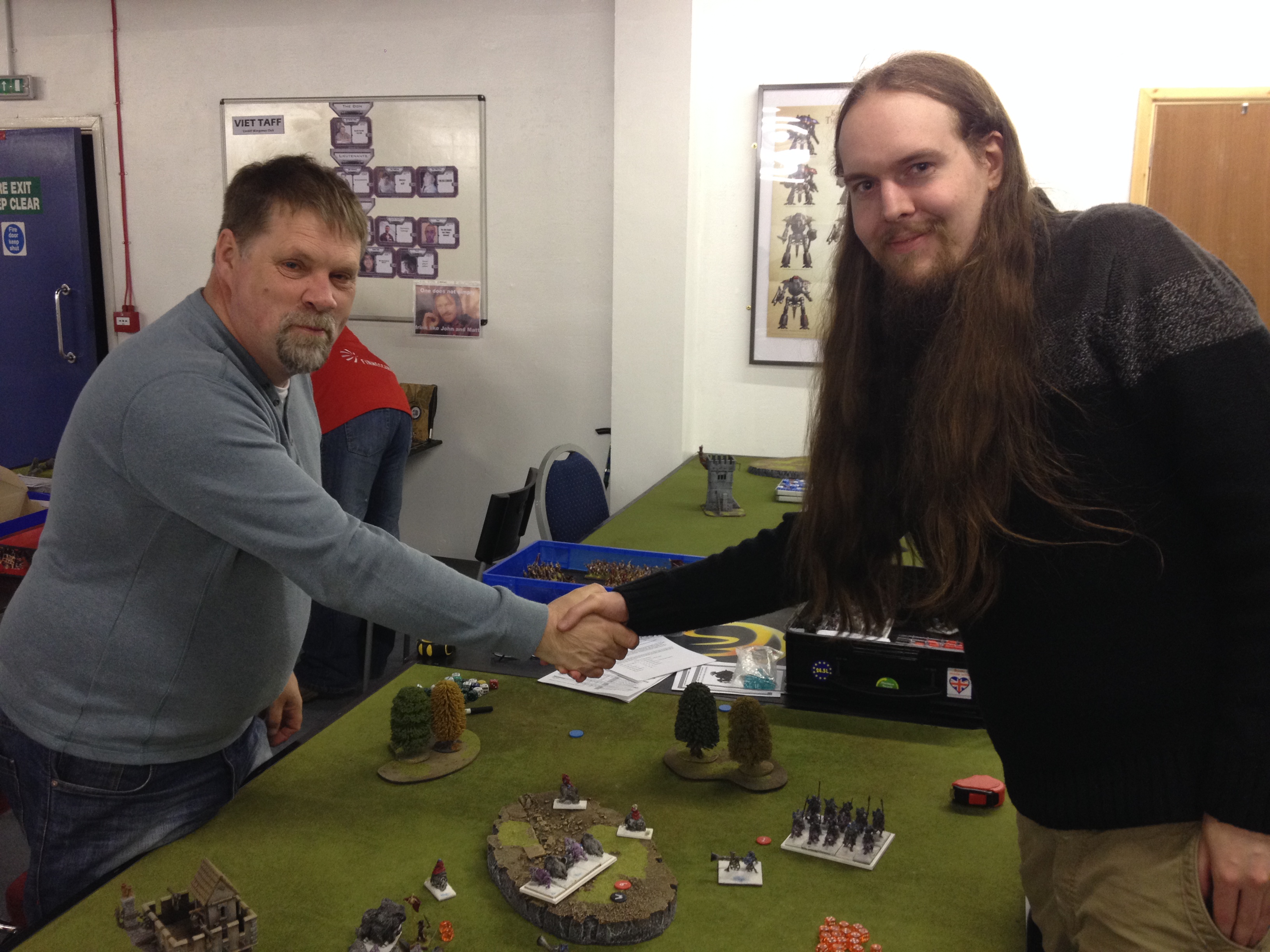 After shaking hands and congratulating each other on a well fought game the players totted up the scores.

It was pretty clear Chris won the game and took 15 tournament points but the margin of victory was still unclear and was worth an additional 1-5 Tournament points.

Stephen had killed 575pts of Chris’s army meaning the difference was +1000pts to Chris and a bonus of 3pts to his Tournament score.

(I have just noticed they handed in the result as 17:3 but this wouldn’t have affected the final standings)

Congratulations to Chris and we look forward to seeing him at the National Final in October along with the other Regional Champs and anyone else who fancies the challenge.

Next stop for the Tale of a King Roadtrip?

We have a month now till Brighton which is already looking to be another well attended Clash of Kings Regional. Tickets are still available and more details can be found HERE!

Oh and it’s SALUTE this weekend, I had volunteered to demo Kings of War which I have now been told needs to be 2nd Edition… so I have a few nights of brushing up on the changes so if you are down on Saturday pop along to the Mantic demo area and say hello! 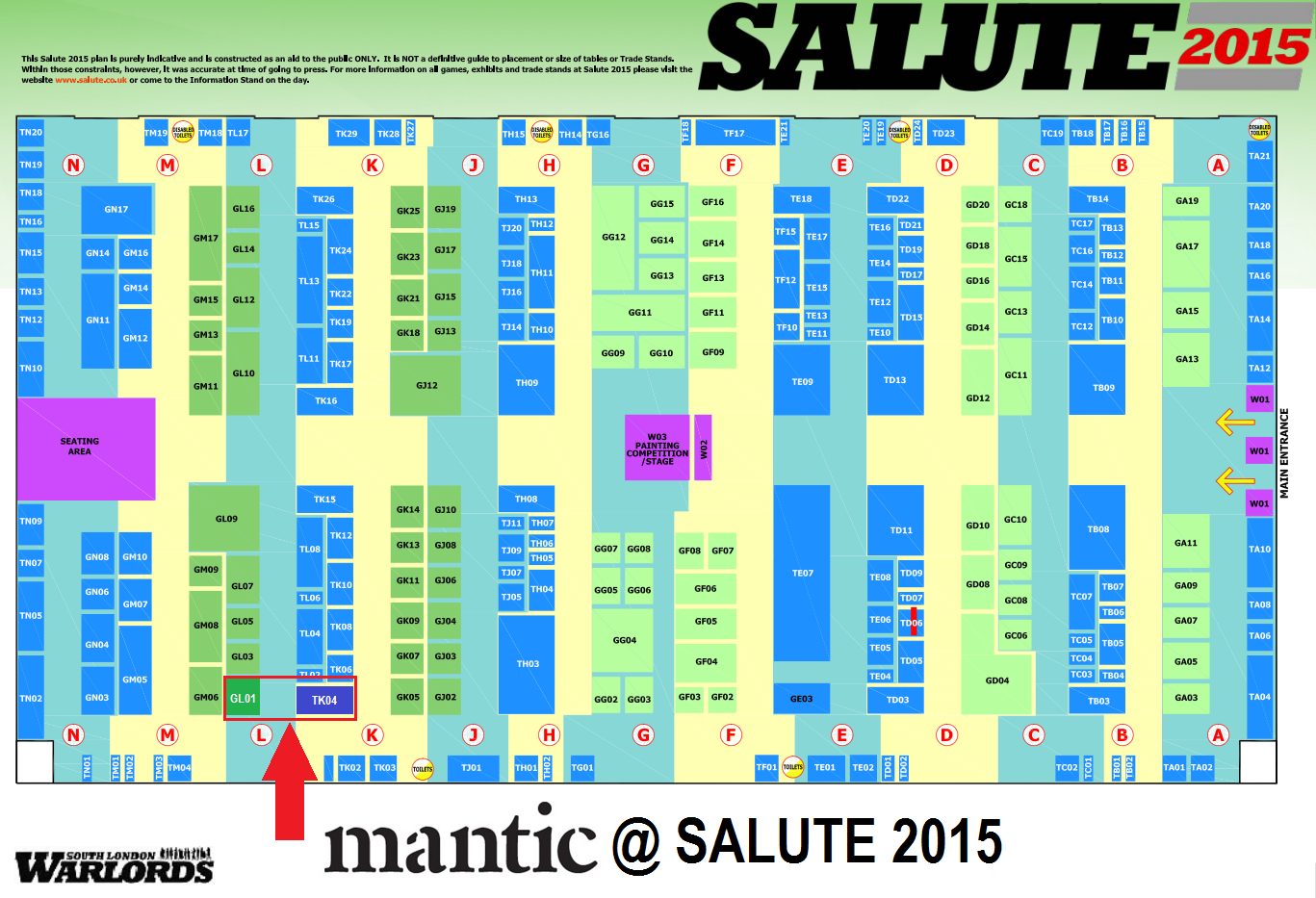