Tale of a King: Clash of Kings Road Trip Part 14

The Midlands Regional – Clash of Kings 2015 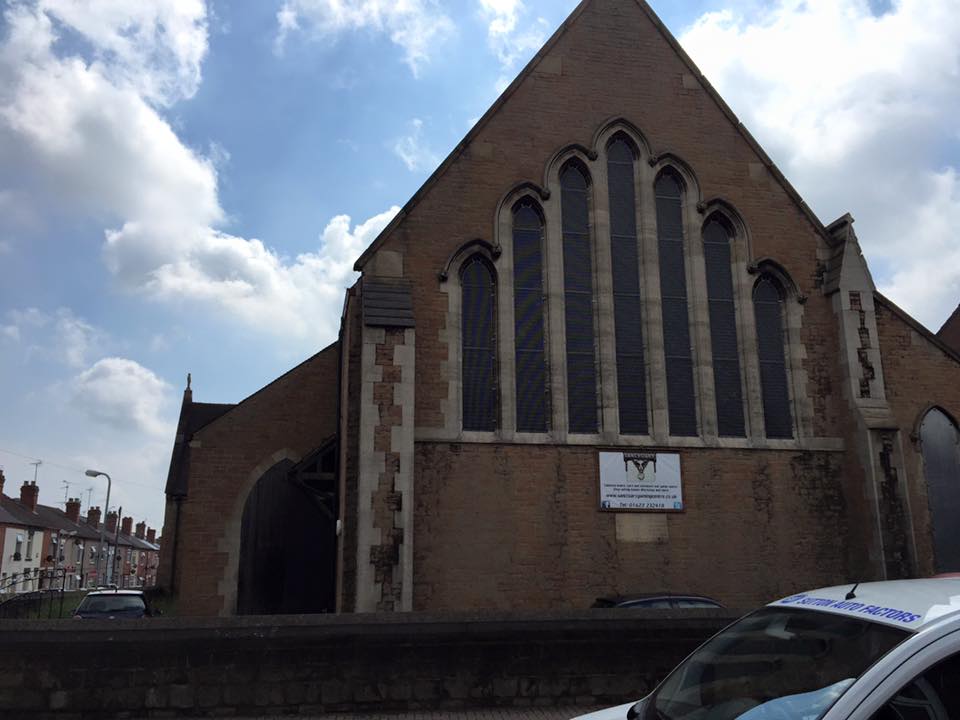 The final Clash of Kings Regional was held at the Sanctuary Gaming Centre on 4th July. It’s a shame I rested the Basileans for this event as they would have felt right at home but instead I borrowed the Ogre army that Dan King took to the Northern Regional as a change of pace. 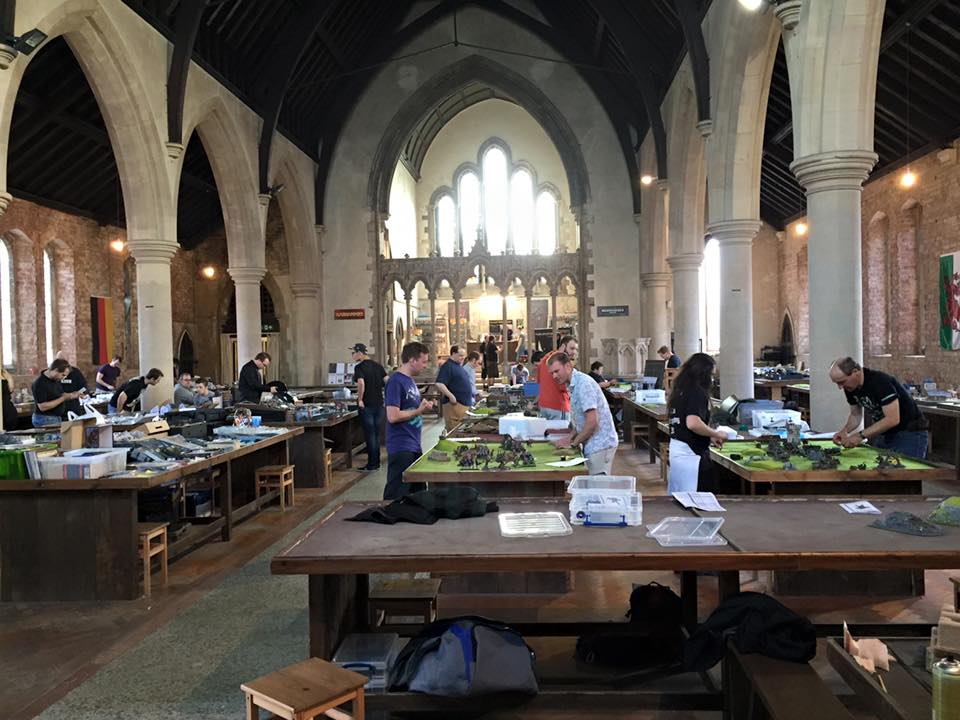 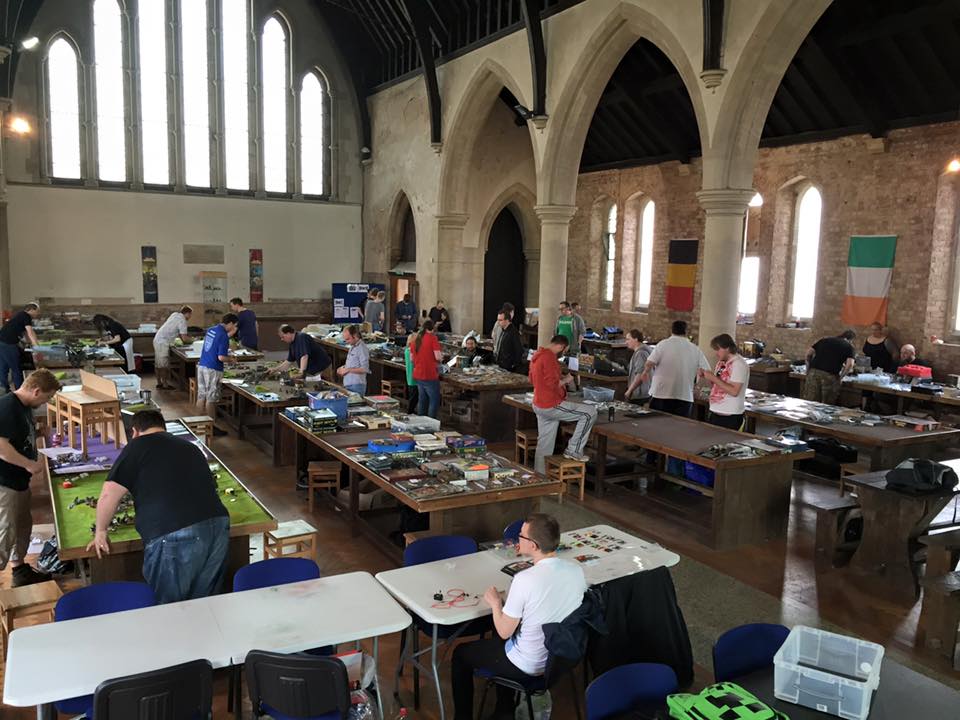 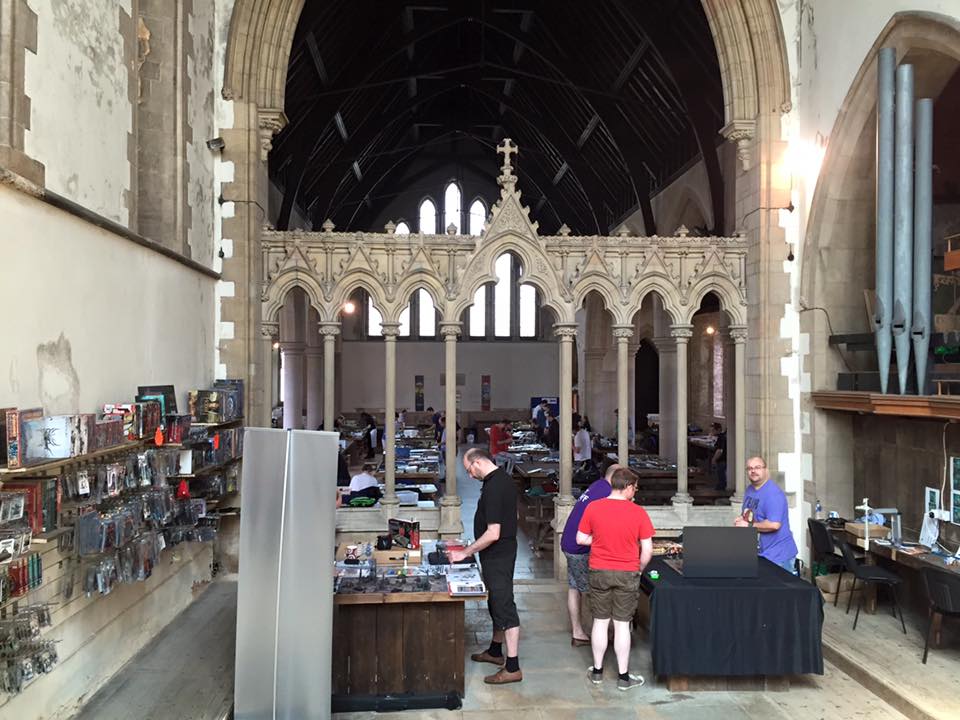 As you can see the venue was pretty busy even at 10am when I took these pictures. Along side our 10 player Kings of War event there was a Wargaming Bring and Buy/Carboot sale, Alessio was in showing off his new Terminator Genysis game and the venue had it’s demo copy of A0S to show people. But all this footfall really benefited us as well as I gave away loads of the mini 1st Ed Rulebooks to people who saw us playing

So after a couple of last minute drop outs we were down to 9 players plus me. So 10 in total – double figures again which I’m still really happy with. After the pre-Event brief I did the usual random draw for first round using coloured dice drawn out of a hat (or cupped hands!). I’d dodged Dan first round and drew Pathfinder Leon’s Elves but poor Rich Armstrong from the Customer Service Team drew the Big Dog Round 1!! Rich has just got into Kings of War and had 1 practice game before the event… still they say you only learn by playing better opponents! And school was about to begin!!

Dan’s Ogre army that I was borrowing: 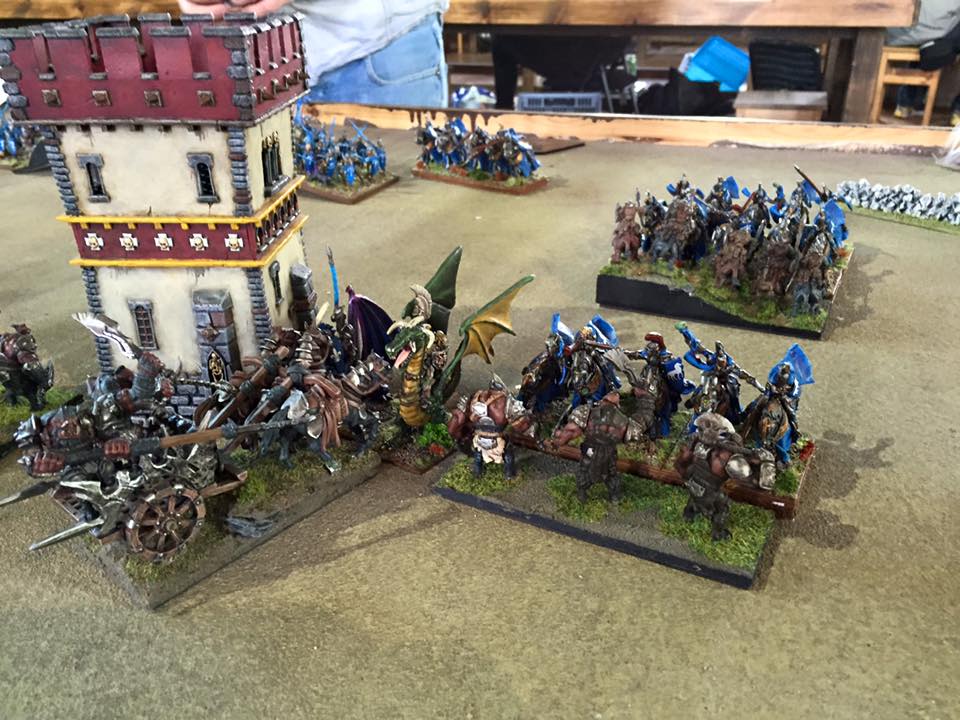 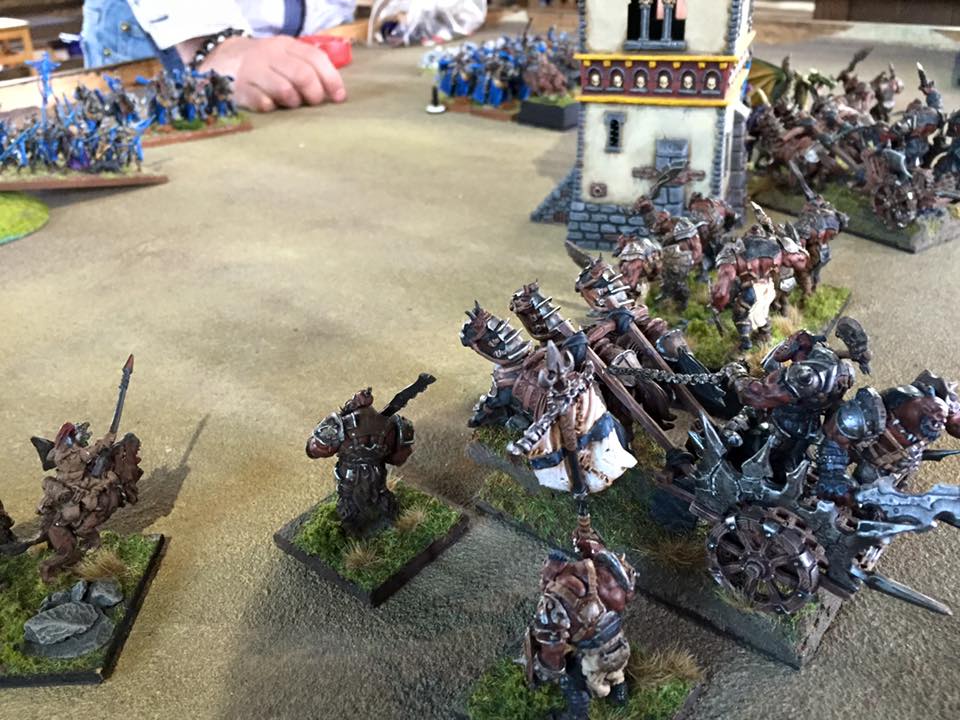 Game 1 didn’t fair so well for the plucky Ogres – even though Leon left his Warmachines wide open to be charged by fleabags and flying  chariot turn 2 – his superior movement allowed him to get round the sides and rears of my units and I think he removed all my toys in 6 turns!

An amusing couple of combats saw a Horde of Elf Spearmen charge a single Ogre Warrior… doing no damage! Later the horde charged an Ogre Regiment in the front whilst a unit of Drakkon riders charged in the rear – combined they did 21 points of damage… then Leon rolled double 1 for Nerve!! Unfortunately a little too late but then there is always a chance in Kings of War even when your unit looks done for! 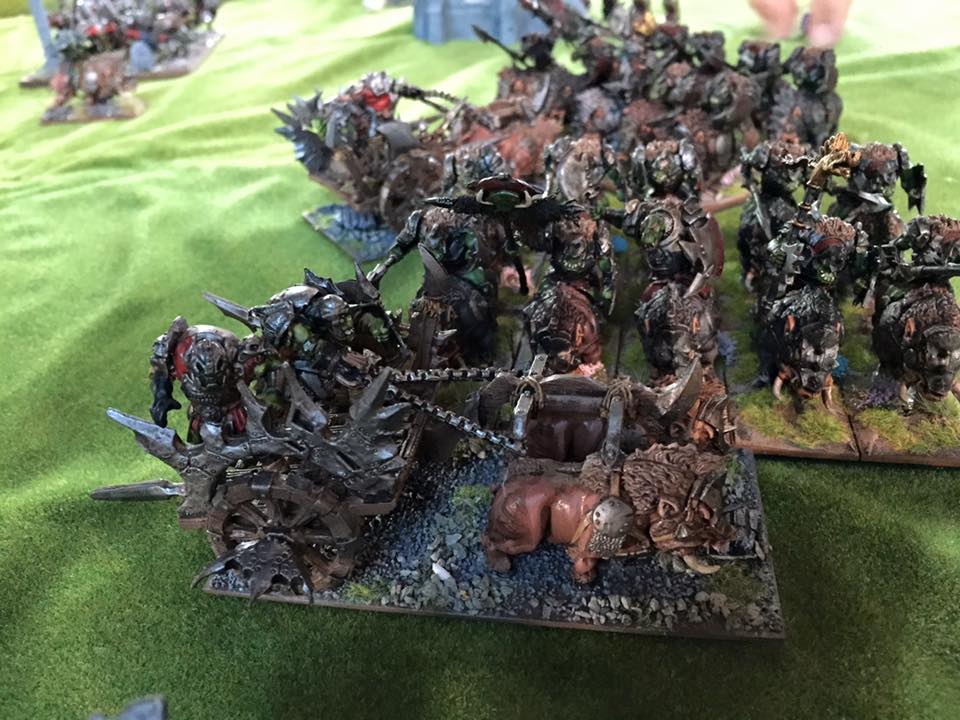 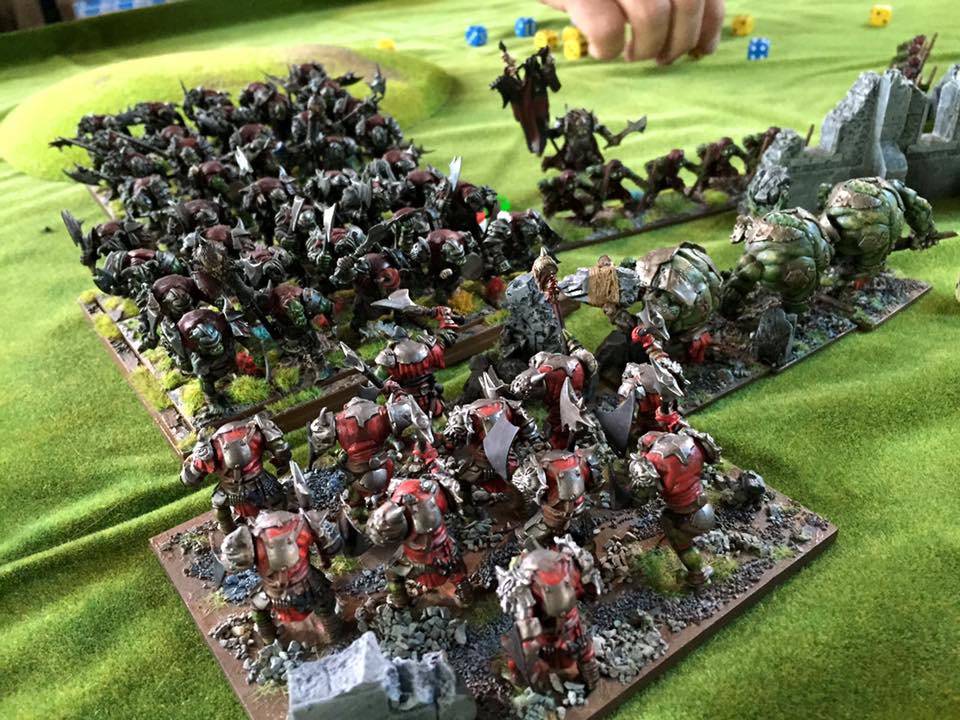 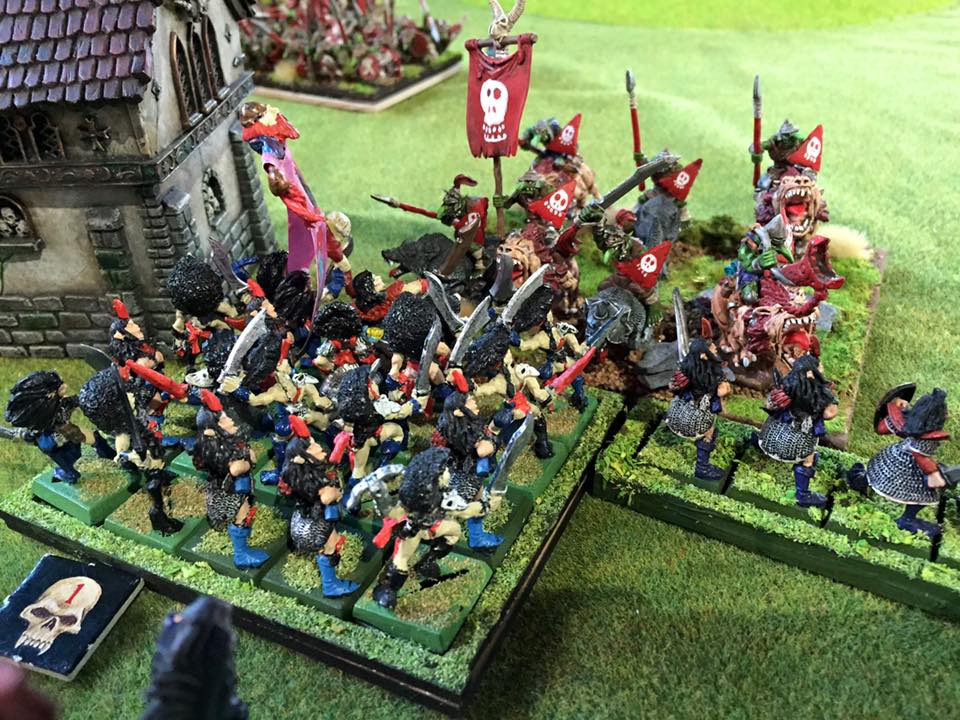 Game 2 me and Rich played out on the bottom table. Ogres vs Ogres at Pillage. A very close game. I ended up winning 16-4 because I held more objectives at the end of the game. I killed 855 points and Rich killed 545 points of my army. My Ogre Army standard with the Totem of Doddsy for an 18″ inspiring range was massive in this game as it provided the edge I needed to grind out the win! 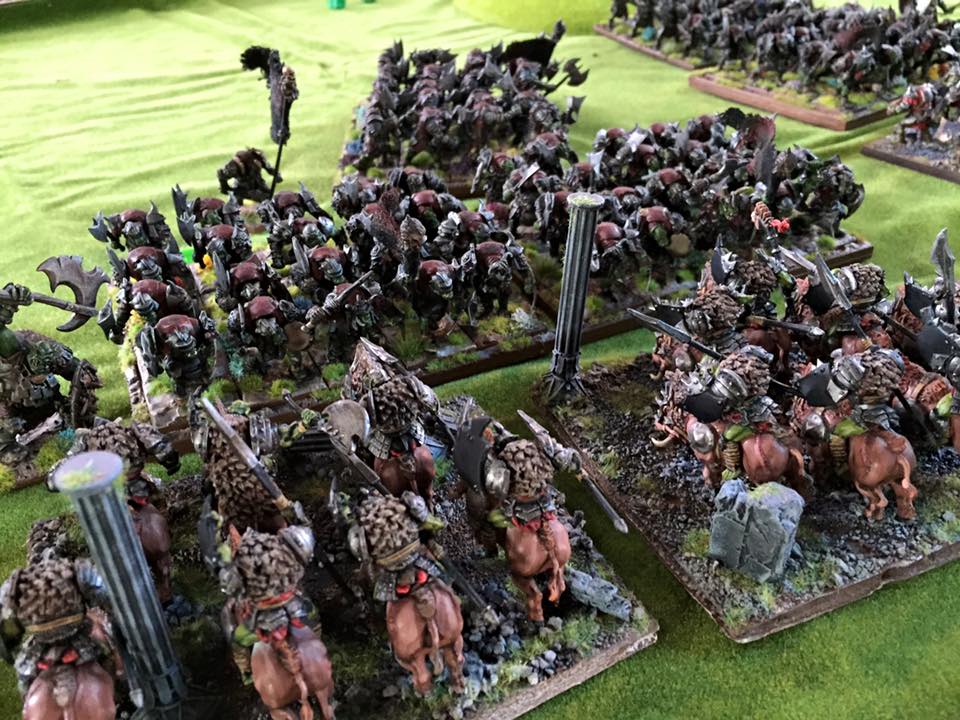 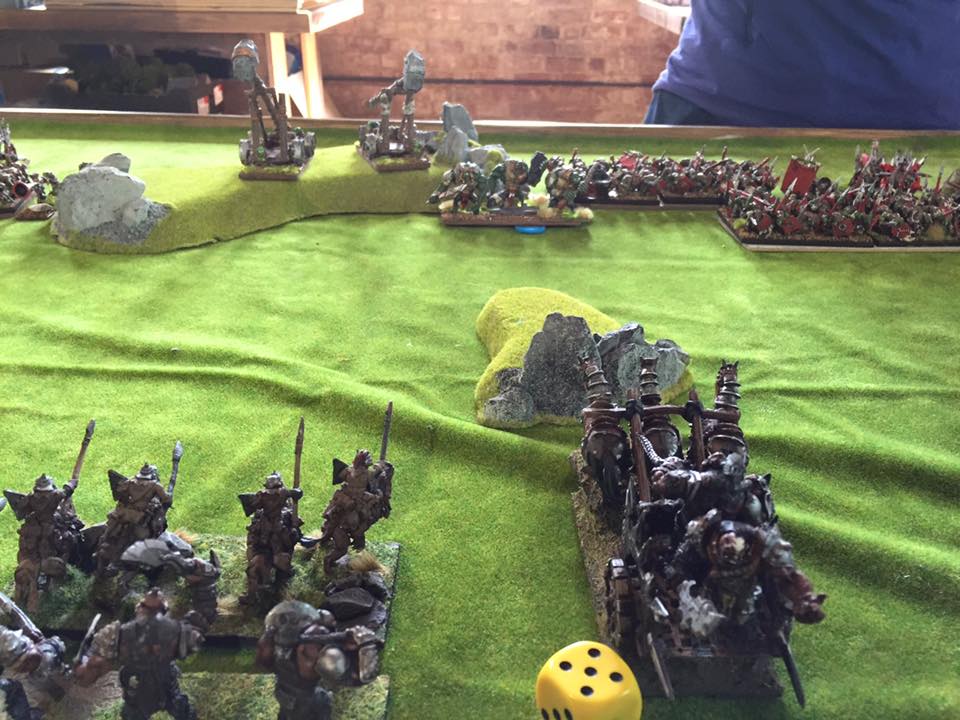 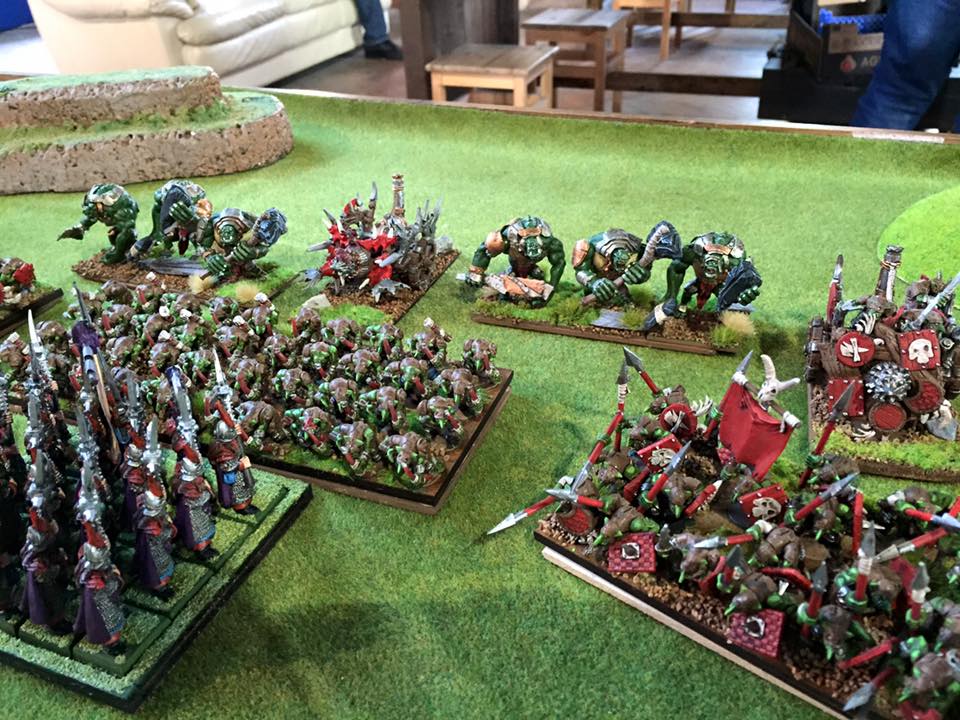 My final game saw me drawn against Rob Burman’s Goblin army at Kill & Pillage. I may have let out a small grown when I realised it was Goblins as they have so many Solid Units to claim objectives, backed up by hard hotting trolls/mincers and Warmachines.

However the Ogres charged through the storm, battered some Goblins and managed to beat enough up to claim a win! 17-3 to me, I killed 1200 points of Goblins whilst Rob got 750pts of Ogres.

Ogre of the Match goes to a single Ogre with two-handed weapon who managed to hold a Regiment of fleabag riders for 3 turns, routed them before turning his attentions to the Wiz who had also been Zapping him and killing him as well! 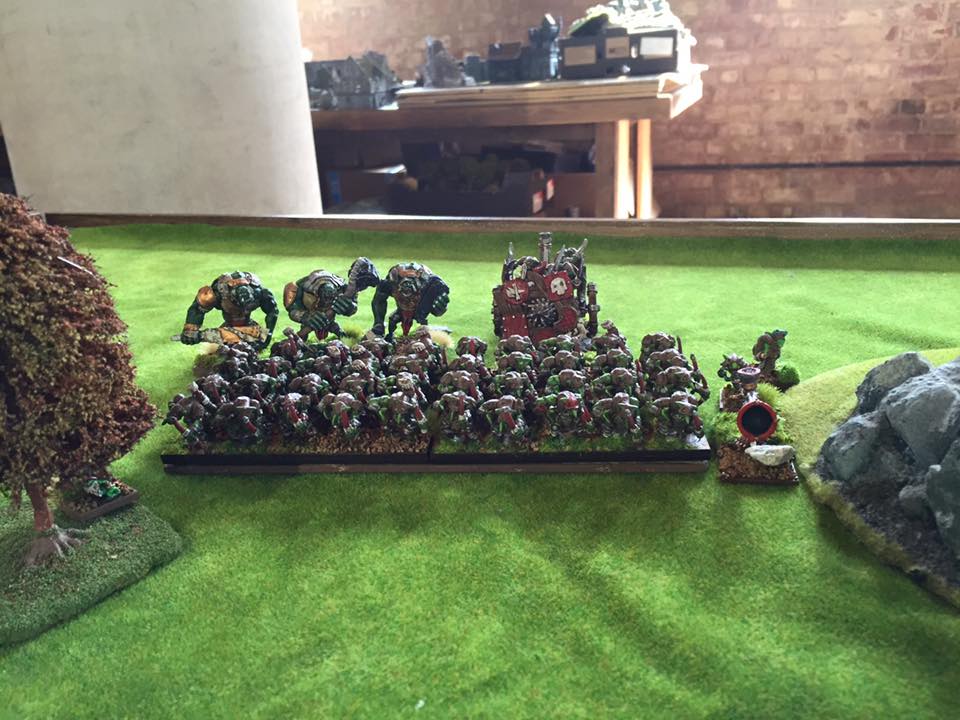 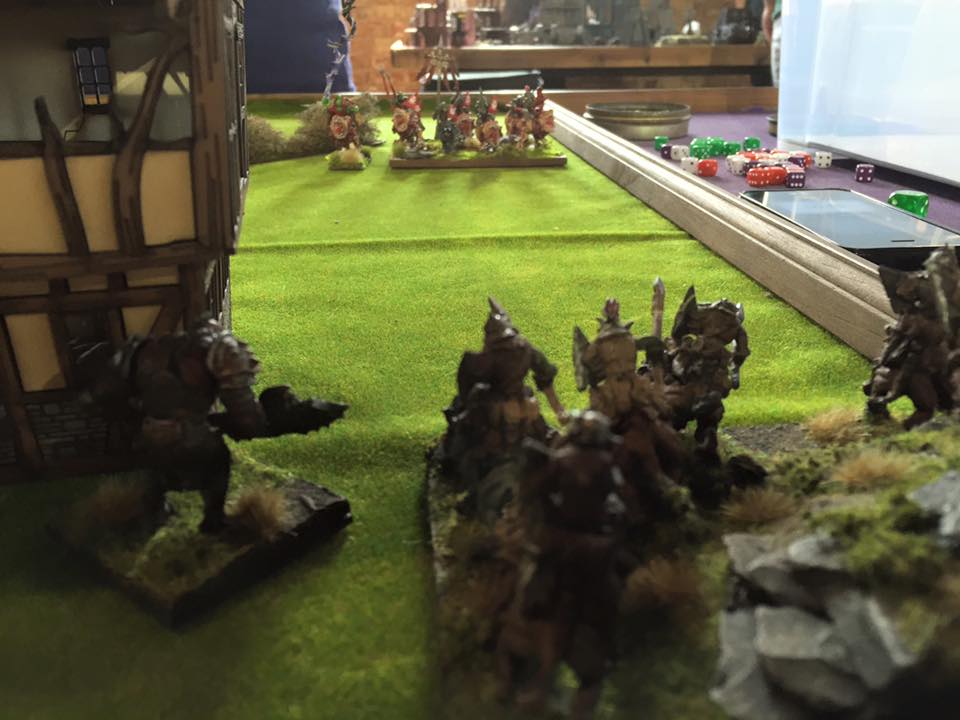 Happy with 4th as it meant I didn’t have to disqualify myself (Mantic Staff not allowed to win prizes of value) and considering I’d never played with the army or Ogres before.

Rich had a great day and defended the honour of the Mantic Customer Service Team by winning their 4th Wooden Spoon in 4 Events (all with Ogres!). He’s not disheartened and already started writing up his thoughts on the event.

Congratulations to Dan for winning, gaining the Regional Champion Crown and free ticket to the Final!

Thanks to all the entrants for taking part, don’t think there was a single rules dispute all day which is great for me and it looks like everyone had a good time!

Also thanks to Richard Lacey and the rest of the Sanctuary Gaming Centre for hosting us. 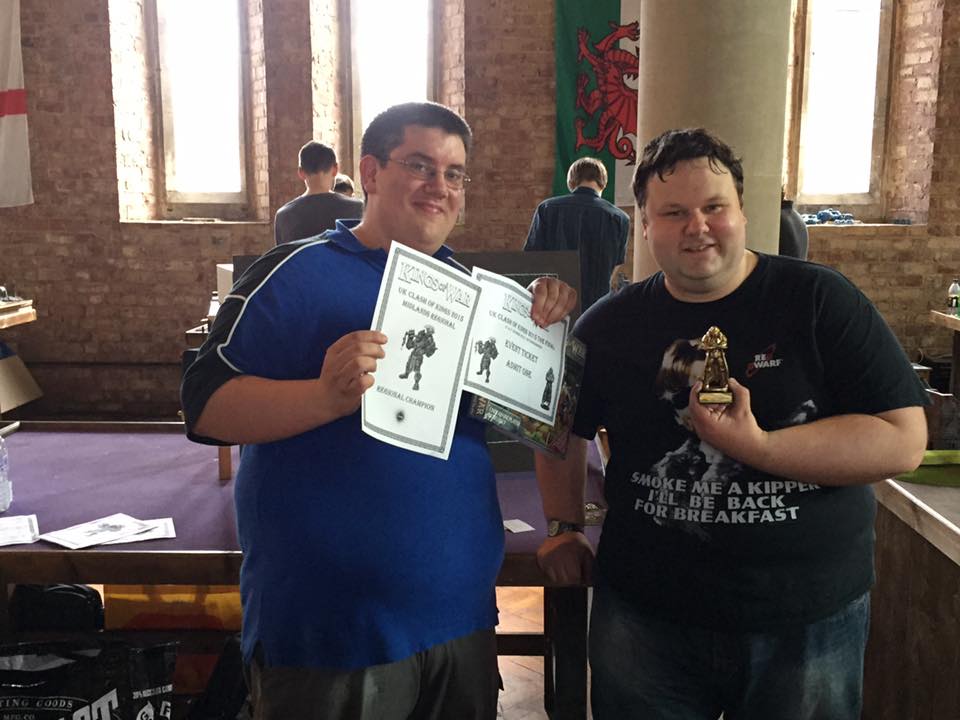 Most Sporting: Rob Clarke (3 out of 3 votes) 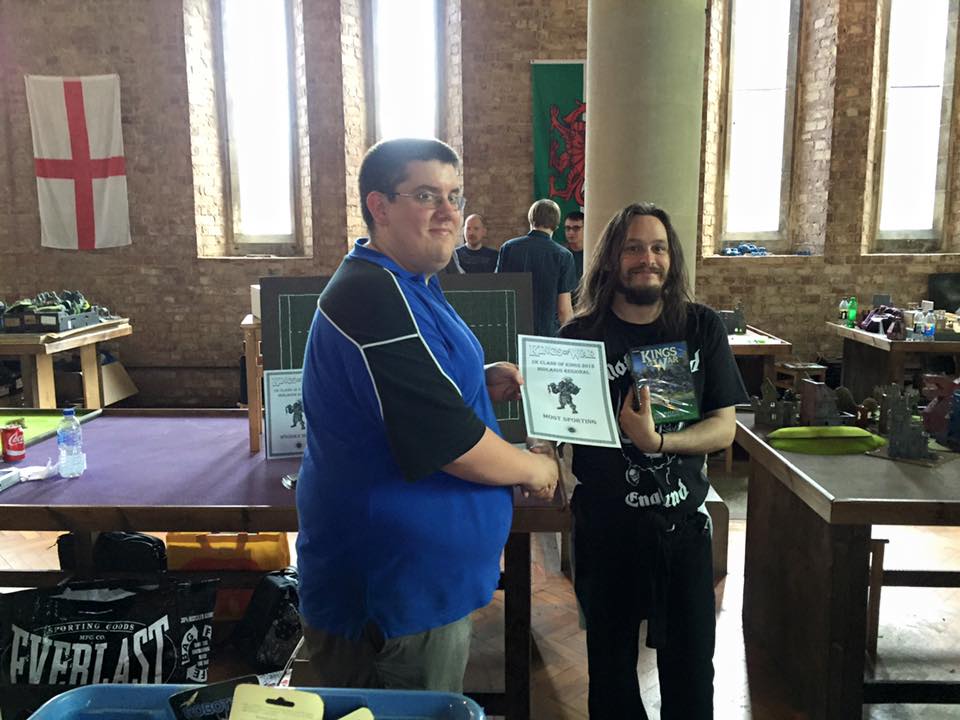 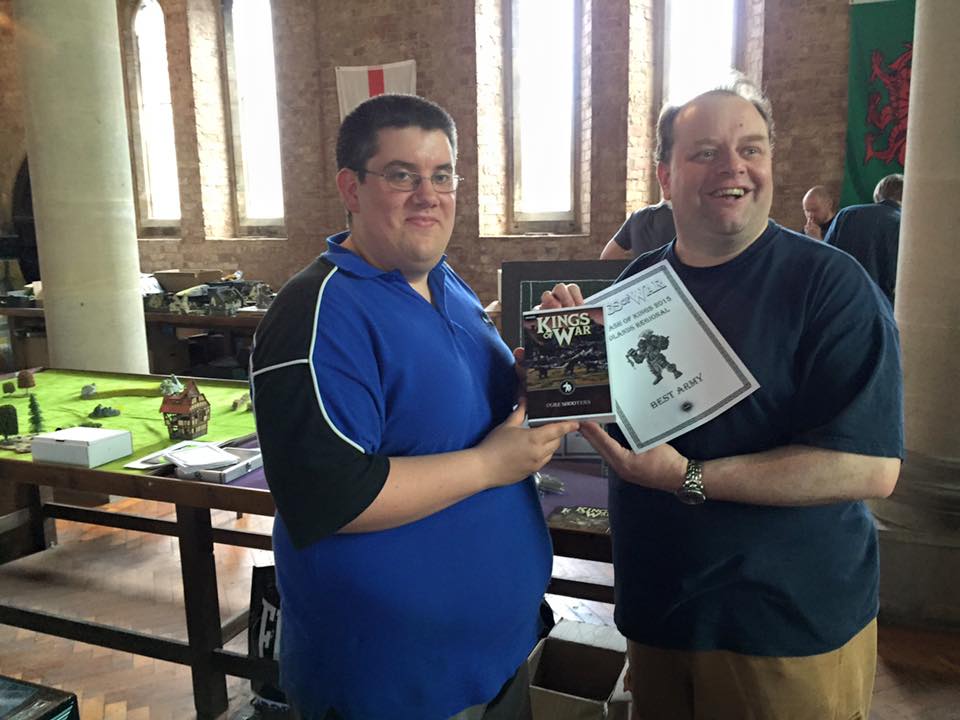 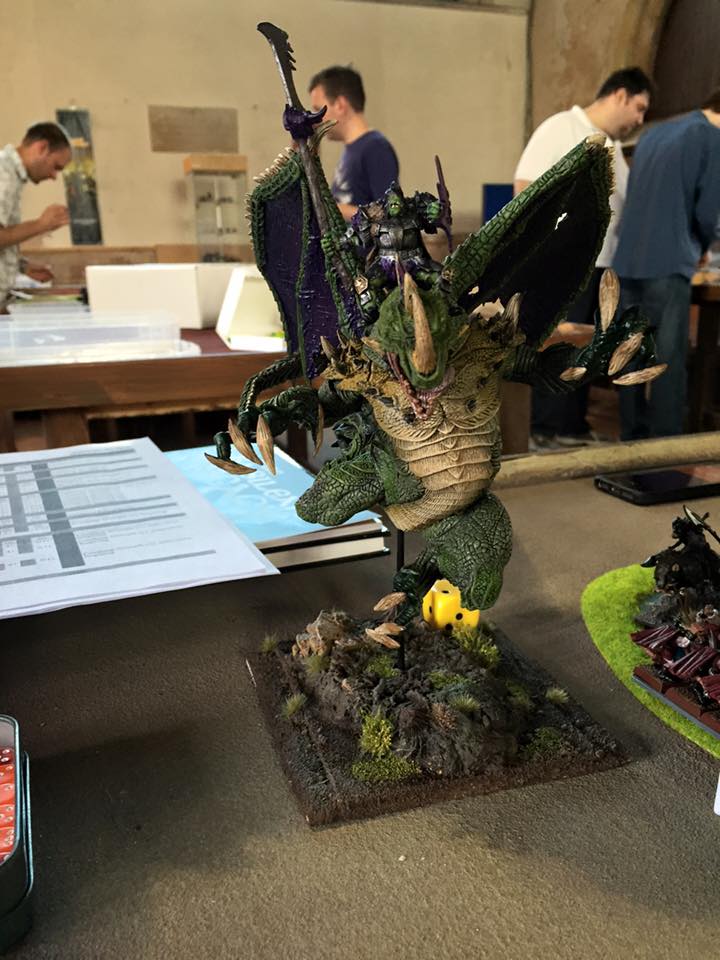 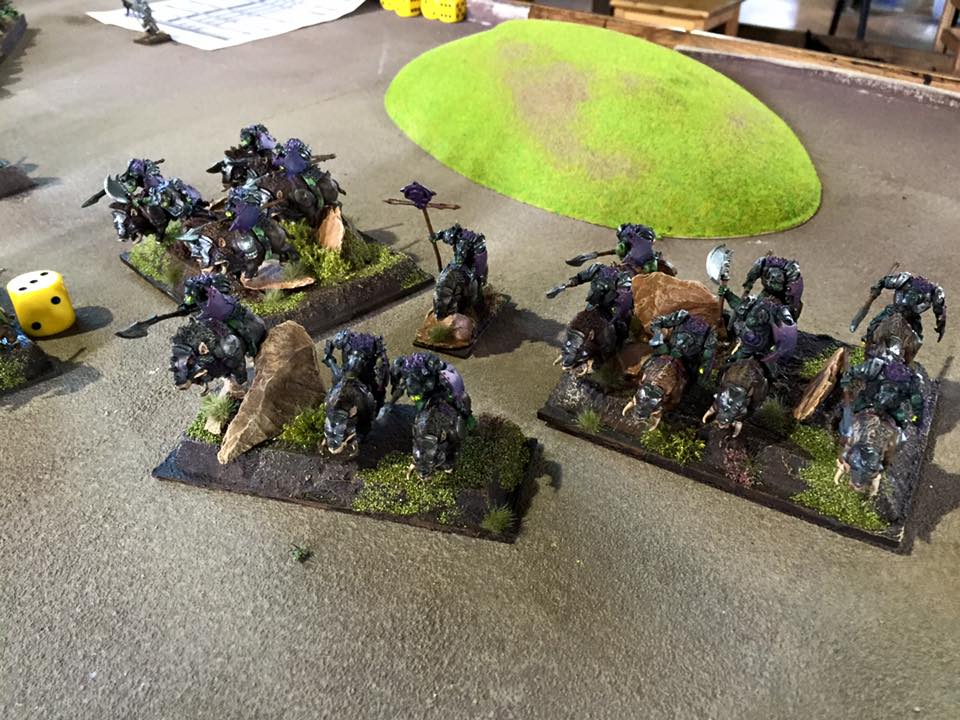 This was Dan’s last chance to win a free ticket to defend his National Title at the Finals in October so he rolled out his A-list! We last saw his list at the 2014 Final. It’s all made out of Mars Attacks Spiders & Ants with Zzor atop sprayed in an Iridescent spray paint to make it shimmer purple-green depending what angle you few it at. 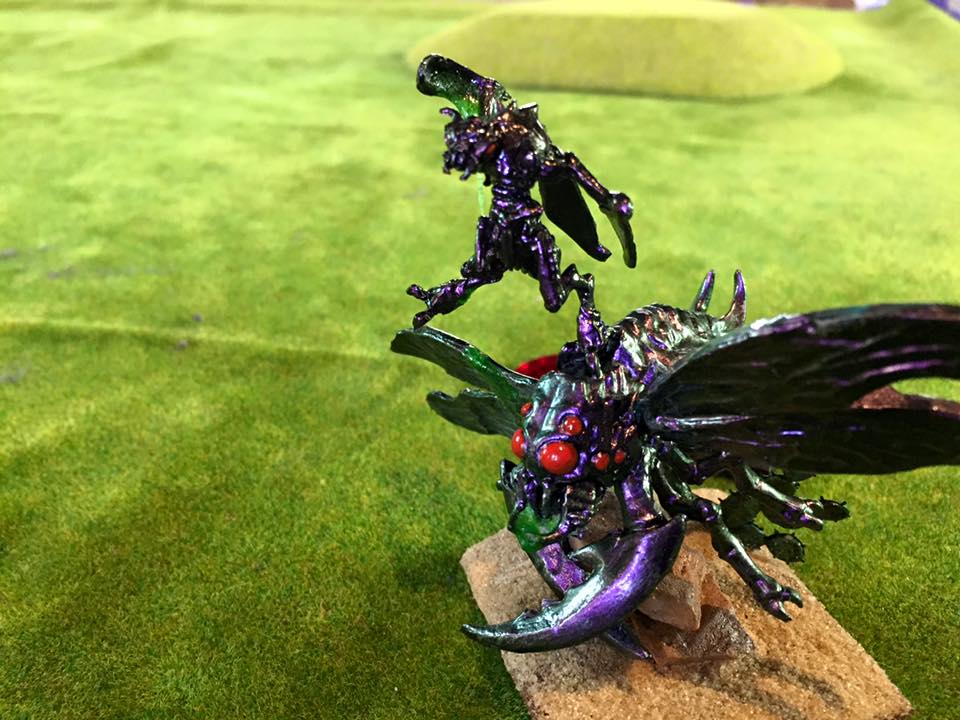 I’m sure you are all excited for 2nd Edition, I know I am! Already thinking about a new infantry based army…

Well don’t forget the National Final being at at Sanctuary Gaming Centre on October 3rd/4th.

ANYONE CAN TAKE PART – not just those 6 who won a Regional. They just get a free ticket!

We already have 13 entrants plus myself down taking part and plenty of space for more!

More details can be found on our Facebook page EVENT LINK

And tickets are on sale on the webstore TICKET LINK

Hope to see you there!